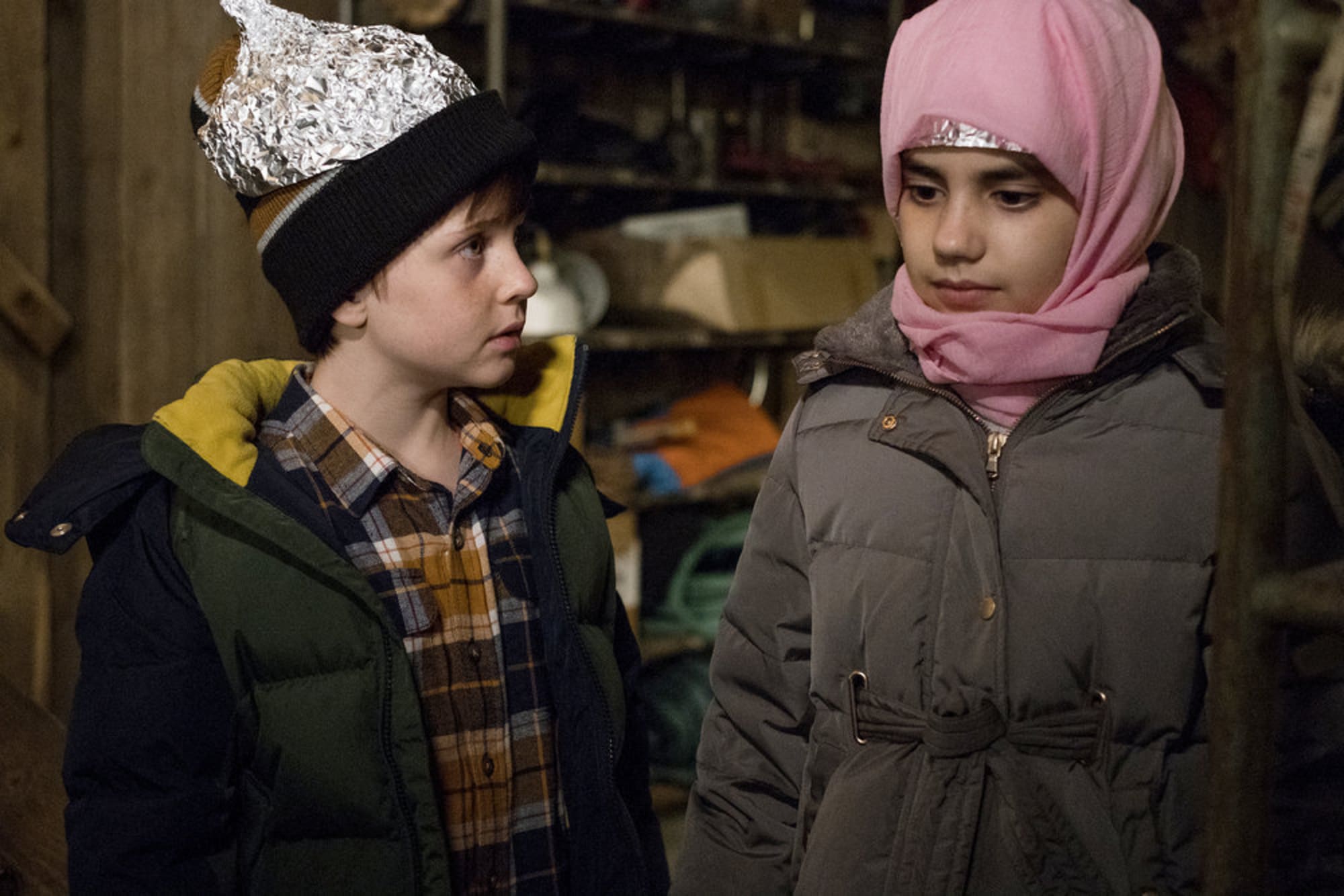 This week’s episode of Resident Alien starts off wonderfully with a dream sequence of Harry, in full alien form, with a wife and baby-alien, being accepted by the town all to the tune of the “Cheers” theme. The tranquility is broken up by Harry’s now-found device killing every human. It’s a wicked way to start the episode and further highlights the habits that Harry is adopting in his human form. Such as dreaming.

The gags are strong in this week’s show, which sees Harry stealing Jay’s burrito, his first kiss with a woman (Darcy) which goes as well as expected, and his inability to grasp the concept of basketball or athletics in general.

The show-stealer this week goes to Sheriff Mike “Big Black” Thompson and his many interactions. Harry drops the line of the episode (below) while dealing with the sheriff, only to have Sherrif Mike nearly match that moment when he pulls over young Max and Sahar who are on their way to break into Harry’s house. Turns out the sheriff is an aspiring cryptozoologist.

The episode sees the kids steal Harry’s keys and make copies, all so they could break into his cottage. They do this by taking advantage of a dinner that his parents set up, and invited Harry to. The entire dinner scene with Max, his parents, and a tag-along Darcy was beyond great. Sahar (played by Gracelyn Awad Rinke) is quickly becoming a scene-stealer, especially with her trip to the drug store to get the keys copied.

This brings up another great Sheriff Mike moment, going into graphic detail about how if he doesn’t buy a particular Hot Wheels car, a young child will die. The writing on this show continues to deliver.

We also find out that the two characters who killed an alien-eye-witness the week before aren’t aliens, but are (possibly) secret agents with the U.S. government looking for Harry. Though they don’t know Harry is Harry.

The tone of this week’s episode shifts when Harry joins Asta and her father to give Asta’s grandmother a shot on a nearby reservation. Harry outs Asta’s secret that she’s the mother of Jay, which does create some tender scenes between Asta and her father and Asta and Harry.

All of this episode is made infinitely better when the kids break into Harry’s home and get zapped by one of Hary’s devices. Harry discovers them and feels for a pulse only to be disappointed to find that yes, they are still alive.

If that wasn’t a wild enough twist to the episode, it turns out Human-Harry has a real wife, making things for Alien-Harry all the more complicated.

This episode and the first season are really hammering home that Harry has a lot of loneliness and depression he’s working through, especially in this episode. It’s not really clear if Harry actually feels these things in his true alien form, or if he’s only feeling these things now that he’s human.

Perhaps he finally understands these feelings due to his human form.

Either way, he’s clearly struggling with being alone and away from home. That’s not all, as we also find out that Harry is grieving the loss of his wife, who died before he traveled to Earth. In fact, he flat out says he took his mission to destroy humanity because his wife died. If genocide isn’t a clear sign that he’s depressed, then nothing is.

This is juxtaposed nicely with Asta and her family, who not only embrace Harry warmly but are very understanding of Asta’s revelation that the baby she gave up is Jay. Both Harry and Asta are struggling with loneliness in their lives but from two different places.