Do you believe in ghosts? If you do, it seems you’re not alone. And here in the Hudson Valley of New York State, our history goes way back, and so do the stories of ghosts throughout some of our historic buildings. I have friends that swear they can “feel a presence” in certain old houses. My house dates back to 1865, and I’ve been told by some of my more “sensitive” friends that I have a ghost. I’m happy to say it hasn’t made its presence known to me.

One of the coolest old buildings in Poughkeepsie is The Chance Theater on Crannel Street. The Chance was originally opened as the Carroll Players Playhouse in 1912, showing mostly silent films. It’s had many different incarnations since then, but it’s been a music venues for a good part of our lifetimes. Imagine the history in that building. And the ghosts.

Full Moon Paranormal will be conducting a 5-hour investigation of the Historic Chance Theater on Saturday, April 3. Originally, I thought that I would write this article because they were opening up the investigation to 20 members of the public, but that sold out quickly. So, now I suppose that we’re going to have to wait and see what they find. I don’t know about you, but I’m super curious to see the results of the investigation.

There are plenty of other haunted music venues around America. Check those, and some fascinating music conspiracy theories and curses and legends below:

Haunted Rock Venues: The Stories of 21 Creepy Clubs and Arenas 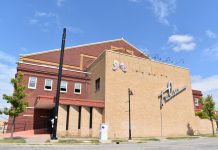 Green Country Ghosts: the most haunted places across Tulsa – kjrh.com

Do you dare step inside? 7 supposedly haunted spots in New England – The Providence Journal

So sweet. Tell her Happy Birthday! But @satori_hawes birthday is the 21st. 😘RT @SissyHand: (cont) tl.gd/notea5