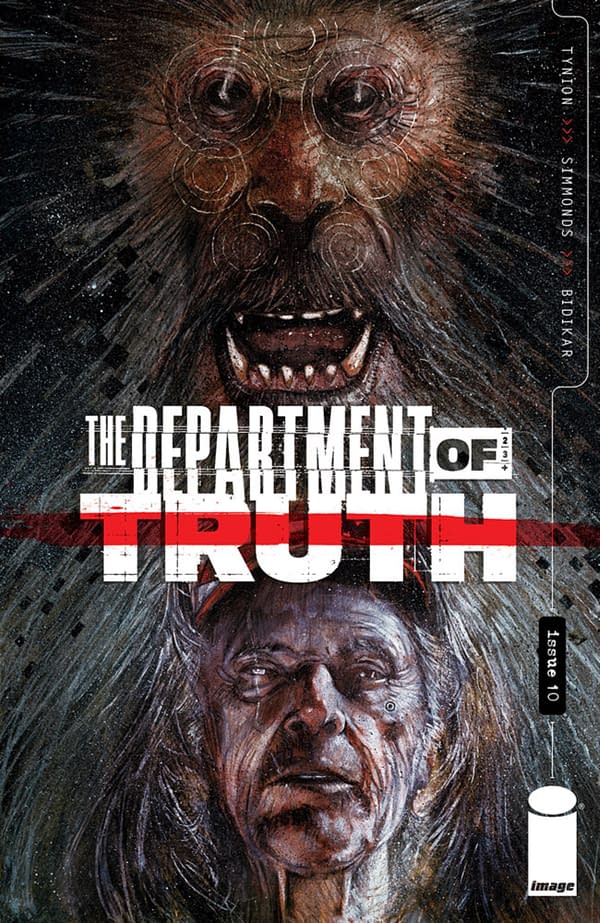 The Department Of Truth has been a massive comic book smash from James Tynion IV and Martin Simmonds, in a world where if enough people believe a conspiracy, he comes true. The Department of Truth is trying to measure, manage and contain all the changes, led by Lee Harvey Oswald. And in June? The comic book will be looking towards Bigfoot.

Bigfoot is an ape-like creature that is purported to inhabit the forests of North America. Supposed evidence of Bigfoot’s existence is based on a number of disputed video recordings, audio recordings, photographs, visual sightings, casts of large footprints, etc. Some of these are speculated or known to be hoaxes. Folklorists trace the figure of Bigfoot to a combination of factors and sources, including folklore surrounding the European wild man figure, folk belief among Native Americans and loggers, and a cultural increase in environmental concerns. Within the fringe subculture of cryptozoology, Bigfoot is considered a cryptid, but the majority of mainstream scientists have historically discounted the existence of Bigfoot, considering it to be a combination of folklore, misidentification, and hoax, rather than a living animal.

But in the world of the Department Of Truth, there should be Sasquatches everywhere…

In other Department Of Truth news, the first two volumes of the collections will contain #1-#5 in Volume 1 and #8-#12 in Volume 2. What of #6 and #7? Those two are interstitial guest-artist issues with Tyler Boss and Elsa Charretier that will be collected with the other guest issues later on. since they don’t take place sequentially with the Martin Simmonds issue).

Founder of Bleeding Cool. The longest-serving digital news reporter in the world, since 1992. Author of The Flying Friar, Holed Up, The Avengefuls, Doctor Who: Room With A Deja Vu, The Many Murders Of Miss Cranbourne, Chase Variant. Lives in South-West London, works from Blacks on Dean Street, shops at Piranha Comics. Father of two. Political cartoonist.