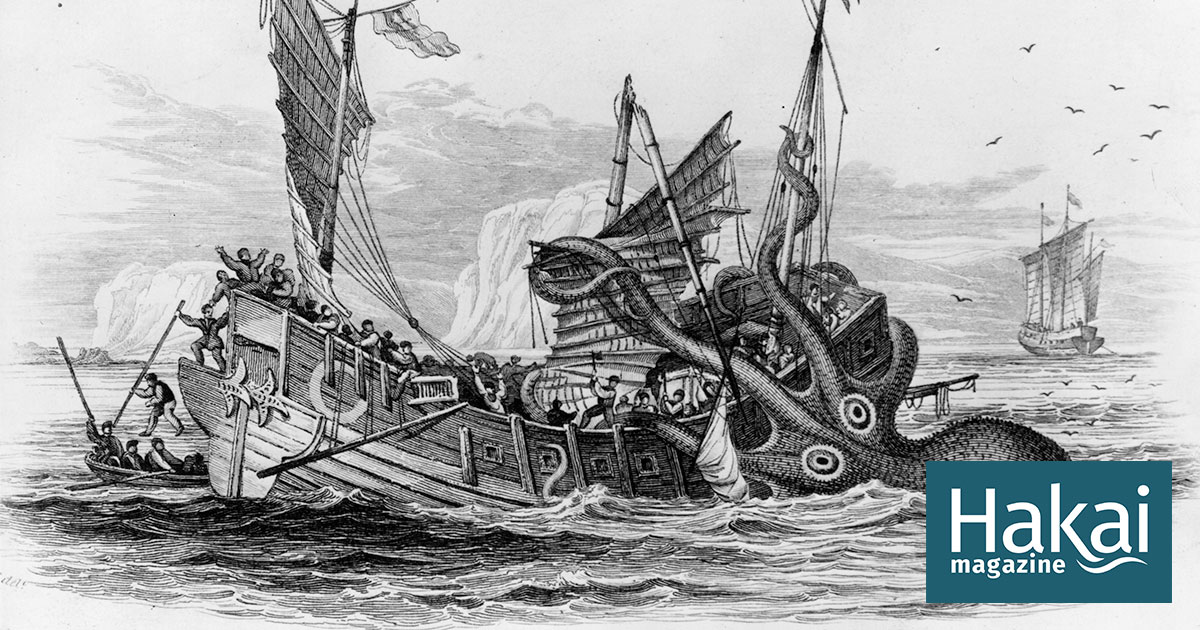 From the safety of land, it’s easy to romanticize the ocean. Its shades of blues and greens evoke paradise, while its surface rises and falls hypnotically. But these mesmerizing qualities belie the ocean’s perilous nature. For when you leave terra firma for the sea, you’re at the mercy of its mercurial moods. With every storm, death rears its head, confronting you with a fate too terrifying to imagine. Perhaps that’s why the ocean lies at the heart of countless legends: people want to seek answers from the unknown, to be enthralled by the horrible. From a monster that unnerves a ship’s hardened crew to a luxury liner that simply disappears, here are five tales of depravity and horror set on the deep blue sea.

In 1872, a brigantine named the Mary Celeste set course from New York City to Genoa, Italy, carrying seven crew members, the captain, his wife, and their two-year-old daughter. One month later, a British ship spotted the brig, which should have already reached its destination, drifting in the North Atlantic, hundreds of kilometers from land. When its crew members boarded the Mary Celeste, they found weeks’ worth of food, shoes, and other personal belongings. An unfinished breakfast, likely the child’s, was still sitting on the dining room table, covered in mold. To the British seamen investigating the Mary Celeste, it was as if those on board had single-mindedly abandoned ship. Yet despite some seawater sloshing in its hold, the brig was deemed seaworthy. Below deck, the seamen found 1,701 barrels of industrial alcohol, nine of them empty. Could their noxious fumes have set off sparks, scaring everyone on the Mary Celeste into the lifeboat? If so, where did they plan to go, given they were so far from land? No one can say for sure, because the crew, the captain, and his family were never seen again.

The tale of the Mary Celeste continues to obsess ghost ship fanatics, as it may be the closest true analog to the centuries-old legend of the Flying Dutchman, the mythic vessel that is cursed to sail the ocean forevermore. As such, it has been fodder for many storytellers. In 1884, Arthur Conan Doyle penned a fictitious account of what transpired on the Mary Celeste in a short story unrelated to Sherlock Holmes, and in 1935, the ship inspired one of the first entries to Hammer Film Productions’ horror cannon with The Mystery of the Mary Celeste, starring Bela Lugosi of Dracula fame. In that retelling, those on board get murdered one by one. Could that have been how the real crew and the captain’s family met their fate?

Monster from the Deep

Many a sailor has recounted tales of monsters from the sea. Perhaps with whisky in hand, one might recall the time when a kraken, a giant squid from Nordic legend that’s now known to be based in reality, nearly capsized his boat. Or he tells a yarn of a cryptozoological creature with unworldly dimensions. One particular legend of such a creature comes from 1848, when men aboard the Royal Navy’s HMS Daedalus encountered a Nessie-like leviathan in the South Atlantic. It was an “enormous serpent,” Captain Peter M’Quhae noted in a report, “its colour a dark brown, with yellowish white about the throat. It had no fins, but something like the mane of a horse, or rather a bunch of seaweed, washed about its back.

“It passed rapidly, but so close under our lee quarter that had it been a man of my acquaintance I should have easily recognized his features with the naked eye.” This account, as well as others aboard the Daedalus, spurred a media flurry, and in subsequent years many sailors reported seeing the serpentine beast.

But despite M’Quhae’s confident sighting, no such creature has been found in the ocean—at least not in our epoch. Using an artist’s rendering of the monster from the time, Gary J. Galbreath of the Skeptical Inquirer determined, anticlimactically, that the crew likely spotted a large baleen whale—a sei, to be specific—as it skimmed the surface in search of food.

The Case for Cannibalism

In 1844, an Australian lawyer looking to impress his fellow yachtsmen back home purchased an aging—but importantly British—yacht dubbed the Mignonette in England. There, he found a crew to sail the boat back to Sydney, and in doing so, he inadvertently secured the fates of four men: Thomas Dudley, Edwin Stephens, Edmund Brooks, and Richard Parker.

As the Mignonette headed toward the Cape of Good Hope, a violent storm hit. Built of wood that had begun to rot, the yacht sank in a matter of minutes. In their haste, the four seamen escaped to a four-meter dinghy with two tins of turnips but no water. The dinghy drifted westward, toward South America some 3,000 kilometers away. But without water, the continent offered unlikely salvation. Days turned into weeks, and the men grew increasingly feeble. In such desperate circumstances, sailors invoke the custom of the sea, a grim proceeding in which men draw lots to decide who gets sacrificed for food so that his mates might survive. But rather than leaving it to chance, Captain Dudley and his first mate Stephens determined that Parker, a 17-year-old orphan who’d become delirious after drinking seawater, was the obvious choice. Dudley stabbed Parker to death, and the three remaining men dined on the young man’s flesh. Just four days later, a German ship rescued the survivors. Back in England, Dudley and Stephens were convicted of murder, though they were not the first seamen to resort to cannibalism. What made them distinct, however, was that they had abandoned the custom of the sea by choosing which man would be killed and eaten—a hubristic decision that defied the sailor code. But the survivors’ tale of desperation ultimately elicited the public’s sympathy, and Dudley and Stephens were spared the death sentence. For killing the teenager, they served only six months in prison.

What happened to Dudley and Stephens became enshrined in an infamous precedent-setting case in England, which determined the taking of a life can never be justified—even when it means saving one’s own.

Three years before the RMS Titanic sank, another behemoth sailed the ocean in opulent splendor only to meet a similar fate. In 1909, the 142-meter SS Waratah carried 211 people on its route from Australia to England. Outfitted with 100 first-class cabins, the ship carried enough food for a year and endless drinking water thanks to its desalination plant. But unlike the Titanic, it was not equipped with a radio, which was still a nascent technology at the time. Upon reaching Durban, South Africa, completing the first part of its journey, some passengers noted how stomach-turning their voyage had been. One person complained that the Waratah was top-heavy, making it roll and lurch at sickening angles. Another passenger dreamed that the ship would sink as it continued to England and so chose not to embark for the next leg of the trip. His nightmare was prescient, for between Durban and Cape Town, South Africa, the Waratah disappeared. And with no radio on board, there was no indication as to where the ship had gone. However, the sea off the coast of South Africa is known to be treacherous. Could a tempest have capsized the steamer? Yet in the 110 years since the Waratah vanished, numerous search teams have only found the wreckages of other ships. Why has this relatively young shipwreck continued to evade discovery?

As it sailed down the Strait of Malacca between Sumatra and Malaysia in the late 1940s, a Dutch freighter called the SS Ourang Medan sent out a chilling distress call that the officers, captain—possibly the entire crew—were dead. An incoherent spate of Morse code followed, after which the ship’s radio operator issued a final sign-off: “I die.” When a US merchant ship investigated, its crew found corpses strewn across the deck, their mouths fixed in grimaces and their eyes staring out, vacant. No survivors were found. As the US ship began to tow the Ourang Medan to port, smoke billowed from the freighter’s hull. The merchant ship severed the line connecting the vessels just before the Ourang Medan exploded and sank, burying the petrified Dutch crew in a watery grave. All evidence of the ship went down with them, allowing rumors to fill the void.

In a bizarre letter dated 1959, the assistant to the director of the CIA claimed that whatever befell the Ourang Medan could explain all of the “unsolved mysteries of the sea”: the myriad airplane crashes and shipwrecks, the “fiery spheres” observed falling into, and emanating from, the ocean. (It might be worth noting that the CIA had been experimenting with LSD during this time.) To add to the mystery, no entry exists for the Dutch ship in Lloyd’s Register, which has classified large merchant ships since the late 1700s. Without that key piece of information, conspiracy theories have taken hold. One claims that nerve gas, developed in wartime Japan, had been smuggled onto the foreign freighter by the Japanese military, where it leaked, killed the crew, and eventually ignited. Others, in all seriousness, point to the fantastical: ghosts or aliens who may have played a role in the demise of the Ourang Medan’s crew.

But without any evidence of its existence, is it possible that someone simply made up the Dutch ship, its distress call, and the events that transpired on it—perhaps someone from the merchant ship, which, according to Lloyd’s Register, did exist? But regardless of whether or not the events of the SS Ourang Medan ever took place, at least we have the grisly legend to keep us awake at night.