Lorraine Warren, paranormal investigator and demonologist whose life inspired franchises like “The Conjuring” and “The Amityville Horror,” has died. She was 92.

Warren’s son-in-law Tony Spera confirmed the news. Spera said on Facebook, “She died peacefully in her sleep at home.” He continued, “She was a remarkable, loving, compassionate and giving soul. To quote Will Rogers, she never met a person she didn’t like. She was an avid animal lover and contributed to many animal charities and rescues. She was wonderful and giving to her entire family. May God Bless her.”

Along with her husband Ed Warren, the couple founded the New England Society For Psychic Research. The duo investigated a number of high profile supernatural cases including the Lindley Street poltergeist, the Smurl haunting, the West Point ghost, the Perron farmhouse haunting, and the Amityville murders. The Warrens’ work has inspired films like “The Conjuring” franchise, the “The Amityville Horror” franchise, “The Nun,” and the “Anabelle” series. The couple also wrote several books based on their case files. Her husband died in 2006.

My dear friend Lorraine Warren has passed. From a deep feeling of sorrow, a deep feeling of gratitude emerges. I was so blessed to have known her and am honored to portray her. She lived her life in grace and cheerfulness. She wore a helmet of salvation, she dawned her sword… pic.twitter.com/Kn2E6ZO9fL

Vera Farmiga played Warren in “The Conjuring,” “The Conjuring 2,” “The Nun,” and the upcoming “Annabelle Comes Home.” The actress tweeted, “From my deep feeling of sorrow, a deep feeling of gratitude emerges. I was so blessed to have known her and am honored to portray her. She lived her life in grace and cheerfulness. She wore a helmet of salvation, she dawned her sword of compassion, and took a shield of faith. Righteousness was her breastplate, and she has touched my life so. Love you Lorraine. You’re waltzing with Ed now.”

“The Curse of La Llorona,” the latest film set in the Conjuring universe, opened Friday.

‘The Curse of La Llorona’ review: You expect the ghost of a 17th century scorned, murdering mama to be more terrifying 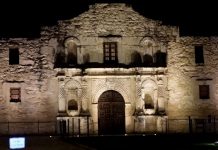