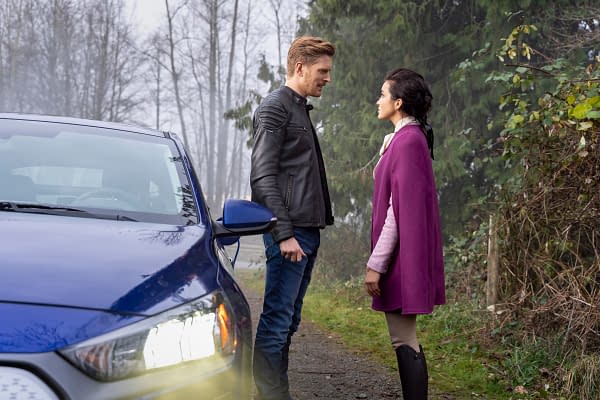 Welcome back to our weekly preview of The CW’s Nancy Drew, with a look at the eighth episode of the second season, “The Quest for the Spider Sapphire” (imagine how long that title would be if they kept doing the chapters like Riverdale is still doing). With only seven episodes to go until the “Drew-niverse” gets to meet Tian Richards‘ Tom Swift for a potential spinoff episode (we’re really looking forward to that), Nancy (Kennedy McMann) and the “Drew Crew” are still up to their elbows in the fallout from their battle with the Aglaeca- especially George (Leah Lewis), who would really like their body back full-time.  And as you’re about to see from the following preview images, episode overview, and promo, Bess (Maddison Jaizani) takes an unexpected trip down memory lane:

Nancy Drew Season 2, Episode 8  “The Quest for the Spider Sapphire”: OLD GHOSTS – Nancy (Kennedy McMann) and George (Leah Lewis) work together to vanish the ghost who’s been timesharing George’s body since they defeated the Aglaeca. Meanwhile, no one is more surprised than Bess (Maddison Jaizani) when a blast from her past comes knocking. Scott Wolf, Alex Saxon, Tunji Kasim and Riley Smith also star. Roxanne Benjamin directed the episode written by Lisa Bao.

Season two of Nancy Drew follows the legendary teen detective as she solves mysteries – both earthbound and supernatural – in her haunted hometown of Horseshoe Bay, Maine. Nancy (Kennedy McMann) leads a sleuthing team of unlikely friends: George Fan (Leah Lewis), whose clairvoyant heritage will emerge through her encounters with the paranormal; Bess Marvin (Maddison Jaizani), a con artist and heiress with multiple lady admirers; Ned “Nick” Nickerson (Tunji Kasim), Nancy’s ex and George’s boyfriend, a gifted mechanic with a tragic past; and philosophical slacker Ace (Alex Saxon), whose computer-hacking skills have caused secret troubles that will soon be exposed. In season one, the Drew Crew helped Nancy discover the stunning truth that Lucy Sable, the ghost who’d been haunting her all season, was her biological mother, and her biological father was corrupt billionaire Ryan Hudson (Riley Smith).

Season two is a direct pickup from season one, so it will span the autumn of 2019, during Nancy’s gap year before college. Ryan will attempt to redeem himself by forging a father-daughter bond with Nancy while keeping her parentage a secret from the rest of his powerful family. Nancy will also find a way forward with her adoptive father Carson Drew (Scott Wolf) by becoming an investigator for his legal practice. Her adventures will bring the Drew Crew standalone cases, new romances, and emotional journeys of self-reinvention as Nancy tries to navigate with both her biological parent and the man who raised her – but the compounding intrigue and menace of the Hudson family will ultimately force her to make a life-altering choice.

Serving as Television Editor since 2018, Ray began five years earlier as a contributing writer/photographer before being brought onto the core BC team in 2017.

A Photographic Journey Through Savannah, Georgia

Now it gets real emotional. #GhostNation. Get the tissues ready!

It’s always nice to have our friend #RevBillBean out to help us. #GhostNation