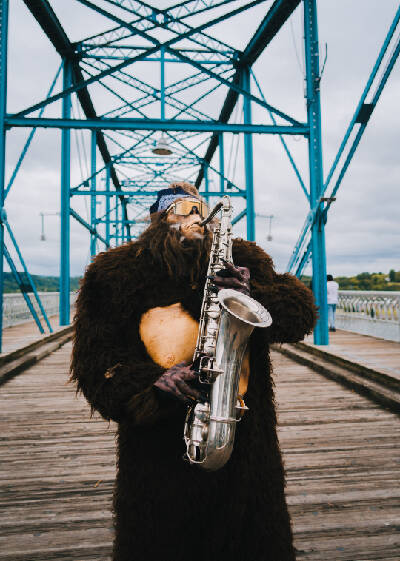 For decades, large ape-like creatures known throughout the world as Big Foot, Yeti or Sasquatch have been the stuff of legend, and the heroes of cryptozoologists everywhere. Up to now, they have been considered exceptionally shy and adept at disappearing quickly and avoiding capture, or even being photographed with any authority.

But Saxsquatch, the saxophone-playing creature, is doing his best to not only let people know he exists, but that there are others like him, and like him, they make pretty good music. His grandfather plays the guitar, and his sister plays the flute, he says, while his father and mother play the trumpet and cello, respectively.

“My whole family plays music,” the musician said via telephone from somewhere deep in the woods in Connecticut.

Saxsquatch calls North Carolina home, but has traveled the country, including stops in Chattanooga, and in fact, his social media page includes a picture of him playing his sax on the Walnut Street Bridge and another of him on one of the train cars at the Choo Choo.

Thanks to John Oates, one half of the music duo Hall & Oates, Saxsquatch is getting lots of media attention these days, after the two collaborated on an EDM remake of Oates’ hit song “Maneater.” The song and video were recorded in Nashville and released on Friday.

In addition to releasing the song, Oates and Saxsquatch co-hosted the virtual Oates Song Fest 7908 on March 20 and the sax-playing legend will attend the Smoky Mountain Bigfoot Festival in Townsend, Tennessee, on May 22.

“I met John through his wife, Aimee, who I met on Instagram. She connected us and we did a few songs together and one was ‘Maneater.’ We were vibing the whole time fusing jazz and blues with some dance music. We did a dance version of ‘Maneater’ so I could tap my big foot.”

Saxsquatch said the song’s title first got his attention, but that “My whole family listened to it growing up. Especially around Valentine’s Day. The girls sort of liked it ironically.

“John told me he originally wrote it about a girl but that it became about New York City.”

Saxsquatch would only agree to an interview on the condition that his real name not be used. He has been featured in Rolling Stone and Forbes magazines and the New York Daily News, and the artist is loving his new-found fame and the publicity. He’s also been performing as much as possible.

“It’s been awesome. I love being on stage, but I don’t like when people get a little too handsy.”

Saxsquatch said he buys all of his equipment at pawn shops and learned to play listening through stereos and televisions the family powered by pirating power from a neighbor’s house.

“We used to run a long cord from the back of people’s house,” he said. “We got Wi-Fi that way, too.”