A horror film inspired by real-life tales of paranormal activity at an Essex rectory is set to be released this week.

Borley Rectory became known as the “the most haunted house in England” after being given the description by psychic researcher Harry Price when he published two books about it in the 1940s.

The original findings were front page news in the Daily Mirror in the 1920s.

He documented a series of alleged hauntings from the time the rectory was built in 1863 and having lived there from May 1937 to May 1938 it was from this experience that he wrote his book.

It is said to primarily be haunted by a nun, whose remains were in the rectory.

It is not clear if he made up some of the things that happened in the Rectory, which is found near Halstead on the Essex/Suffolk border.

Some members of a group of so-called supernatural investigators said they had set him up but nothing was ever proved and Price has remained a controversial figure.

Built in 1862 to house the rector of the parish of Borley and his family, it was badly damaged by fire in 1939 and demolished in 1944.

It gained a reputation for being haunted after a series of residents reported unsettling incidents.

The large Gothic-style rectory had been alleged to be haunted ever since it was built.

These reports multiplied suddenly in 1929, after the Daily Mirror published Price’s account.

The story of the rectory has now been made into film The Banishing and was directed by Christopher Smith.

It stars Jessica Brown Findlay, of Downton Abbey Fame, and Billericay born John Heffernan who has appeared in The Crown and Luther.

The film is now available to stream on all major platforms.

Brown Findlay plays a mother, who risks losing her only child to a pervasive evil that lurks in distorted mirror reflections, which act as portals between the mortal and supernatural realms.

The story follows Heffernan as vicar Linus who accepts a new posting from Bishop Malachi to tend to a wayward flock in 1930s rural England as the Nazis march defiantly into Austria.

Brown Findlay, 31, who rose to fame as Lady Sybil Crawley in the first three series of ITV period drama Downton, says it was a role she found “intriguing”.

She said: “I’m naturally someone who leans away from watching horrors, like strictly speaking horrors but thrillers, [I’m] starting to realise I really enjoy.

“I’d worked with the director before and I was at a point where I just sort of, I guess, wanting to just try new things, sort of just take opportunities that were coming to me rather than overthinking things. Sometimes I can fall short on that. I just thought it’d be really interesting.”

British director Smith – famous for films such as Creep, Severance, Triangle and Black Death – was also drawn to the story, but with the added context of reflecting the era it’s set in.

He said: “What struck me, apart from that I was always interested in the period – the idea of an anxiety of impending doom of [Second World War]– was that I had never made a haunted house movie.

“I didn’t want to explore the Harry Price story, the famous ghost story at the time. I didn’t want this to be a story about just one thing.

“And as soon as I started to move towards my vision of it, I felt less encouraged to do a character that we had seen done a certain way before by other actors.

“So, I said, OK, let’s base it in a true context which is the build-up to [the war]. Let’s push the idea of the gathering storms of war and use the rich characters that were in the original script and channel it in a different way.

“I’m actually much more interested in films like The Shining, which is almost more of a psychological film than it is a haunted house movie, so this film very quickly went down the line of… ghosts being the demons that you bury away in yourself… what’s haunting you.”

The film, which also stars Sean Harris and John Lynch, was shot before the coronavirus pandemic and nearly year-long lockdown faced by most since early 2020. 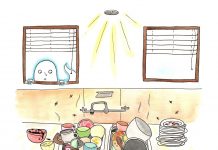