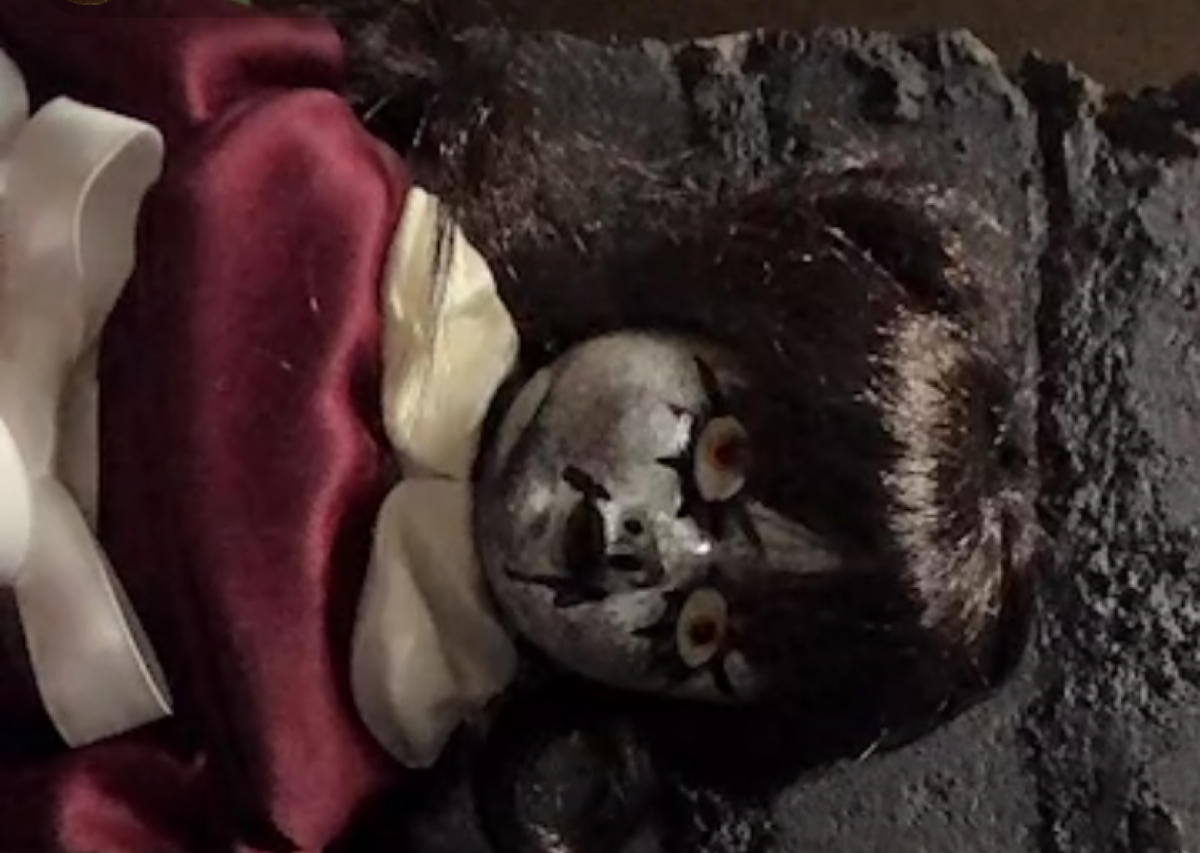 Recently, my sister held out her phone to show me a live video on TikTok. In grainy night vision, two men in creepy masks sit in the corner of the frame. We watch for a bit as they get up and wordlessly walk down a path in the woods. “I keep finding these,” she says. “They’re really creepy.” All over social media, users bemoan accidentally stumbling upon clowns staring into a camera or supposed live exorcisms. “My whole feed is makeup artists so it is terrifying when one of these keep popping up every few minutes,” tweets @magshutchinson_. The accompanying screencap features a man in an unsettling pig mask.

“Haunted TikTok” is nothing new, though the phenomenon seems to have ramped up since the advent of the COVID-19 pandemic. While it “started gaining momentum in 2019,” explains Jess Joho for Mashable, “it’s now bleeding more into the mainstream in 2020, when people’s general anxiety is at an all-time high.” Ranging from true crime stories to alien invasions, Haunted TikTok encompasses various genres and experiences, and the live component adds exciting transience to the experience. It articulates the sense of impending doom associated with the endless scrolling of a social media app. What are we looking for, and what happens when we stumble upon something we don’t want to see?

Disturbing content has long had its hold in internet communities, such as the ever-popular creepypastas. Much of TikTok’s spooky stuff cribs from mainstream horror and ghost-hunting shows. The main difference has to do with the artistic tools these users have at their disposal, a combination of easy-to-edit short-form shooting and the Live feature (available after you amass 1,000 followers). But the most integral aspects of the TikTok brand of horror come from the mechanics of the platform itself, its uncomfortably intuitive algorithm, and the mechanics of the infinite scroll.

While YouTube and Instagram pivoted to catering to large corporations and brands a while ago, TikTok still offers the opportunity to stumble across small, weird accounts. There’s a sense that you might find something “real.” For Live videos, this feeling is especially palpable. Unlike Instagram and YouTube, TikTok does not automatically log and save live videos. In many cases, if you’re not already following an account, you have to rely on the algorithm to feed it to you. Actively searching for haunted Lives can be fruitless. A handful of paranormal accounts regularly go live, doing stuff like trying to communicate with weird dolls, holding séances, or discussing recent “cases” with self-proclaimed paranormal investigators. Eventually, though, you stumble on something different.

In a Live video on @realestatecharli’s account, a horizontally placed camera points toward a storage shed. The user is unseen, and the buzz of traffic can be heard in the background. The commenters address someone named “David,” asking him to make his presence known. Eventually, a cup flies across the room. Charlie claims he’s moving out of his house, that he’s barely slept for the past two years due to the strange phenomena. For his videos, he sets up cameras in different parts of the house, always in search of strange occurrences. Very little happens on these streams; a door slams shut, or a distant voice can be heard. Consciously or not, he’s created a kind of game where viewers are expected to piece together details and incidents toward some end goal. These stories don’t always have a natural progression, and some go on indefinitely. They’re most rewarding for the most devout and obsessive followers. This game assures that people stay logged on.

The central appeal of Haunted TikTok comes from its context, rather than the content itself. Transplant these same videos to YouTube or Twitter, and they’d appear repetitive and derivative. No doubt there are inventive creators using the horror genre creatively. Amidst the teenage trolls trying to scare kids with creepy masks are talented artists toying with storytelling and performance. Still, they are eventually hampered by the app’s limits, as it rewards consistent and endless material over creativity.

Ironically, the most exciting horror on TikTok reflects the user’s own boredom back at them. Like the endless scroll of the For You page, it promises that we will be rewarded if we keep watching. In the moment, this can be cathartic and even exciting. But in the long term, it only means we stay logged on for more time. We will never find what we are looking for. We are increasingly spectral presences chasing after ghosts, real and imagined.

As arts communities around the world experience a time of challenge and change, accessible, independent reporting on these developments is more important than ever.

Please consider supporting our journalism, and help keep our independent reporting free and accessible to all.