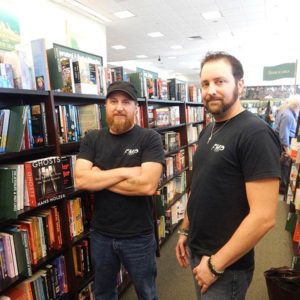 Shrewsbury – This is the perfect time of year to explore ghostly phenomena and Brett Blanchette and Tom Allen, lead investigators with Full Moon Paranormal, have recently launched a new show on Northborough’s Cable Access. Two episodes have already aired, explaining what they do and investigating strange happenings in a home.

Blanchette, from Northborough, and Allen, from Worcester, have been friends for over 20 years. They have always been interested in the paranormal. Blanchette is more interested in ghosts while Allen is interested in other paranormal aspects such as cryptozoology (the study of creatures such as the Loch Ness Monster and Big Foot), philosophy and theology.

“I’m focused more on what’s out there after we die – that’s what I’m into and I leave the rest to [Tom],” noted Blanchette.

They are self-taught in the areas of paranormal exploration but Allen spent time in North Carolina under the tutelage of a Baptist minister. He was considering the ministry at one point.

“We both have experienced so many different things and we can say to people that are skeptical, ‘we’ve seen this and we’ve heard that and we believe that there is something out there,’” said Blanchette.

Blanchette joined a group in about 2009 based in Hudson that investigated paranormal activity. Allen soon joined the group and eventually they went out on their own. They were inspired by television shows such as “Ghosts Adventure” on The Travel Channel.

Blanchette explained that he was driving home from work one day a few months ago when the idea to do a show on Northborough Cable Access hit him, so he immediately drove over to Algonquin Regional High School in Northborough where he met with producer, Dana Volke, who was very excited by the idea of a paranormal-themed show.

They are now working on their next episode where they will go on location to the old cemetery in Northborough. They also have ideas to visit other New England Historic sites to see what paranormal activity can be found.

The pair utilize hi-tech equipment to help in their investigations. In their arsenal is an EMF meter, a scientific instrument for measuring electromagnetic fields. However, they need assistance with funding other equipment for their investigations. They have set up a crowdfunding page for donations through Indiegogo, www.indiegogo.com/projects/ghost-hunters-in-need–2#.

Episodes may be viewed on the Northborough Cable Access You Tube channel: www.youtube.com/channel/UCWOnY_sfze_J5tIE6lkVy7w?view_as=subscriber.