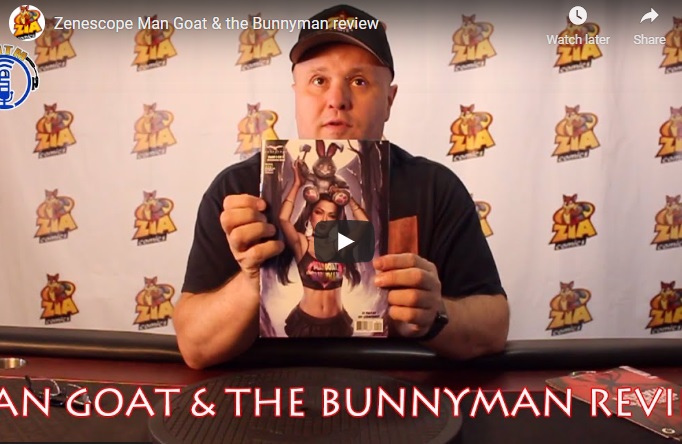 Zenescope is known for their strong female characters. Their covers are typically adorned with very attractive women. Goat Man & the Bunnyman is a bit of a departure from their usual fare.

Goat Man and Bunnyman are cryptids. A cryptid is a creature or plant whose existence has been suggested but has not been discovered or documented by the scientific community. There are a few people in the Ozark area that are not only aware of them, but interact with them. Goat Man and the Bunnyman actually help solve paranormal and normal crime in the area.

They tend to leave a path of carnage in their wake, especially Bunnyman. Watch the video review to see is Goat Man & the Bunnyman make it to my pull list.

Bigfoot, the Jersey Devil, the Loch Ness Monster. All are age old folklore fodder, but could they actually be real? In recent years the myth of Man Goat and The Bunny Man has grown locally, and many have claimed sightings of the two unique creatures; yet no concrete evidence exists… And that’s exactly how they want it!

Dealing with the things nightmares are made of so we don’t have to – deranged mutants, satanic cults, demons, summer vacationers – Man Goat and the Bunny Man protect us from the evils that hide in plain sight. But they don’t want your adoration, they just want to be left alone!

LISTEN TO OUR PODCAST!