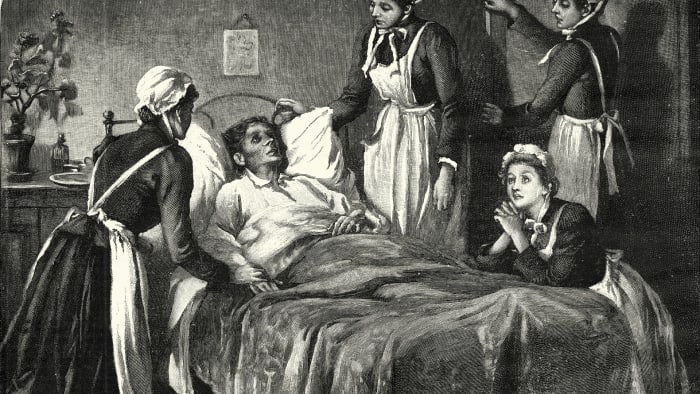 On Halloween, people shed reality for a day and mark the holiday with costumes, decorations and parties. Creepy legends and characters have evolved based on real, terrifying events. And a Halloween tradition of confronting the dead has led to legions of ghost stories—and hoaxes.

Read about Halloween traditions and legends:

A Fear of Vampires Spawned by Consumption

During the 19th century, the spread of tuberculosis, or consumption, claimed the lives of entire families in Rhode Island, Connecticut, Vermont and other parts of New England.

Before physicians were able to explain how infectious diseases were spread, hopeless villagers believed that some of those who perished from consumption preyed upon their living family members. This spurred a grim practice of digging up the dead and burning their internal organs.

Why Witches Fly on Brooms

The evil green-skinned witch flying on her magic broomstick may be a Halloween icon—and a well-worn stereotype. But the actual history behind how witches came to be associated with such an everyday household object is anything but dull.

The earliest known image of witches on brooms dates to 1451, when two illustrations appeared in the French poet Martin Le Franc’s manuscript Le Champion des Dames (The Defender of Ladies).

Read more about the legend behind witches flying on brooms here.

Why Haunted Houses Opened During the Great Depression

In the period leading up to the Great Depression, Halloween had become a time when young men could blow off steam—and cause mischief. Sometimes they went too far. In 1933, parents were outraged when hundreds of teenage boys flipped over cars, sawed off telephone poles and engaged in other acts of vandalism across the country. People began to refer to that year’s holiday as “Black Halloween,” similarly to the way they referred to the stock market crash four years earlier as “Black Tuesday.”

Jack-o-Lanterns and the Legend of ‘Stingy Jack’

An Irish myth about a man nicknamed “Stingy Jack” is believed to have led to the tradition of carving scary faces into gourds. According to the legend, Jack tricks the Devil into paying for his drink and then traps him in the form of a coin. The Devil eventually takes revenge and Stingy Jack ends up roaming Earth for eternity without a place in heaven or hell. Jack does, however, have a lighted coal, which he places inside a carved turnip, creating the original Jack-o-lantern.

Read more about the origins of Jack-o-lanterns here.

For years, presidents, first ladies, guests, and members of the White House staff have claimed to have either seen Abraham Lincoln or felt his presence. Grace Coolidge, wife of Calvin Coolidge, the 30th president, was the first person to report having seen the ghost of Abraham Lincoln. She said he stood at a window of the Oval Office, hands clasped behind his back, gazing out over the Potomac, perhaps still seeing the bloody battlefields beyond.

In the post-Civil War era, when many Americans were reeling from loss, a photographer named William Mumler claimed to capture ghosts on film. While taking self-portraits for practice, one of Mumler’s prints came back with an unexplainable aberration. Although he was “quite alone in the room” when the shot was taken, there appeared to be a figure at his side, a girl who was “made of light.”

Mumler showed the photo to a spiritualist friend who told him the girl in the image was almost certainly a ghost. Mumler then began a swift business in so-called spirit photography.

Washington Irving’s 1820 tale of a headless horseman who terrorizes the real-life village of Sleepy Hollow is considered one of America’s first ghost stories—and one of its scariest. Irving may have drawn inspiration for his story while a teenager in Tarrytown, New York. He moved to the area in 1798 to flee a yellow fever outbreak in New York City.

Irving’s story takes place in the New York village of Sleepy Hollow. A lanky newcomer and schoolmaster, Ichabod Crane, is chased by a headless horseman. In the tale, Irving weaves together actual locations and family names, and a little bit of Revolutionary War history with pure imagination and fantasy.

Read more about the origins of the famous Halloween story here.

On November 13, 1974, 23-year-old Ronald “Butch” DeFeo Jr. murdered his entire family in their sleep. One year later, the Lutz family purchased the house in Amityville, New York where the horror took place. George and Kathy Lutz then claimed they experienced shocking paranormal phenomena in the house: green slime oozing from the walls, a creature with red eyes and multiple family members levitating in their beds.

Frankenstein author, Mary Shelley, is world renowned for her terrifying fiction, but few know that she had a dark secret of her own. Shelley’s husband, Percy, drowned at the young age of 29 when his boat was caught in a storm in July 1822.

Percy’s body and those of his fellow sailors were found 10 days later. Percy Shelley and the others were cremated, but Shelley’s heart did not burn (perhaps due to a bout of tuberculosis earlier in this life). Mary Shelley eventually took ownership of her late husband’s heart and is said to have carried it around in a silk bag. Watch a video here.

Find out more about Halloween.