[This story contains spoilers for The Haunting of Bly Manor]

Mike Flanagan is haunting us. Don’t worry, the filmmaker is thankfully very much still among the world of the living. But he is haunting us through his cinematic storytelling. Over the past decade, Flanagan has displayed an intrinsic understanding of the link between horror and spirituality, the thrill, the beauty, and the romance, all of which speak to humankind’s ability to believe, to find equal parts comfort and anxiety in the very thing Dan Torrance (Ewan McGregor) says at the end of the director’s Doctor Sleep (2019): “We go on.”

It’s not merely the concepts of Flanagan’s works that are fascinating, or that set him apart from contemporaries also swept up in all things paranormal, after all ghosts and theories of life after death are our most foundational elements of horror. But it’s the way in which Flanagan commits to these elements operating across time and space that make his works feel transcendent within the genre space.

Time and space. Yes, it’s a combination of words typically associated with science fiction, but without attempting (and failing) to pursue the Kip Thorne of it all, there is a thread of an idea there worth following from one genre to the other, from black holes to dark hallways. Flanagan’s paranormal-centric works operate on the notion that what haunts his characters has always haunted them. Whether realized or not, their ghosts are as ingrained within them as their DNA. It’s a personal and physical manifestation of their own life struggles, which may vary in severity, but are something no one can avoid. We all have struggles and thus we all have ghosts. These characters’ arrival in a haunted space awakens what was already there and gives shape to the shapeless, a dark star being born out of life’s unwanted dust and fragments. 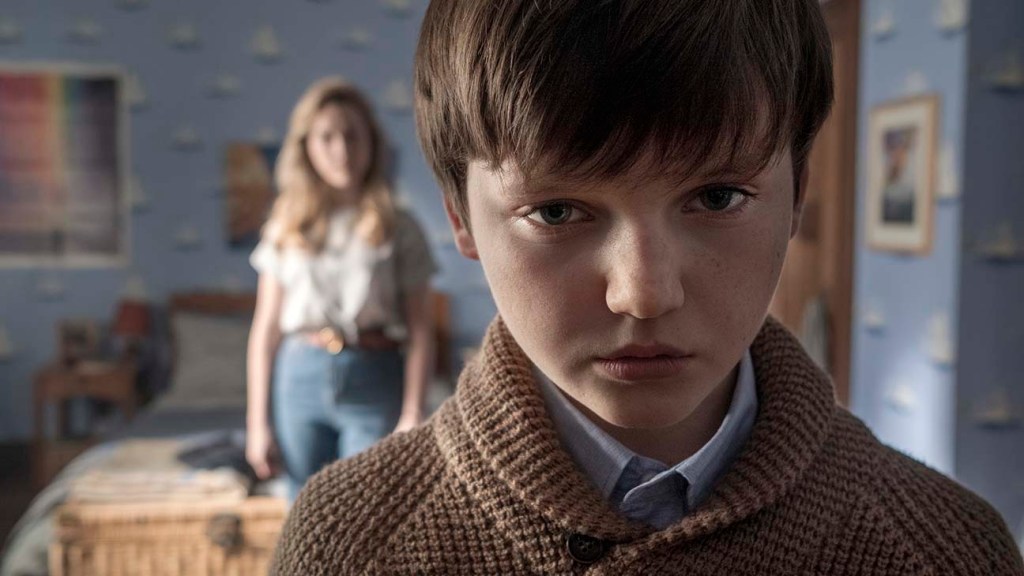 Flanagan’s hauntings don’t feel like mere happenstance, but a peek at the organized and deliberate workings of the universe. It’s time, space, and the existential underpinnings of the universe that Flanagan reckons with in Absentia (2011), Oculus (2013), Before I Wake (2016), Ouija: Origin of Evil (2016), The Haunting of Hill House (2018), Doctor Sleep, and his most recent project which forms the basis of this consideration of his filmography.

Last week, Flangan’s latest project, The Haunting of Bly Manor was released on Netflix. Unlike the aforementioned works, Bly Manor doesn’t solely feature Flanagan as a director. It’s a collaborative effort that includes Ciaran Foy, Liam Gavin, Ben Howling, Yolanda Ramke, Axelle Carolyn, and E.L. Katz. Yet, it still feels steered by Flanagan and of a piece with his filmography, continuing to shed light on much of what haunted the halls and echoed though the history of his previous films. If The Haunting of Hill House was about who you live with, the ghosts in your head and the ghosts in your house, and ultimately reminding you to live, and live not alone, then The Haunting of Bly Manor is about memento mori, the ever-present ghost of yourself, remembering to die, and that life is not a possession but a journey that leads into the next. 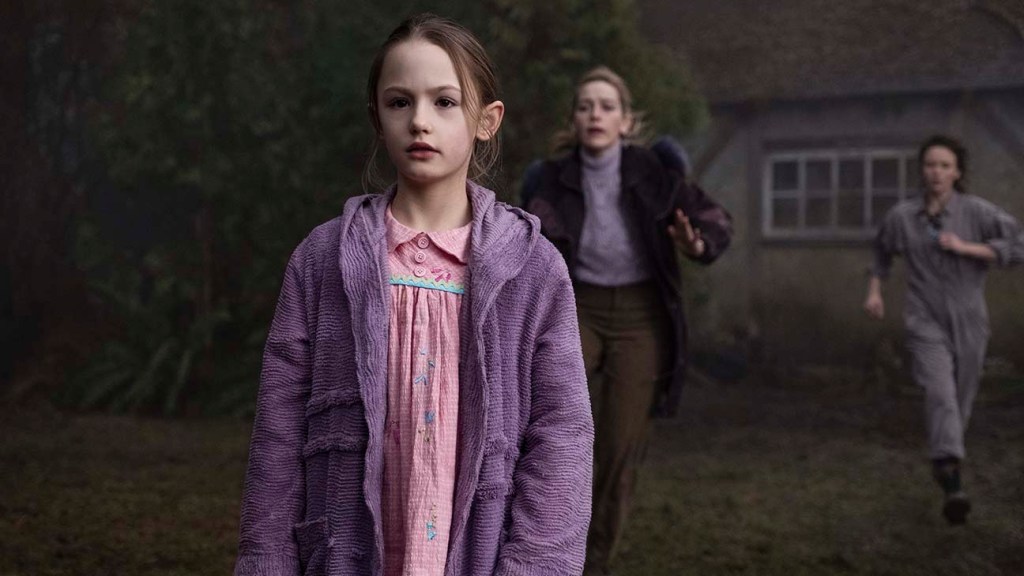 Based primarily on Henry James’ novella, The Turn of the Screw, and several other of James’ ghost stories, Bly Manor follows a governess, Dani (Victoria Pedretti) who arrives to a storied estate to watch over two children, Flora (Amelie Bea Smith) and Miles (Benjamin Evan Ainsworth), odd and driven by stories of their own. Dani’s care of the children, draws her into a larger mystery surrounding the death of her successor Rebecca Jessel (Tahirah Sharif) and her passionate love affair with the charming and dangerous Peter Quint (Oliver Jackson-Cohen). What begins as a modernization of Jack Clayton’s The Innocents (1961), also adapted from James’ novella, becomes something else entirely. It is a love story, a gothic romance taken out of the cobwebs of the past and into the ’80s in order to be told with an eye pointed towards the queer, and inter-racial truths of modern(ish) love, without sacrificing any of the emotional complexities or moral quagmires of 19th-century storytelling. The Haunting of Bly Manor isn’t an exploration of what happens after we die, but what happens when we love, and we love so strongly that we are unable to leave, even if that means corrupting the innocence of the emotion.

The miniseries’ mantra, “dead doesn’t mean gone,” is in some ways a perversion of Doctor Sleep’s own mantra, “we go on.” What ties Dani, Miles, Flora, Peter, and Rebecca together, alongside the equally important stories of Hannah (T’Nia Miller), Owen (Rahul Kohli), Jamie (Amelia Eve), and Henry (Henry Thomas), is a refusal to move on, and the inability for death to dissipate strongly held feelings. Even before considering the supernatural elements, these characters are trapped within the space of Bly Manor because of death, both literal and figurative. The death of a fiancé, the death of parents, the death of a marriage, the death of a mother, the death of a family, the death of a lover, and the death of a romance, all of these little deaths culminating in a death of self, again, both literal and figurative. The structure of the episodes, and the concept of being “tucked away,” when the living consciousness is pushed into a memory while the consciousness of the dead take over the body, play with time in such a way that mourning never ends. By looking at these characters in terms of their past and present simultaneously, Flanagan and the filmmakers of Bly, expose the raw and unhealed wounds that exist within each of these individuals, slowly killing them, but killing all the same.

While it would perhaps make sense to say that Bly Manor becomes a place of death for its occupants, it’s more accurate to acknowledge that Bly Manor was always a place of death. Bly Manor was always drawing these characters towards it, even before they experienced their first taste of tragedy. Their mortal wounds were written upon their souls even before they were born because time is no match for death. Bly Manor is a gravity well that devours time. The eighth episode, directed by Axelle Carolyn, is one of the most fascinating of the series. It gives a history and a face, albeit fleeting, to this field of gravity. Based off of James’ “The Romance of Certain Old Clothes,” and taking its title from that story as well, the episode tells a centuries-old tale of a strong-willed woman, Viola (Kate Siegel), whose defiance against death, her insistence to not go on, is so strong that even when her body dies she remains on the grounds of Bly, and entraps all who die on the grounds there along with her.

Viola’s hurt, rage, and loneliness are so powerful that even when her memory of who she is fades, along with her face, that her emotions still drive her, creating a habit, a well-worn path, that could only be stopped by the requited love of a daughter long dead and gone on. Unlike Doctor Sleep’s Rose the Hat (Rebecca Ferguson), it’s a love of someone else rather than a love of self that makes the idea of going on so frightening. The key to the eighth episode and Viola’s plight is that it doesn’t stand-alone, despite it introducing new characters and being presented in black and white. Rather it is the reason behind every strange occurrence at Bly Manor, and the episode’s position near the end of the season only serves to showcase how unavoidable the fates of these characters always were because they had been in motion for centuries.

Despite the heaviness of all these themes working in tandem, Flanagan and his team manage to tie them up with a sense of hope rather than despair. That’s not to say there isn’t sadness to be found in The Haunting of Bly Manor’s conclusion. The romances of Dani and Jamie, Owen and Hannah, and Peter and Rebecca are all concluded by the death of one partner, as many romances ultimately are. That is a frightening inevitability along the same line as these characters always destined to arrive at Bly. But, as exemplified by Henry finding a new and different love within the lives of Miles and Flora, love doesn’t dissipate, it doesn’t die, or disappear, it’s only changed and transferred. “Dead doesn’t mean gone” doesn’t have to be perverted in the way that Viola, and later Peter Quint twisted it. People die, and go on, but their love remains, and should they be so lucky, serves as an eternal reminder to others of love’s worth and inability to be erased. To live fully, and to die fully, Flanagan suggests, is to leave behind a ghost of love, a ghost that doesn’t seek to possess, or hold people down like gravity, but to move, unbound by time or space.