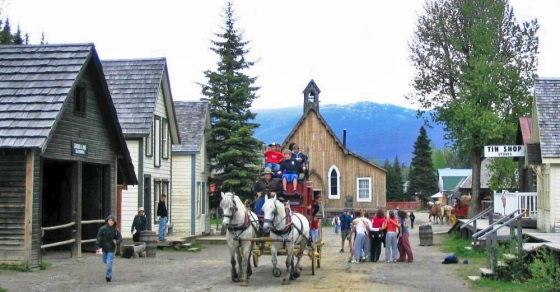 Barkerville, in the Cariboo, is where illusion and reality merge.

Let me tell you a story. Maybe it’s true, maybe not. Still, it sends a funny little shiver up my spine.

In May of 1866, Charles Blessing and a companion, Wellington Delaney Moses, were on their way to Barkerville when they met up with a chap named James Barry.

Barry persuaded Blessing to join him on a side trip, while Moses continued on to Barkerville, where he opened a barbershop.

Several weeks later, Barry showed up in Barkerville alone, claiming to have no knowledge of what happened to Blessing.

Moses distrusted Barry’s evasive manner and his misgivings grew stronger when — as the tale goes — shortly after Barry’s arrival, Blessing walked into the barbershop one morning indicating that he needed a shave.

Moses was relieved to see him, but was nonetheless shocked at Blessing’s appearance. His clothes were torn and filthy and his eyes were hollow.

The barber sharpened his razor blade, but when he turned around, he was aghast to find the moist towel he had used to covered his friend’s face was soaked in blood. He let out a cry of alarm and the apparition vanished.

This all but convinced Moses that Blessing had been murdered and his suspicions were confirmed when a hurdy-gurdy dancer showed him a distinctive gold tie-pin in the shape of a skull given to her by Barry.

Moses, horrified, instantly recognized it as belonging to his friend. In the meantime, Blessing’s corpse with a bullet hole through its skull had been discovered in the bush.

Witnesses testified to the fact Barry was armed with a pistol, but the definitive piece of evidence was Blessing’s gold tie-pin.

With the hindsight of time, I know the outcome of the Barry case. To quote the formidable Judge Begbie, who pronounced sentence on Barry: “You have dyed your hands in blood and must suffer the same fate … that you be taken to the place of execution, there to be hanged by the neck until you are dead and may the Lord have mercy on your soul.”

I am not sure whether Blessing’s ghost still stalks the streets of Barkerville, but the town near Quesnel plays host to several other spectral inhabitants.

Although no one has been able to identify him, a man in a top hat and tails has been known to materialize briefly, on stage left at the Theatre Royal.

A shadowy woman at an upstairs window of the old Barkerville Hotel has been sighted on several occasions, even though the building is empty and locked up.

The St. George Hotel, too, has a mysterious phantom, a young blonde woman dressed in white, who appears around midnight by the bedside of lone male visitors.

(Women guests, it would seem, aren’t worth her wile.)

Some of Barkerville’s ghosts are prankish poltergeists, others are solitary and wistful. None of them appear to be evil or violent. Perhaps this is because Barkerville’s past contains few heinous criminals.

Other than Barry’s hanging, the only other execution that took place there was that of a First Nations man found guilty of murdering a man at Soda Creek.

The town, then known as Williams Creek, had none of the lawlessness of other American gold rush frontier towns.

A few saloons featured German or Dutch hurdy-gurdy dancers and today, as I drop by the reputedly haunted Theatre Royal, a line of amply endowed hurdy-gurdy girls in red dresses regale the audience with their anecdotal tales and double-entendres.

I peer nervously at the wings of the stage — does a shadow lurk there perhaps? Unlikely.

The audience’s rowdy applause and whistles is enough to discourage any self-respecting spook.

Barkerville’s most famous character is its namesake, Billy Barker. Apocryphal tales about Barker abound, but a favourite among them is that he was haunted by a recurring dream in which the number 52 seemed to carry a mysterious significance.

Bearing out the tale is a laconic marker along Barkerville’s main street recording the spot where, according to legend, Barker on Aug. 17, 1862, hit paydirt at a depth of 52 feet.

Barker found gold worth a half-million dollars in today’s currency, but squandered it all, dying penniless at the age of 77.

He is reputedly buried in a pauper’s grave in Victoria’s Ross Bay Cemetery.

Yet I wonder, is he?

Or does his shadow prowl the streets of Barkerville on dark and stormy nights?

Who knows? Who dares find out?