Home Paranormal News Is this a ghost captured on camera in Huntingdon? | Hunts Post... 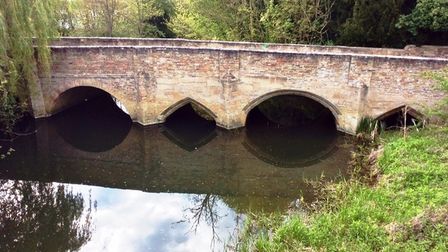 One of the oldest and best known ghost stories in Huntingdonshire is the tale of Nun’s Bridge, which is covered in Mark Egerton’s book The Haunted History of Huntingdonshire.

It is not clear, says Mark, whether the ancient arched bridge, close to Hinchingbrooke House was originally named because of the Benedictine nunnery nearby or because of the nun who is said to haunt the site after losing her life there.

“The bridge was once part of the main traffic route between the Huntingdon and the A1, but as modern traffic increased and vehicles got larger and heavier, the bridge was deemed unfit for purpose. This may explain why sightings have dried up. Today, the bridge is only used as footpath by cyclists and walkers, and is almost impossible to see by passing motorists.”

Nun’s Bridge at Huntingdon where several people have reported sightings of a nun. – Credit: MARK EGERTON

The nun is generally witnessed alone, but she has been seen with a man, and even nurse (possibly a Prioress) and there seem to be four theories.

1: There is no nun, this is simply the ‘white lady’ ghost that has often been seen at Hinchingbrooke House.

2: The nun has a secret tryst with a monk and they used to meet secretly on the bridge. The nun became pregnant and when her relationship was discovered by the Prioress, she and the monk were executed and buried in secret.

3: The nun did have a relationship and found herself pregnant, and knowing it would bring shame to the church and her family, she took her own life.

4: She was drowned by her brother in the brook after her family found out she was pregnant.

“While researching Nun’s Bridge, I met up with David Hufford who is a local historian and Huntingdon tour guide.  David recalled how the bridge once had a sinister reputation as an accident blackspot and there were several fatalities at the site.

“This was due to the steep slope on the Huntingdon side of the bridge as vehicles found it difficult to negotiate the narrow bridge. The bridge’s poor safety record eventually resulted in the creation of a by-pass.

“David also remembered an old tramp who lived in a tent in the wood alongside the bridge during the 1950s. He was once asked if he had seen the ghost and he replied ‘ Indeed I have, on very many occasions. She doesn’t bother me so I don’t bother her’.

“David also told the story of his friend Ray Hall who had a terrifying experience on the bridge during the 1960s. Ray and a friend had been at a dance in Huntingdon and they met up with two Women’s Auxiliary Air Force members from RAF Brampton.

“The men agreed to escort the WAAF’s home and their route took them across Nun’s bridge. They returned home and came back across the bridge. Ray’s friend suddenly bolted up the steep slope and  Ray, bewildered by his friend’s behaviour, looked across the water and witnessed what he described as a ‘cone of shinning light’. Ray said he was struck with terror and ‘ran for it too’.”

Mark says he carried out a vigil at the site in May 2015.

“Whether the nun is just legend or a genuine haunting is very hard to say, but there have been many reported sightings over a long period of time. I could not resist checking out the bridge myself, and on May, 30, 2015, I stopped at the bridge at 2.30am.

“The bridge is very well lit at night and I stood close to the spot where most of the sightings have been reported. There were plenty of sounds, strange noises and movements, but I was outdoors, near running water. It was very difficult to conduct a controlled investigation and it is possible over a longer period of time we could have uncovered something, but on this particular occasion there was nothing to report.”

Mark’s book, The Haunted History of Huntingdonshire, is available at the St Neots Museum and Niche Comics and Books in Huntingdon.