Home Paranormal News Drake’s Island and the tale of The White Lady: Spirits caught on... 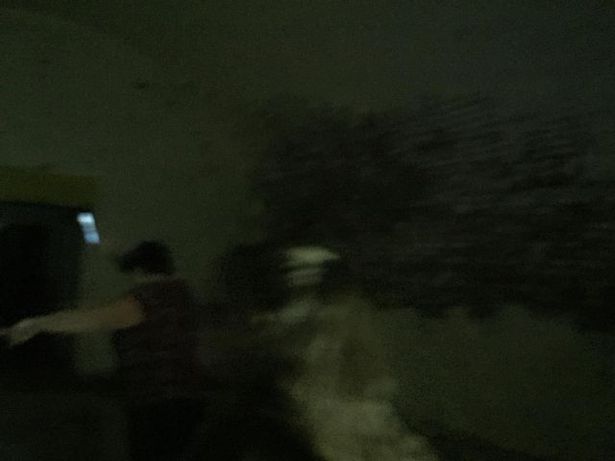 For the first time in 30 years the illusive isle that is Drake’s Island is open to the public, but has it ever really been deserted?

Last week PlymouthLive shared with readers 13 eerie experiences that have happened in the city – but we failed to include arguably one of the most haunted spots in Plymouth.

Cathie Gillespie, steward of Drake’s Island, has shared some chilling photos which have captured some of the spirits of the island on camera.

But she says the spirits aren’t like something from the Exorcist, they just like to play games.

“People think of hauntings or activity as being something out of Hollywood, where you have things being thrown across rooms or heads turning 360 and people throwing up,” she said. “The spirits we have on the island are all naughty and mischievous, and like to play games, but they’re not nasty.

“They do get on your nerves! You walk around thinking, ‘For God’s sake!’

“Everyone thinks I’m barmy but I walk around the island saying ‘Good morning’. If you don’t do that you know you’re in for a bad day! There are lots of people who have worked with us, be it caterers or those who want to visit the island or paranormal investigations or security guards who will all turn round and say something has happened to me.”

The steward also believes there are possibly 15 spirits on the island, and compared it to the BBC sitcom Ghosts.

“That’s what the island is like, we don’t call them ghosts we call them spirits or energies,” she said. “They all make their presence known in different ways so we have whistling, coughing, footsteps.”

But it’s not just weird sounds and uneasy feelings, there is also photographic evidence of spirits haunting the iconic isle.

The photos (see below) have been taken by those who work at the island, as well as those who have visited, and will send a chill up your spine.

Cathie explains the context behind one of the pictures, which shows a woman and behind her, what seems to be a ghostly figure all dressed in white.

She is known as the White Lady, and paranormal investigations are currently taking place to determine who exactly she is.

Cathie said: “The darker picture, where you can see a white figure behind a lady, the human there is one of our employees Jan. She was on the island doing an operational visit and was in a part of the island she is incredibly used to going into.

“Whilst she was in there she turned around and said she wasn’t feeling happy about it, she wanted to get out. She’s holding a phone in her hand so she was using the light to find her way out, and Derek, who is the captain of the ferry who brings our visitors over, thought it was absolutely hilarious.

“He took a photograph and that’s what came out behind her. She says she could feel something, it felt like something was touching her, that’s why she wanted to get out.”

And there have been some other spooky and unexplained happenings which staff members and visitors have experienced.

The steward explained that sometimes the spirits can get a bit, err, handsy.

Cathie said: “The security guards always say it’s hocus-pocus, or it’s rubbish, but they’ve all had something happen to them.

“This ranges from batteries shooting out the front of torches to one of our security guards, who’s a big bloke, feeling a hand tying the tie on his shirt. However his tie was a clip on, so there was nothing to tighten.

“We’ve got nothing nasty on the island. The only thing I feel threatened by is getting my bum pinched! We’ve had people on our ghost tours who’ve had their bra straps pinged.

“We’ve had one young girl who, as she was walking round, something was pinching the back of her thigh and her bum.”

The energies also like to play practical jokes, and have a sense of humour about haunting the undead, Cathie explained.

“We had a gentleman who is a ghost hunter and he was over with a group of paranormal investigators and the island’s owner Morgan Phillips with us,” she said. “We all dissolved into hysterics because the investigator’s trousers started to come down. He was stood still with his monitor and something was tugging at his trousers!

“We also have neck nuzzles. It’s gotten to the stage now when I’m used to it, none of them are scary. It’s not spirits that are trapped; we’ve had mediums that have offered them the chance to move on and move over.

“No one likes a spirit being trapped in a place, so those that want to leave have left, and those that didn’t have stayed. We’ve had a young girl about 11 or 12 visiting with her parents and she got very upset.

“When she was asked why she said something had just said to her, ‘I can see you, can you see me?’ They communicate in lots of ways. We’ve got certain spirits in the tunnels, and you get a sound very similar to scaffolding collapsing.

“We have no scaffolding in the tunnels.”

“We had a tour one night last summer and Derek the captain of our boat gave us a half an hour warning that the tide was turning, and he asked me what I was doing by the Governor’s house singing. Myself and the ranger looked at him and said we weren’t. He said there was definitely singing coming from that building.

“The Governor’s house is boarded up at the moment because it’s too dangerous for anyone to go into. Quite often you’ll hear knocking and, ‘hello I’m here! Hello!’

“Behind the Garrison block we get a very strong smell of freesias – we’ve been told there’s a female spirit behind there who’s quite happy. We also get a very strong waft of roses even though we don’t have any on the island. Lots and lots of things happen.”

If you want to entice a friendly presence, you might want to drown yourself in perfume, as Cathie, who is known as the ghost finder ‘General’ to her colleagues, says that they love the smell.

“Our male spirits absolutely adore it. We always say to people if you’re wearing strong perfume, there’s a very good chance you’re going to get your neck sniffed.

“We do have ladies who say something touched their neck.

“We say not to panic, they’re not going to hurt you or possess you, you’re not going to end up walking off a bridge, the island has been so quiet for so long that now it’s coming back to life the spirits have energy they’re feeding off.”

The island is welcoming paranormal investigators to come and meet their mischievous spirits.

“We’ve used a plethora of mediums,” said Cathie. “We’re preparing now to allow paranormal groups to come in and do their own investigations. So if there are any paranormal groups out there, they can get in touch with me.”

So if you fancy getting your bum pinched by a ghost, or just soaking in some of the history, click here to book.