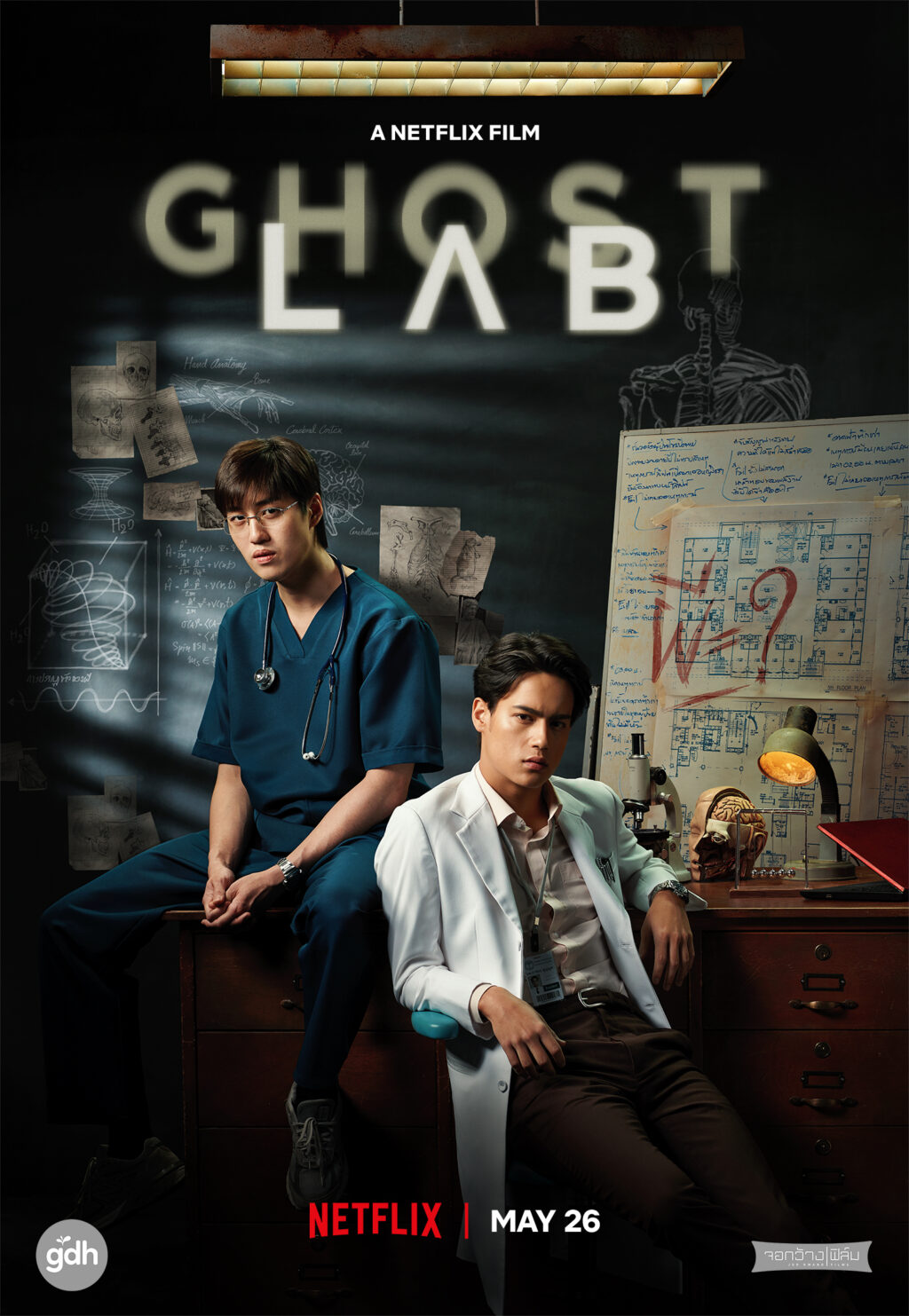 Synopsis: After witnessing a haunting in their hospital, two doctors become dangerously obsessed with obtaining scientific proof that ghosts exist.

The thrust of Netflix’s newest original Thai horror movie involves ghosts that simply do not want to be seen. The spirits of Paween Purijitpanya’s Ghost Lab are obstinate, hazy, unclear, and wildly, distressingly discordant. It’s fitting, then, that the spirit of Ghost Lab itself is so beholden to the arbitrary, pseudo-scientific constraints of its titular entities. With three credited writers, Ghost Lab is a trilogy unto itself, a haunted hospital where, one imagines, no ghosts were turned away.

Thanapob Leeratanakachorn stars as Wee, a dour shell of a man driven to medicine on account of his mother’s nebulously defined chronic illness. He works alongside the sprightly Gla (Paris Intarakomalyasut), another doctor rendered in similar uncertainty– Gla is preeminently obsessed with the existence of ghosts because… he thinks he may have seen one once? The two of them, ostensibly the only two doctors in a hospital that apparently only treats Wee’s mother, play Ghost Hunters: Thailand Edition, skulking about the dark, narrow corridors of Ratanarj hospital, scouring its halls and empty rooms for ghosts.

The first third of the movie is a slapdash, Flatliners retread, minus all the nuance and Hollywood star power but with considerably more ghostly shenanigans. The ghosts they encounter are loud, crispy, and evinced in music-video style quick cuts and lustrous lighting. Conjuring-lite scares merge with a heaping pile of sitcom humor, and in the early goings, the two-hour runtime feels more like a threat, less like a promise.

Though bafflingly arbitrary, the ghosts soon stop appearing. Though they remain a constant presence, Wee and Gla are suddenly incapable of seeing them. After weeks of failed developments on their Northern Lights Project– the name given to their ghost-hunting experiment they intend to submit to world-renowned journal (I kid you not), “The Experiment”)– the Warren-wannabes nearly give up. Audiences, too, might feel the same way.

A strange thing then occurs, and the heart of Ghost Lab becomes clear. The ghosts might be invisible, but the movie’s promise is suddenly seen. In their efforts to attract a stronger paranormal presence, Wee and Gla stumble (spiral) into a rabbit-hole of bad, hasty decisions, the consequences of which imbue Ghost Lab with some much-needed vitality. A movie about the dead suddenly becomes intoxicatingly, richly alive.

Though never scary, the enduring humanity of Ghost Lab is irresistible. Unsteady performances come into focus and genuine pathos (yes, Ghost Lab is at times a bonafide tearjerker) prove affecting. The fun of the latter half remains overbaked and inconsistent– one too many prognoses– but those elements are in service to a much clearer vision.

The violence swells– the music inexplicably does the same despite starting at already-decibel-shattering levels– and the sumptuous genre buffet is readily open for business.

Ghostly assaults are given new life– Ghost Lab has some of the most sensational paranormal choreography I’ve seen in quite some time– and the ticking-clock narrative is sufficiently tense. The twists hit hard and fast, and though little, if not all, of it would collapse under closer scrutiny, it’s engaging, Hart to Hart style thrills with a dollop of ghosts on top.

Much like the beginning, however Ghost Lab trips over it ending. Though sufficiently dark, the ghosts of real life violence haunt the material, and the threats of menace feel too heavy for a movie of Ghost Lab’s stature to handle with an appropriate degree of tact. The pathos wave breakers, too, finally crumble, inundating the last ten minutes with such cloying sentimentalism, audiences might find themselves looking for the spirit of Joel Osteen hidden somewhere in the frame.

Netflix’s international genre offerings have been a mixed bag, though the likes of Red Dot, Don’t Listen, and perhaps the superlative The Call, make the hunt for something good all the more worthwhile. Ghost Lab sits comfortably in the middle of the pack. With a shorter runtime and a tighter frame of focus, it could have been something truly sensational, a deeply felt story not just about ghosts, but of them. The ghosts of grief and family. Of longing and success. Ghost Lab is halfway there, the vague visage of a ghost that’s almost there.

Ghost Lab could have used a little more scientific discipline when crafting its scares, but its heart is big and bold enough to overcome some paranormal dissonance.