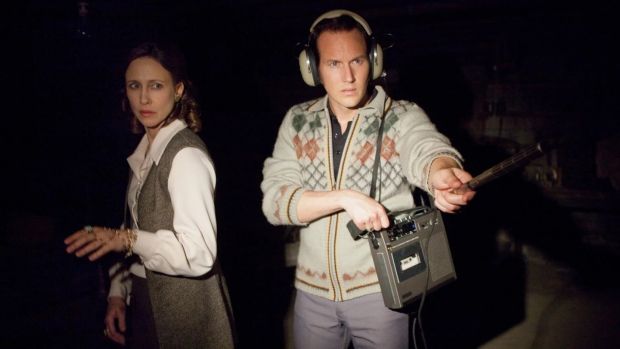 In the summer of 1980, a young couple named Debbie Glatzel and Arne Cheyenne Johnson moved into a rental property in Connecticut. Located close to Debbie’s dog grooming business, with space for her extended family, plus a private apartment for herself and Arne, the new house seemed ideal.

Or at least it did until Debbie’s younger brother David, then aged 11, began to see a charred, blackened old man. Strange occurrences piled up and served to torment the boy. Unexplained noises emanated from the attic. David’s night terrors left him with scratches and bruising.

Within weeks, he began growling and, more concerningly, muttering passages from the Bible and Paradise Lost. A priest was called to bless the premises. When David’s behaviour worsened the family drafted in America’s most famous demonologists, Ed and Lorraine Warren.

During a prolonged series of exorcisms, Johnson reportedly taunted the demon that had taken possession of David, shouting “Take me on, leave my little buddy alone!” Within hours, Johnson lost control behind the wheel of his car “to something” and crashed into a tree. Within months he murdered his landlord in a frenzied attack. During the sensational 1981 trial, he claimed that: “The devil made me do it.”

Surely this legal defence has tested the faith of Patrick Wilson and Vera Farmiga. It certainly proved a cornerstone for many notable Warren-debunkers, including neurologist Steven Novella and prominent sceptic Benjamin Radford. Wilson and Farmiga have, once again, returned to essay Ed and Lorraine Warren in The Conjuring 3, or The Conjuring: The Devil Made Me Do It, as it is called on this side of the Atlantic.

“I plead the fifth,” says Farmiga. “If you literally bring me before a grand jury and make me swear on the Bible, that’s still my answer. I don’t want to influence the viewers’ opinions”.

“We get asked about our personal opinions on each of these stories,” adds Wilson. “And not to be dismissive of that, but it’s not important what I know. We each lean into the part of the script that fascinates us. And, as an American, I am fascinated that you swear on the Bible in court in a country where church and state are supposed to be separate. Obviously, you want to tread lightly and be respectful because lives were lost here, but it gives me some satisfaction that we have a man who served the time that he was given and, from all accounts, has lived an exemplary crime-free life since. So that makes me believe in it, or at least in humanity and, in the justice system. Put it that way.”

You can’t blame them for being protective. Most franchises arrive with an IP attached. That’s why Disney paid $4 billion for Marvel and another $4 billion for Star Wars, price tags that increasingly look like the bargain deals of the century. Other franchises, such as Fast & Furious, Pirates of the Caribbean – spring from high-octane summer hits.

Nobody, however, saw the Conjurverse coming. Tapping into the 1970s spirit of The Exorcist, the supernatural thriller The Conjuring, directed by Saw and Insidious co-creator James Wan, made more than $300 million back on a $20 million budget in 2013. Since then, The Conjuring has expanded into a billion-dollar sequence. The soon-to-be trilogy has spawned additional spin-offs including The Nun, the Annabelle films, and The Curse of La Llorona.

Each film is crafted around a spooky artefact from Ed and Lorraine Warren’s museum of possessed objects. Later this year, a new series of comic books will expand these cursed items for DC with cover art by Bill Sienkiewicz.

“We did not see it coming,” says Farmiga. “We did not see the demand or the box office income. I did think: Oh, you know, this is an opportunity. There are so many different cases that this could go on. But I just wanted to have fun and do my best work, and maybe learn something from it. So the film already brought me joy. To get a whole franchise out of it was a lot of icing on the cake.”

Paranormal investigators Ed and Lorraine Warren were devout Catholics who founded the New England Society for Psychic Research in 1952, seven years into their marriage. While they earned a living from college lecturers and TV appearances, they never changed for their investigations.

I’m such a party pooper. You know, Annabel is a doll made in the prop shop. And there are several of them

Long before The Conjuring, the couple’s supernatural cases had inspired the 1977 book and 1979 movie The Amityville Horror, the 1991 film The Haunted, and the 2009 film The Haunting in Connecticut. There are, additionally, dozens of documentaries and TV specials – Devil’s Road: The True Story of Ed and Lorraine Warren, The Fear Is Real: Reinvestigating the Haunting (in Connecticut), Portal to the Unknown – featuring demonology’s best-known power couple.

Ed died in 2006 but Lorraine served as an advisor on all The Conjuring films until her death in 2019.

“I miss her,” says Farmiga. “I loved spending time with her, just having her around. She always showed by example, that God is love. She had such sweetness and tenderness about her. And she maintained such a sense of wonder throughout all of the darkness that she could see. She just was this beautiful contradiction.”   Farmiga is something of a genre veteran after being terrorised in 2009’s Orphan and three seasons of Bates Motel. The Conjuring movies, however, still scare her, whether it’s a ghost, demon, or Annabelle the terrifying doll.

“I’ve had to learn how to create barriers psychically and emotionally,” she says. “It has gotten easier; it gets easier each time I do one of these movies. I’ve seen The Conjuring 3 now several times and I jumped every time. Every time I know what’s coming, I know all the plot points, but still I jump. There are several moments that, no matter how many times I watched them, get me.”

Patrick Wilson insists he’s much harder to startle: “I go completely the other way,” he says. “I’m such a party pooper. You know, Annabel is a doll made in the prop shop. And there are several of them. I mean, it’s fun to believe, I guess. But I like to be on the other side of it. It’s my job to scare you.”

The Conjuring: The Devil Made Me Do It opens on June 3rd