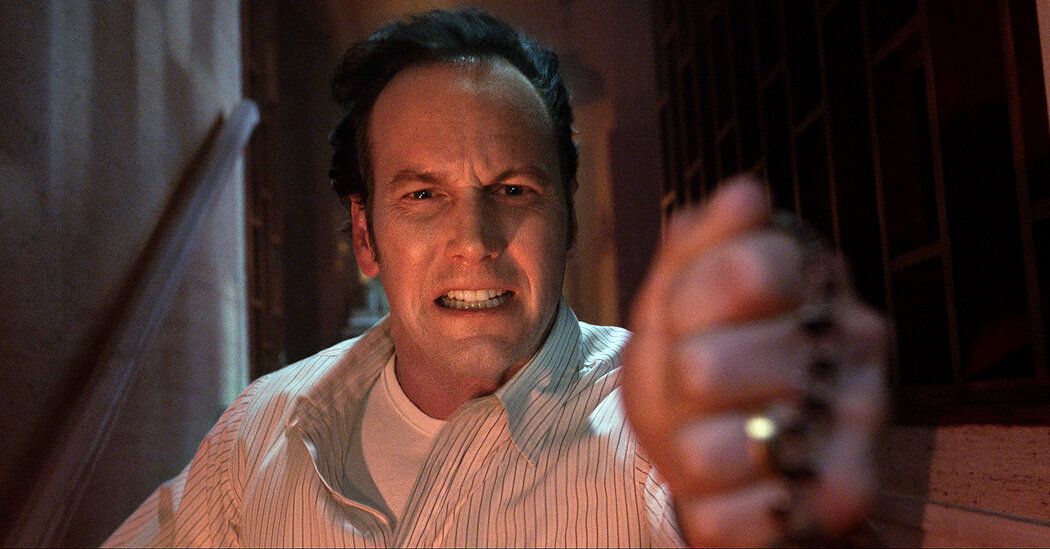 Ed Warren is sitting in a musty living room in North London, trying to establish contact with a demon. Behind him sits a little girl, said to be possessed. The demon won’t talk, she insists, unless he faces away and gives him some privacy. With his back to the girl, Ed gets down to business. “Now come on out and talk to us,” he says brightly.

Out comes the demon, cackling and taunting in a fiendish, guttural voice, like a cockney Tom Waits. He wants to rattle Ed, but as played by Patrick Wilson, Ed’s not easily rattled. Alongside his wife, Lorraine, he works as a paranormal investigator, and this is hardly his first tête-à-tête with a malignant spirit. “Your father called you Edward,” the demon snarls, trying to get under his skin. But Ed just rolls his eyes and shakes his head impatiently. “You’re not a psychiatrist, and I’m not here to talk about my father,” he says. “Let’s get down to business. What do you say?”

This scene in “The Conjuring 2” (2016), the sequel to the sumptuous, vigorously terrifying “The Conjuring,” encapsulates what these hit movies do so well. The director James Wan shoots the entire conversation in one long, unbroken take, zooming in so slowly that the movement of the camera is virtually undetectable. The demon, in the background, is a sinister blur. Instead, our attention fixes on Ed, staring ahead.

Wan is demanding a lot of his lead here — the effect of the scene hinges entirely on Wilson, and without a cut, in extreme close-up, he has nowhere to hide. But he proves more than capable. The five-minute scene is an acting tour de force, and one you might not expect in the middle of a haunted house picture.

The range of emotions in Ed’s face is mesmerizing. Wilson, a classically trained actor with a background in stage dramas and Broadway musicals, is able to do so much with subtle changes in the cast of his eyes and his manner that you can tell from moment to moment exactly how he is feeling — apprehensive, irritated, disturbed, chagrined. For a split second, his composure waivers. Then he steels himself, blinks and gains it back. This is a frightening confrontation, to be sure. But it’s compelling mainly for the intensity that Wilson exudes.

Of course, Wilson, who plays Ed again in the new sequel, “The Conjuring: The Devil Made Me Do It,” has been a known talent for more than 20 years. In the early 2000s, he earned Tony Award nominations for his starring roles in the musicals “The Full Monty” and “Oklahoma!,” and in 2003 he was nominated for an Emmy and a Golden Globe for “Angels in America,” the television adaptation of Tony Kushner’s play in which he played a gay Mormon attorney struggling with his sexuality during the AIDS crisis.

“Angels in America” is a more straightforward acting showcase, and Wilson’s performance, full of stifled passion and moral compromise, is sensitive and powerful. He shares scenes with Al Pacino and Meryl Streep, but his is the most affecting turn.

Like many celebrated stage actors before him, Wilson soon tried to parlay his growing prestige into movie stardom. The results have been mixed. Over the next few years, he appeared in a number of high-profile Hollywood movies, but many of them were poorly received, like the limp remake “The Alamo,” the over-the-top domestic thriller “Lakeview Terrace” and the big-screen version of “The A-Team.” When he starred as the reluctant superhero Nite Owl II in Zack Snyder’s ambitious adaptation of the graphic novel “Watchmen,” critics complained that he was miscast.

It was in 2010 that Wilson found an unexpected niche: the horror movie. That year, he starred in “Insidious,” an early experiment in the producer Jason Blum’s low-budget horror revolution and a creepy, atmospheric ghost story with a playful touch of David Lynch.

For a year, the “Offstage” series has followed theater through a shutdown. Now we’re looking at its rebound. Join Times theater reporter Michael Paulson, as he explores signs of hope in a changed city with Lin-Manuel Miranda, a performance from Shakespeare in the Park and more.

Wilson played Josh Lambert, who, for the first two acts, seems like the typical horror movie patriarch: stalwart, steadying and, as the haunting begins to escalate, staunchly disbelieving. He spends a lot of time reassuring his wife that she must be imagining the scary things she’s been seeing around the house and that ghosts aren’t real. Until it turns out that ghosts are real, and that in fact Josh has a history with them.

At the end of the second act, it’s revealed that Josh had an encounter with a demon as a child, but that his memories had been repressed. And Wilson, as he accepts this information, manages to subtly disclose a lifetime of trauma. With a faint shifting of the eyes and delicate tensing of the muscles, he conveys flashes of bone-deep dread lingering at the back of his subconscious. Suddenly, a familiar and somewhat flat character gains a new dimension, as Wilson transforms a stock type into someone dynamic and real.

Wilson reprises the part in “Insidious: Chapter 2,” with Josh’s body inhabited by a malevolent demon and Josh’s soul trapped in the spirit world. As the demon-Josh, Wilson has the difficult task of playing an evil spirit pretending to be human, convincing his loved ones that he’s the same old Josh as he secretly conspires to kill them. Occasionally, the mask of the happy husband slips, and Wilson reveals a glimpse of frenzied menace. It’s a terrifying performance reminiscent of Jack Nicholson in “The Shining.”

Ed Warren is Josh Lambert’s opposite. Ed’s role in “The Conjuring” movies is a stabilizing presence.

He and Lorraine (played by the wonderful Vera Farmiga) are called on to investigate happenings that seem to defy scientific explanation, and their arrival on the scene, usually after ghosts and demons have done some preliminary haunting, is accompanied by a sense of reassurance that is rare in horror movies. Wilson gives the calming impression of unflappable expertise, an almost fatherly stolidity, not unlike what Tom Hanks brings to many roles. However frightened we may be, we’re heartened that Ed knows what he’s doing.

Ed is a man of God, investigating the demonic possession on behalf of the church, and one of the most striking things about Wilson’s performance is the intensity of his religious conviction. When he thrusts a cross at a spirit to dispel its power or reads Scripture in Latin to save the day, he doesn’t seem to be simply holding props or quoting dialogue but to regard these objects and rituals with palpable awe. He makes you feel Ed’s faith, as well as his belief in evil and the supernatural. It makes the scary stuff scarier and feel more real.

Wilson and Farmiga’s screen chemistry has been widely praised, but it’s difficult to overstate just how potent they are together. Their warmth and tenderness are a crucial reprieve from the pulse-quickening horror around them, and the affection they show one another is appealing precisely because it contrasts so sharply with the rest of the action. They are so magnetic that their minor roles at the beginning of the “Conjuring” spinoff “Annabelle Comes Home” practically spoils the rest of the movie: Having had the pleasure of watching them at the start, you’re disappointed to see them leave.

Shortly after Ed’s confrontation with the demon in “The Conjuring 2,” he notices an acoustic guitar in the corner of the same room. The family of the possessed little girl hands it over to him, and he proceeds to imitate Elvis Presley and sing “Can’t Help Falling in Love” in its entirety. The scene does not advance the plot. It’s not a misdirect; it doesn’t culminate in some twist or revelation or jump scare. The openness and gentle humor Wilson embodies is worth a dozen heart-stopping scares: Indeed, that openness and humor are what makes the scares worth anything in the first place. “The Conjuring 2” is already 136 minutes — a more prudent editor might have advised cutting the extraneous scene. But this moment, so earnest in its sentiment, is the heart of the movie. Like Wilson’s performance, it’s perfect. 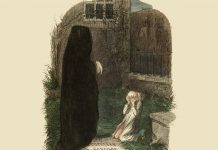 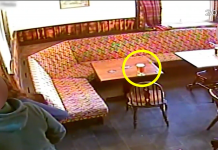