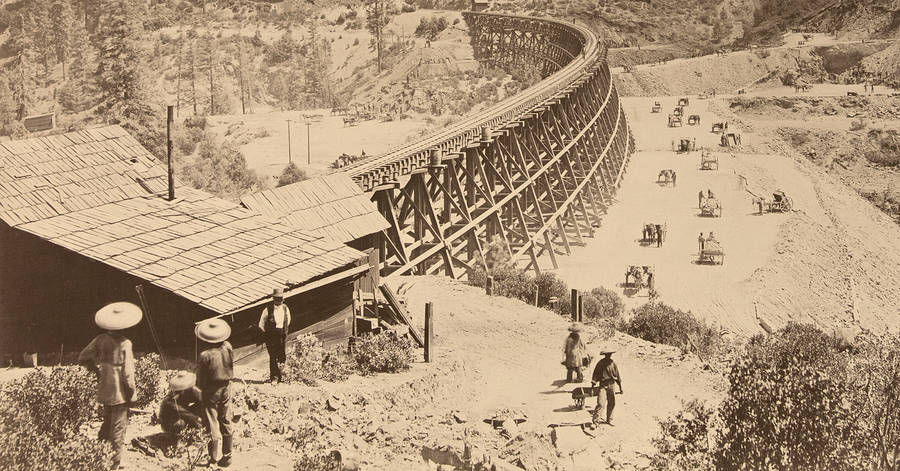 drove home a ceremonial gold spike to mark the meeting of the eastern and western lines of the Transcontinental Railroad. Nearly seven years earlier, President

had signed the Pacific Railroad Act, which lavished unprecedented financial inducements in the shape of land grants, loans and bonds on the Union Pacific Railroad and the Central Pacific Railroad, of which Stanford was co-founder. They soon began to lay rail lines toward one another across the vast, rugged West.

Many dismissed this undertaking as delusional. Stanford was deemed “a little off,” or perhaps even “insane,” to think his company could breach the solid-rock of the soaring Sierra Nevada mountain range. All the manual labor—creating roadbeds, blasting out tunnels and laying track—would require a massive work force then unavailable in California, the starting point of the Central Pacific. Nevertheless, in 1863 the railroad began laying track eastward from Sacramento; two years later, the corrupt and bungling Union Pacific forged tentatively westward from Omaha, Neb., in the face of sporadic Native American resistance.

The Chinese and the Iron Road

The end of the Civil War released a flood of laborers for the Union Pacific line: Irish immigrants, freedmen and Union veterans. The Central Pacific, on the other hand, attracted few white, black or Hispanic workers from California’s limited labor pool; moreover, the men whom they did hire regularly vanished once word of gold or mineral strikes in the region reached the railroad camps. So, who could the Central Pacific find to do the work? The Chinese. During the Gold Rush of the 1850s, several thousand Chinese men had immigrated from Guangdong Province to seek riches in the Gold Mountain, as they came to call California.

But the idea of turning to these newly settled foreigners met immediate resistance. When

one of the four directors of the Central Pacific, broached the idea of hiring Chinese as construction workers, his field construction supervisor, J.H. Strobridge, replied, “I will not boss Chinese.” An adamant Crocker purportedly retorted, “Did they not build the Chinese wall, the biggest piece of masonry in the world?” Crocker prevailed.

During the nearly five years needed to build the Central Pacific’s portion of track, an estimated 20,000 Chinese men worked on the 690-mile line. They came to constitute 90% of the construction force. Nevertheless, no Chinese workers appear among the dozens of dignitaries, officials and common workers assembled in Andrew J. Russell’s iconic photographs of the May 10, 1869 celebration of the joining of the rails at Promontory Point. Whether their absence was a consequence of racism or bad timing is an open question: Strobridge, who had come to admire the immigrant laborers, was honoring the nearest Chinese workers in his personal railroad car. But even if it was unintentional, their absence in the photograph is emblematic of history’s neglect of the critical Chinese contribution to what was perhaps the greatest feat of engineering and construction in United States history.

seeks to rectify this historical injustice in “Ghosts of Gold Mountain: The Epic Story of the Chinese Who Built the Transcontinental Railroad.” Mr. Chang, a professor of humanities and history at Stanford University, acknowledges the difficulties posed by the lack of any known diary, letter or journal written by a Chinese railroad workers. Famous for their frugality and for looking after less fortunate relatives in China, they insisted on receiving their pay in gold coin rather than paper currency. Nonetheless, as Mr. Chang concedes, “We have no record of where this immense amount of money was kept safely for future use, including for sending remittances back to families in China who were becoming increasingly dependent on the income. It is ghost money.” Phantom funds from the ghosts of Gold Mountain.

Significant aspects of these men’s experience are necessarily subject to conjecture or have to be reconstructed. Despite this daunting impediment, Mr. Chang has accomplished the seemingly impossible. He has researched obscure American newspaper accounts. He has drawn on Central Pacific correspondence and financial records and made extrapolations from accounts of other contemporaneous Chinese immigrants. He has even evaluated archeological evidence. And he has written a remarkably rich, human and compelling story of the railroad Chinese.

In gripping prose, Mr. Chang evokes the challenges the Chinese railroad workers confronted. To cross the Sierra Nevada, he writes, the Chinese

had to blast and dig their way through expanses of solid granite and brave some of the most dangerous working conditions imaginable. . . . They endured scorching summer heat in the high altitudes, dirt and choking dust, smoke, and fumes from the constant use of explosives. They survived isolation, desiccating winds and thin air, winter blizzards and freezing temperatures, as well as the ever-present dangers of accidental explosions, falling trees, snowslides, avalanches, cave-ins, illness, broken limbs and plain exhaustion—all to realize the federal government’s great ambition of uniting the American continent with a central artery. These workers, in no short order, helped solidify the westward future of the United States.

Mr. Chang begins to resurrect the ghosts of Gold Mountain in the opening chapter, devoted to life in the strife-torn province of Guangdong. He corrects many myths and misconceptions about the men who crossed the Pacific to San Francisco. They were not, he notes, “the poorest of the poor,” but “commonly mid-range in their socioeconomic position.” They immigrated voluntarily, intending to make their fortune (the dollar a day they earned on the railroad far exceeded what they could earn at home) and then return to China.

“
Workers on the Central Paciﬁc Railroad quit every time the rumor of a gold strike went through the camps.
”

On the West Coast, Chinese agents of the so-called Six Companies met new arrivals at the dock. Americans frequently assumed these were exploitative commercial entities; in fact, Ms. Chang explains, they were “a consortium of Chinese mutual assistance associations based on county of origin” that helped workers navigate a strange and frequently hostile environment.

“Ghosts of Gold Mountain” recounts the development of American hostility to the Chinese, which was particularly acute in California, where agitators promoted the notion that “

” had arrived to undercut white labor. Leland Stanford, ironically, had pandered to popular prejudices when governor of California in 1862-63, branding the Chinese “a degraded and distinct people” who wielded a “deleterious influence upon the superior race.” To his credit, Stanford would come to regret his public populism. After all, the Chinese “helped him become one of the richest men in the world.” And they did so at great personal risk: No one knows how many Chinese laborers perished, but Mr. Chang argues convincingly that the number exceeded 1,000.

The author masterfully recreates the two years that Chinese railroad workers devoted to blasting and chipping through solid granite to create the 1,659-foot Summit Tunnel, where daily progress was measured in inches. Particularly gripping is his rendition of the fierce winter of 1867-68, when more than 40 storms pummeled the summit and snow drifts reached more than 40 feet deep. Snow closed tunnel portals and compelled workers to live underground amid labyrinthine paths cut into the drifts. “Even snow at rest could maim,” relates Mr. Chang. “As late as the spring of 1868, many Railroad Chinese refused to work in the summit area because of the blistering intensity of light reflected from the snow.” A Central Pacific executive lamented that the only Chinese who worked were those who were willing to go “blind and [have] their faces pealed [sic] and seared as though they had been scalded in the face with scalding water.”

Mr. Chang puts readers squarely into the shoes of the Chinese workers, as in the following passage, where he describes the work of tunneling:

Imagine the noise, vibration, fatigue, and monotony but also the hellish confinement in those tunnels, lit only by oil lamp or candlelight! The air was thick with rock dust, acrid fumes lingered from previous explosions, water dripped and flowed from fissures in the cold rock, and sharp, heavy icicles hung down in the winter. Air temperature ranged from cold to frigid. Rock fragments flew through the air and into eyes and mouths. A moment of distracted attention, mistiming, or simple error and there would be a smashed hand, arm, or fingers. Work in that great dark maw of the mountain never stopped, as three shifts of eight hours each covered a twenty-four-hour day throughout the entire year.

Be the first to find out what’s new and what’s good. Get the weekend book reviews before the weekend.

Despite their willingness to work under infernal conditions, the railroad Chinese were scarcely servile. On June 24, 1867, at the peak of the construction season, 3,000 Chinese along 30 miles of track “in a fully coordinated and informed effort, put down their tools and refused to work.” One journalist labeled this “the greatest strike every known in the country.” The strikers were peaceable and disciplined. The men presumably struck for wage parity (they were paid considerably less than white workers, for work that was often far more dangerous). After a week, the strike ended. Although the Central Pacific refused the strikers’ demands, Mr. Chang judges it “a mistake to conclude, as most historical accounts do, that the Chinese ‘lost.’ ” They demonstrated that management could not take their labor for granted and, the author suggests, “collective action could be an important expression of will, a matter of achieving ‘face’ and self-respect. The specific outcome was less significant than the act of defiance itself.” Mr. Chang’s analysis of the strike is but one instance of the profound understanding of 19th-century Chinese culture that he brings to bear.

The author, who serves as the co-director of Stanford’s Chinese Railroad Workers in North America Project, has also co-edited a collection of scholarly essays on the subject. “The Chinese and the Iron Road: Building the Transcontinental Railroad” includes contributions by archeologists and academic historians in both the United States and China, discussing all aspects of the railroad Chinese experience. That book is clearly designed for an academic audience; fortunately, in “Ghosts of Gold Mountain,” Mr. Chang has mined expertly the extant material on the subject.

This weekend, the Transcontinental Railroad’s sesquicentennial is being celebrated at Golden Spike National Historical Park in Utah. Among the attendees may be some of Mr. Chang’s ghosts. “Old-time Chinese Americans to this day continue to recount haunting stories of death long ago in the mountains of California,” he writes at one point. “One story tells of places in the Sierra where, when the night is dark and cold winds blow, one can hear the wailing ghosts of Chinese railroad workers who died during the construction effort. They are lost, suffering, and still seeking a way home to find eternal peace.”

May “Ghosts of Gold Mountain” help them at least find lasting honor—so long delayed—for their sacrifice to the American experiment.

—Mr. Cozzens is the author of “The Earth Is Weeping: The Epic Story of the Indian Wars for the American West.”