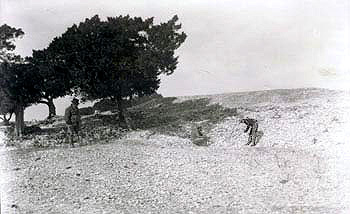 DAUPHIN ISLAND, Ala. (WKRG) — One of the Gulf Coast’s most haunted spots is down on Massacre Island which is known today as Dauphin Island.

In 1699, when the French arrived in the New World they found piles of bones on the beach and gave the island its bloody name.

The pulsating beat echoing sounds of the past ring out in one area in particular. Hall said, “There are people who say that in the shell mounds at night on some particular dates, you can see white lights emulating from the shell mounds, and that could have very well been the spirits.”

Hall continued saying, “But then there was always the Indian Chief… His name was Chief Double Head… The six-foot, red-headed Indian Chief that walked the beaches at night and he left phosphorescent foot prints in the sand.”

It may look peaceful during the day, but when the sun goes down, there’s an unmistakable eerie feeling. During the Civil War, Fort Gaines became central operations for blockade running. In 1864, the fort was involved in the Battle of Mobile Bay between Confederate and Union forces. Later the fort was used in the Spanish American War, World War I, and World War II.

Hall said, “People have driven by the fort and they have seen one of the females. I don’t know whether she would have been a wife, or a child, or what. In a full dress with the full hoop skirt walking the parapets.”

Do the spirits still roam, or is this all just a big ghost story? We may never know.