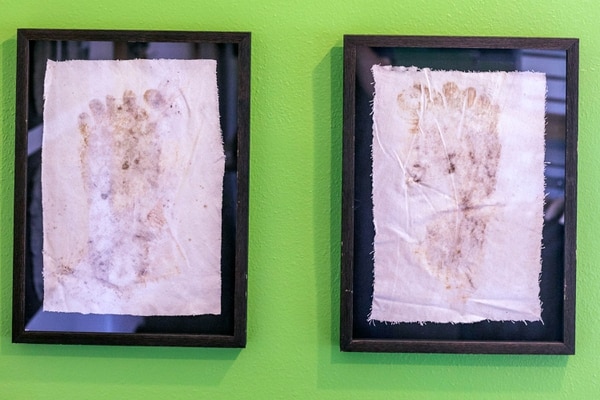 That stands for “Bigfoot I’d Like to Film.” His formal name, though, is Murphy. Standing 7 feet 6 inches tall, he is the centerpiece of the North American Bigfoot Center, the museum Barackman is about to open in a dilapidated strip mall in Boring, Ore.

Crafted by a professional animatronics studio in Ohio, it features all the details of what Sasquatch supposedly looks like: bare knees, giant brow ridge, thin hair, a huge ass. It’s hard not to drop into the fetal position while staring this thing in the face. Barackman says it’s the most accurate replica of the elusive cryptid he’s ever seen.

He would know. For seven years, Barackman traveled around the world searching for Sasquatch on Animal Planet’s Finding Bigfoot. Now, he’s compiling all his research under one roof, just 45 minutes from Portland.

Barackman and his wife, Melissa, live in Clackamas County, the area with the highest number of Bigfoot sightings in Oregon. There are a few other museums related to cryptozoology in Georgia and Maine, but none around here, where the monster’s legend looms largest.

At the moment, the Bigfoot Center—which soft-launches to the public this week—is a bit messy. But Barackman and museum director Scott Minton have big plans.

“When we started work on the concept and tried to figure out what the [Bigfoot Center] is gonna do: ‘Is it a museum? Is it an interactive space? Is it a retail space? Is it a community space?'” Minton says. “Yeah, it could be all those.”

The plan is for the museum tour to flow chronologically through different eras. Visitors will begin by learning about the significance of Sasquatch in Native American history, then explore the post-colonial era, when explorers began documenting sightings in historical writings.

Then, you’ll get to have your own Bigfooting experience.

One part of the museum will soon be transformed into a simulated forest, where vision and hearing is obscured by trees and the squall of wildlife. What you think is a Sasquatch may just be a bear hiding in the trees. Are you tracking Bigfoot—or is Bigfoot tracking you?

“That’s gonna be the value of the museum,” he says, “to show the depth and the seriousness of the work that’s been done on this fantastically fun subject.”

It’ll be another year before the museum is fully built out. But there are plenty of things for visitors to see right now—including Murphy. Here are five of the most fascinating artifacts currently on display.

In extremely rare cases, dumping your junk in the forest can lead to big discoveries.

Last February, a woman from Cheshire, Ore., came across a futon mattress in the nearby woods that had two giant footsteps on it. Her friend emailed Barackman that night, and the next day he sent research partner Chris Minniear to retrieve it.

It took two days to find, but sure enough, the footprints aligned with the peculiar bone structure of a Sasquatch foot. The tracks are framed in the gallery—the only prints, to Barackman’s knowledge, that are gathered from cloth. If only the creature had decided to take a nap.

In summer 2017, Kentucky-based Bigfoot researcher Tom Shay experimented with hanging a jar of Nutella 8 feet high in a forest where a Sasquatch was suspected of residing. Coming back to the jar a month later, he discovered it uphill from where he’d placed it, opened, with four large, fingerlike scoops in the spread. He promptly preserved it to make a cast.

Using the cast, Melissa Barackman crafted her own jar out of silicone that replicates the indentations of the original. The cast even seems to have fingernails. Museumgoers can put their hands in the jar to compare the size of their fingers to Bigfoot’s.

It’s believed Sasquatch sometimes twists tree branches during strolls through the forest, and some of the recovered branches are astonishing. The Bigfoot Center has two on loan—one is knotted like a pretzel, the bark bursting at the seams, while the other is more subtly mangled, but no less impressively.

It’s hard to imagine how much force would have to be exerted for the interior pressure of a branch 3 inches thick to cause it to visibly twist, but seeing the manipulations up close is uncanny.

The Bigfoot Center will feature authentic Native American masks as part of the planned indigenous wing of the museum, but some are on display in the gallery now. The masks—carved by First Nations master artist Alfred Robertson—depict Bukwas and D’sonoqua, wild men and women of the woods who some believe are the Kwakwaka’wakw tribe’s interpretation of Bigfoot.

“We’re trying to be really conscientious of not culturally appropriating anything,” Minton says. “We want to open the door for Native people to come and see these things.”

The late Freeman was a Blue Mountain watershed manager from Walla Walla, Wash., and a polarizing figure in the Bigfooting community. Some believe his catalog of footprint casings, videos and photographs are sophisticated hoaxes—his most famous video, a 1994 clip of an alleged Sasquatch family in the Blue Mountains, is still standing against scrutiny.

Minton and Barackman will let visitors judge for themselves. And they’ll even have original 35 mm photographs that only a few Bigfoot researchers have laid eyes on—a medium that’s kind of hard to Photoshop.

A Leading Sasquatch Researcher Is Opening Oregon’s First Bigfoot Museum. We Got a Sneak Peek.

Bob Filbey Has Spent 30 Years Logging Bigfoot Sightings Up and Down the West Coast. Here’s What He’s Learned.

I Camped Out Along Oregon’s Bigfoot Highway, Hoping to See Something I Wasn’t Sure Was There

Eight Places to Find Bigfoot in the Portland Area