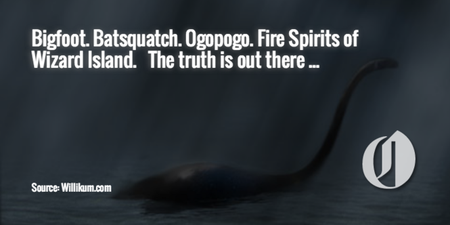 10 most terrifying and mysterious creatures of the Northwest

Earlier this week, a Scottish boat captain claimed he had discovered a previously unknown trench at the bottom of Loch Ness. And hey, it’s just the right size for the lake’s legendary monster to hang out. Coincidently, the “X-Files” is about to reborn on TV. With all of this cryptozoology in the air, we thought we’d seize the moment to look at the Northwest’s 11 most mysterious creatures.

Surrounded by jagged Cascade peaks, 60-mile-long Lake Chelan in north central Washington is supposedly home to the Ogopogo, a monster with a long powerful tail. Reports of sightings and attacks date back more than 150 years. The creature’s legend is also swimming in Lake Okanagan, British Columbia.

First sighted flying above woods near Mount St. Helens in 1980, the horrid-looking Batsquatch has purple skin, piercing red eyes, an ape-like head and wings. Ugly. Cryptozoologists have speculated that it’s a flying primate. Think of it as Bigfoot’s airborne cousin.

There was a time, not too long ago, when Bigfoot sightings were considered serious news in the Northwest.

The ghosts of Wizard Island

As the deepest lake in the United States, Crater Lake unsurprisingly has its own water-monster legend. But even spookier are the fire spirits once belonging to evil men that haunt the lake’s Wizard Island. The National Park’s rangers have reportedly observed campfires on the island and boated out, only to find no traces of flame or smoke. Creepy.

Between June and October of 1990, a Vancouver farmer on the banks of the Columbia River found five of his cattle dead. The cows’ carefully dissected remains, including eyes, tongues and organs, were scattered across three different pastures. An Oregon State University analysis found the animals’ wounds were consistent with “electrosurgical excision” and “heat-induced injury,” possibly from a laser. Neighbors told investigators they had heard strange sounds they couldn’t attribute to farm machinery. A woman driving home late one night also reported being startled by a “little man” apparently carrying a “flashlight” in one of the pastures. It is one of six mysterious cow-mutilation cases in Washington and Oregon possibly linked to extra-terrestrials, UFO theorists say.

A.K.A. “She-Daemon of the Shadows.” Part of H.P. Lovecraft lore, the Mynoghra is the succubus-fiend cousin of Nyarlathotep, sporting alien traits and tentacles in place of hair. She lives in the forest and is worshipped in witch-cults of Salem, Oregon. Charming.

Does a giant primordial sea creature lives in the Puget Sound, Lake Union and Lake Washington around Seattle? There have been plenty of sightings dating back to 1736 – in a movie. Willatuk is the clever invention of filmmaker Oliver Tuthill, who mapped out a 300-year history of the creature as a back story for his production.

In 1934, crew members on the Columbia River lightship, spotted a 40-foot creature with a horselike head, barnacled ridges and long tail at the mouth of the Columbia River near Astoria. They reportedly watched it for hours through binoculars. In 1963, Shell Oil Company explorers on an oil-drilling expedition off the Oregon Coast supposedly filmed the creature swimming in 180 feet of water.

Thought to be related to the Loch Ness monster and Ogopogo, this ocean serpent is thought to swim on the Pacific Coast. A famous photo from 1937 supposedly shows the carcass of a Cadborosaurus that was retrieved from the stomach of a sperm whale.

What in the name of Roger Patterson? Is that a goblin? An alien? A Bigfoot? A lab experiment gone terribly wrong? Whatever it is, it was filmed in the forests of Oregon, according to the video’s YouTube page.

If you see an amphibious Octopus Paxarbolis in the Olympic National Forest, don’t be afraid. The species is typically very shy, but it doesn’t bite. Predatory seahawks have supposedly hunted the tree octopus into endangered status. Oh, and they’re an online hoax, designed to show just how gullible people on the Internet can be.