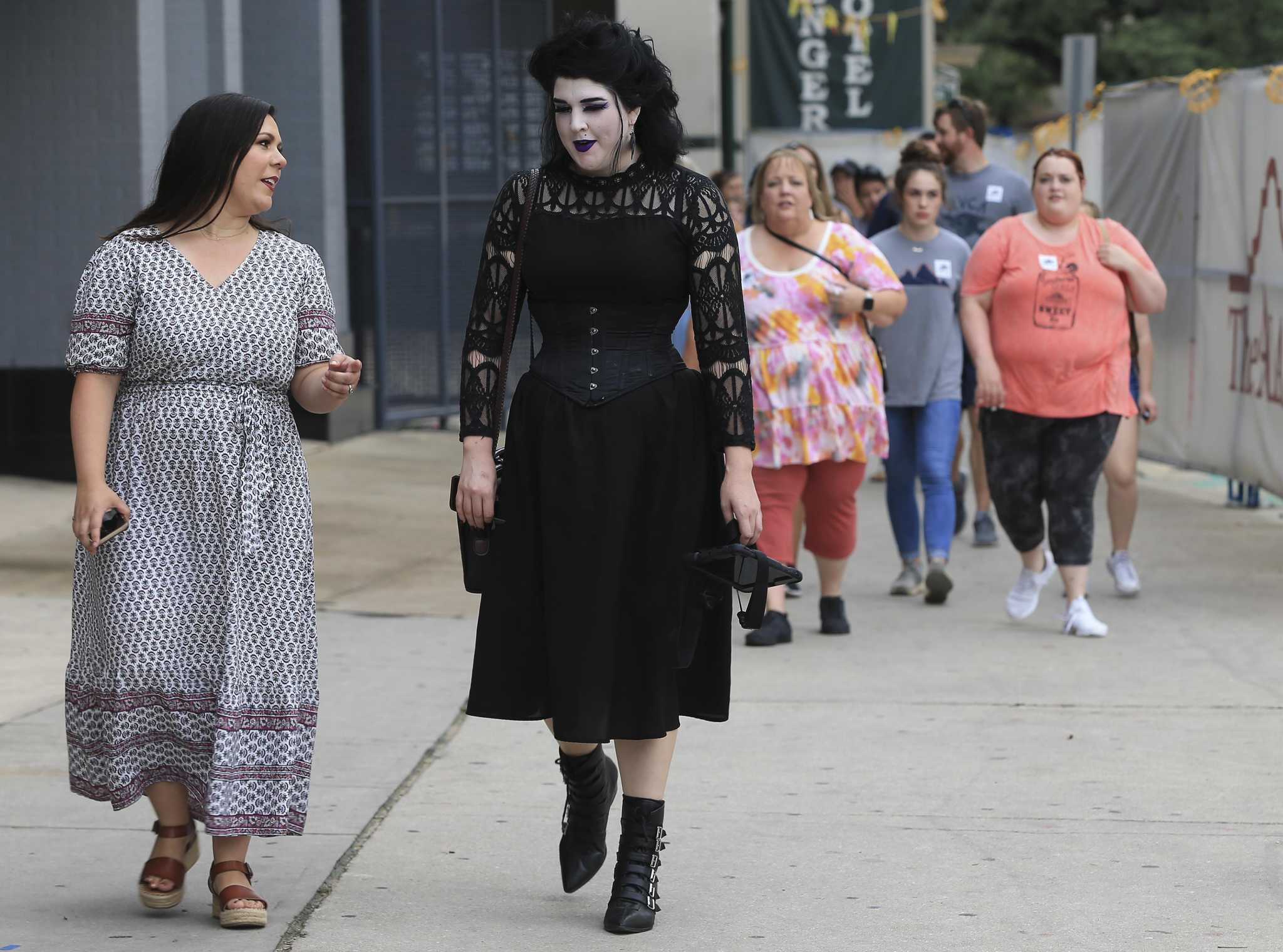 Lauren Swartz’s interest in the paranormal began when she was a child.

At her family’s house in Boerne, she and her siblings heard footsteps in the hallway in the middle of the night, but when they opened their bedroom doors there was no one there.

She found Native American artifacts while playing outside, and a friend who was a medium said there were spirits connected to the land. Sometimes she’d hear loud knocking on her door when she was home alone, and when her family returned from an outing they would see people walking around inside the house.

“I would never say anything was malevolent,” Swartz said. “It was just creepy.”

Her mother was a fan of the paranormal and drove the family around during Halloween and read ghost stories by local author Docia Schultz Williams.

Swartz’s ancestors came to San Antonio from the Canary Islands and her family also instilled in her a deep appreciation for history.

Today, she owns Sisters Grimm Ghost Tours, a business she started nearly a decade ago at age 25 with her sister. Sisters Grimm hosts walking and bus tours around downtown and has an office and gift shop at the Menger Hotel.

Swartz, 35, recently talked about launching the business, paranormal experiences and operating during the coronavirus pandemic. The interview has been edited for brevity and clarity.

Q: What prompted you to start Sisters Grimm?

A: I started giving mini-tours to family members who would come in from out of town, and I’d talk about our ancestors and tell them ghost stories. I just started doing it on the side.

My husband was going to school and bills piled up, with loans and everything. Because I was doing the tours on the side and I loved and enjoyed it, I decided to start my own business doing it.

I told my sister what I wanted to do and she wanted to join me, so we created the name Sisters Grimm. We didn’t want to be “San Antonio Ghost Tours.” We wanted something that people would remember.

It just started growing and growing, and we started hiring more people and now I do it full time. My sister got married and moved away, but my sister-in-law worked for us for a time and I had another sister who answered phone calls, so it was definitely a sisters’ business.

Q: How did you decide where to stop on the tour?

So I had been on multiple ghost tours, but had never taken a ghost tour in San Antonio. About 12 years ago I took a tour and was very disappointed because it was all about ghost hunting and how to catch a ghost. It really didn’t have anything to do with the history of San Antonio, and why the ghost is haunting a particular place and what the history of that place is.

I knew that San Antonio has some of the most amazing history in the entire country, and I thought they had dropped the ball on that and were going for what was on TV. We wanted to be different.

There were a few spots they used on their tours and I did more research and found out a lot of information. For example, they’d go by the north Holiday Inn Express downtown and say, “Where this building stands, there used to be a jail and in this jail they would hang people,” and that was it.

I was curious about that, and years later I went to the library downtown and spent time researching and looking through old articles. I found out that the Holiday Inn Express was actually the original jail, and it wasn’t demolished but was turned into the hotel. They had a whole story about Clemente Apolinar, who was the last person hanged there. It was fascinating. I thought, “Why are people not talking about this on the tour?”

Our tours are about 60 percent history and 40 percent ghost stories. Many people have a misconception that on a ghost tour they’re going to go inside abandoned buildings and hunt for ghosts or they’re going to go inside a theme park haunted house where people jump out and scare them. But we’re like how a classic ghost tour originally was — we talk about the history of a building and why it’s haunted.

Q: Do guests often encounter ghosts on tours, or is that rare?

A: One of the questions we get asked is, “Are we going to see a ghost on the tour?” We tell them they might. It’s never a guarantee. We always recommend people take photos because often they’ll get some really creepy things that your eye can’t see but a camera can capture.

We’ve had spooky things happen on the tour. There’s one location at the Spanish Governor’s Palace that all the tour guides have had experiences with. I’ve had my hair pulled there. I’ve had somebody pulling on my outfit trying to get my attention while I was giving the tour. I thought it was a child and then once I was done talking, there was no one behind me. We’ve had multiple children see a ghost through the window of the Palace.

We go to one of the city cemeteries, and I’ve seen out of the corner of my eye somebody walking through the tombstones and then disappear. There’s little things like that that happen all the time, but it’s never a guarantee that you’re definitely going to see something.

Q: Does San Antonio have a high number of haunted sites to choose from because of its age and history?

A: A big portion of it is how old it is, how long it’s been around.

Q: Do the stops on the tour change as you find out about new stories and locations, or is the lineup set at this point?

A: It changes. If it’s not the location changing, it’s more information we’ve learned over the years and more stories we’ve heard.

We’ve gotten to the point where we have places contacting us and saying, “Hey, this building that we are in has great history to it and is very haunted.” We’re getting a lot of those, so sometimes we change it up and include those places if we feel like it has a really good, viable history.

Q: How did the pandemic affect the Sisters Grimm?

A: It started around spring break, which is usually a very busy time for us. We closed around mid-March, reopened with restrictions and small groups and then went into another lockdown later in the summer.

I’ve never seen downtown look like such a ghost town. It was very eerie being down there and seeing a place that’s usually so vibrant and full of life be completely devoid of life. It was like the great unknown. It was scary. There was a lot of uncertainty.

It started getting really busy again in October and then it kind of died down again. In March of this year, when everything opened back up, we saw the biggest influx of tourists we have seen since starting Sisters Grimm.

I had wondered if people were ever going to want to come back to a downtown area — and apparently they do. It was so exciting that businesses opened back up again. It was also really sad to see how many went out of business during the pandemic.

I feel like downtown changed a lot. There were a lot of businesses that never reopened again. I felt really fortunate that we were able to still reopen.

Q: What percentage of customers are ghost believers versus ghost skeptics?

A: I would say 50-50. It’s funny because it’s usually a wife pulling along her husband to go on the tour. I always feel like women are more open and receptive to the paranormal and spiritual things than sometimes men are. The men are kind of like, “Well, I’m just here for the history,” but they end up liking the tour at the end.