Home Paranormal News The haunting of San Antonio’s Hot Wells ruins, as told by its... 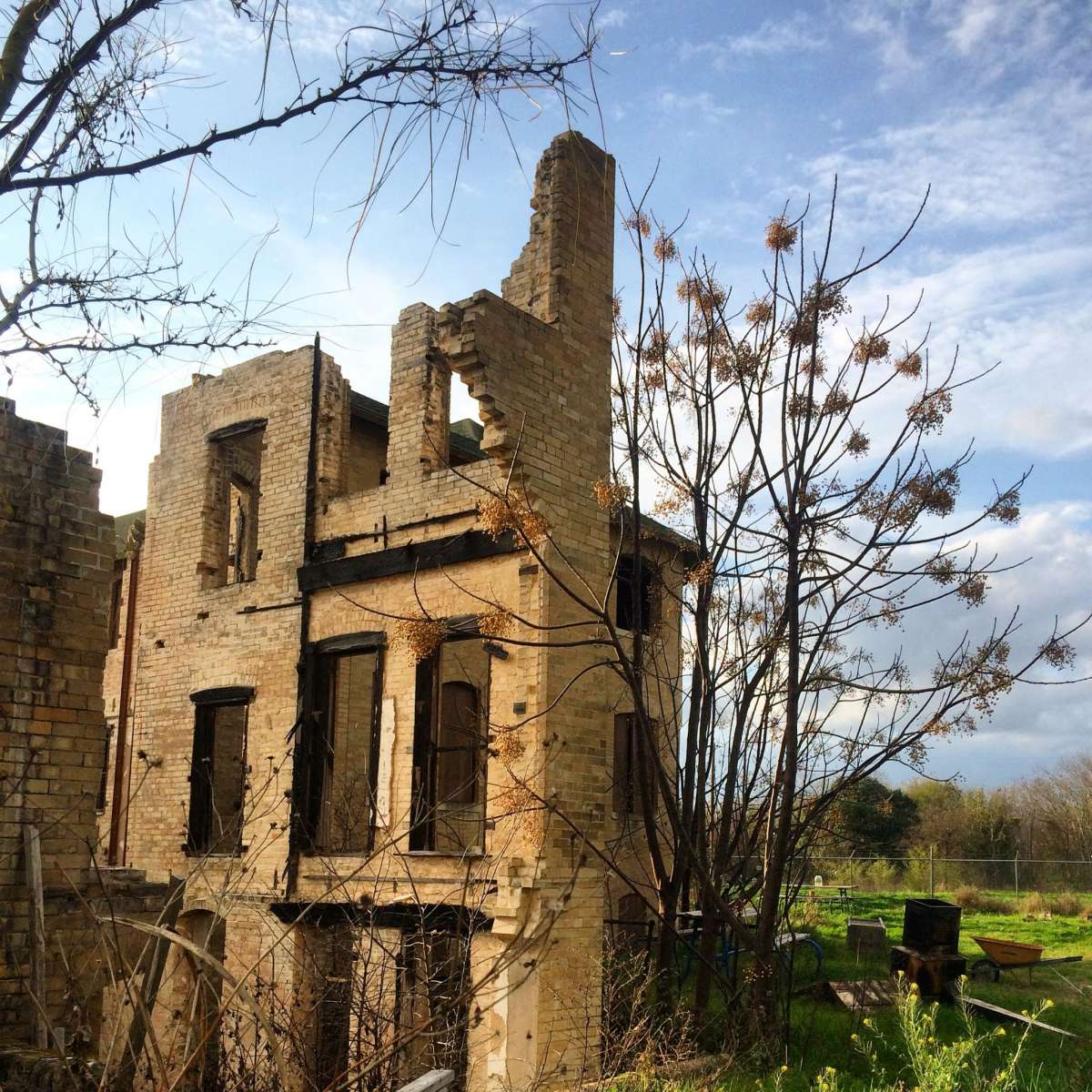 Sometimes the stars align, and a young artist takes up residence at a shambolic historic property, becoming its unofficial tour guide. In the serendipitous case of Justin Parr and the Hot Wells Ruins, located on San Antonio’s Southside, the property in question reveals itself to be riddled with friendly (if creepy) paranormal activity. I spoke with the glass blower and owner of Blue Star’s Fl!ght Gallery, about his wild experience living in a converted shipping container at the foot of the haunted ruins.

It was 2012, Obama was president, and Parr was running in circles with local real estate investor James Lifshutz. Lifshutz, the previous owner of Hot Wells before it was converted into an official park, also owns the Blue Star Arts Complex, where Parr houses his gallery. The two got to talking, and it was decided that Parr would leave his perfect King William apartment to live at the ruins while helping Lifshutz maintain the property, which at the time was in complete disrepair.

The young artist was excited about the opportunity, and got to work converting the shipping container into his new home, complete with plumbing and new electric that he installed himself.

Turns out, Parr’s previous home was known to have a strange presence inhabiting it, so he didn’t bristle too much at the idea of living at Hot Wells alone, despite Lifshutz divulging that they had a backlog of ghost hunters requesting tours. Parr took them on, and since he was there anyway, began leading the tours. After all, he takes these things with “a grain of salt” he tells me.

“I was always kind of a cheerleader for Hot Wells, with the ultimate goal of it becoming a park and that was what James had envisioned for it,” Parr says.

“He really cared about it and wanted to see it be preserved,” he continues, “it just ties into the history of our city and how we became what we are.”

After developers wised up to the professed healing properties of the sulfuric spring water bubbling underneath what is now the Hot Wells Ruins, a health spa heyday followed. From the 1890s to World War I, the area near the San Antonio Missions developed from a bathhouse into a glittering Hollywood hangout. Unfortunately, while the high levels of sulphur may have had healing properties, they also made the hotel highly susceptible to fire, including two major ones in 1894 and 1925.

Though, by the 1980s, after changing hands a number of times, the structure amounted to nothing but ruins. In 1999, Lifshutz acquired the property, hoping to revitalize and preserve it. But even two decades later, more changes to the space are underway.

Aside from the fires, there is no notable evidence or stories of deaths at Hot Wells, but that doesn’t mean it doesn’t have its fair share of spirits. At the start of his Hot Wells tenure, Parr would host lots of parties for those fortunate enough to find themselves in the 2010s San Antonio artist community. Parr had gathered some of the old bricks collecting at the base of the ruins and used them to build an outdoor patio, where he would often host guests.

Increasingly, the ghost hunters who would pass through mentioned that the spirits would comment on these events, claiming they enjoyed the parties because they reminded them of what Hot Wells used to be. Parr, who mentions he was cautious of these claims, began to notice how the “ghosts” seemed to be very aware of details of the party, and would describe them to the paranormal investigators in a way that Parr found subtly strange.

“It was always positive messages from the ghosts,” Parr says, laughing.

Around the same time, on a clear evening around midnight, Parr headed over to a nearby hot spring (before the city plugged them up) to take a nice soak under the full moon. Earlier, he and some friends had spent a better part of the day boarding up some clamoring windows attached to the ruins, since they were often a disturbance in the wind. That night, Parr was alone, but suddenly he could hear the sound of heavy footsteps coming from the second floor of the ruins. Then, one of the building’s boarded up windows burst open, flapping loudly despite the nails laid into it hours before.

In the years that he lived at the foot of the ruins, Parr had many friends report sightings of a woman’s figure in the top window of the building. He was convinced they were seeing shadows, until one night, he inexplicably woke up in the dead of night, with something telling him he needed to go outside. Still squint-eyed, he found himself staring out at the figure of a woman in the same window, dressed in clothes not out of fashion … for the turn of the 20th century. He turned and looked back at it three times before forfeiting confusion and going back to bed.

“It was an ephemeral feeling, but I also just kept wiping my eyes like, ‘Am I crazy?'”

All the best and most convincing ghost experiences, Parr tells me, started to occur after a specific visit from a local ghost hunter that goes by the name of “Paranormal Paul.”

Paul, an imposing, big-boned, and pale presence, apparently began his ghost-hunting endeavors to disprove others, but over time, he began to believe.

Of all the paranormal people that passed through the site, Parr explains that Paul seemed to be one of the most believable.

On Halloween 2013, Parr hosted a fundraising party for the now disbanded San Antonio Artist Foundation. Around 100 people showed, and for the sake of novelty, Parr convinced Paranormal Paul to give the guests a taste of the ghosts.

Back then, you were able to move more freely about the grounds, and Parr had the green light to give his guests tours on the second floor of the creaky and relatively hazardous ruins.

In the spirit of Halloween, Paul and Justin worked out a deal for the event, where Paul would organize something to freak everybody out. Paul, who communicated with spirits with a creepy EVP (Electronic Voice Phenomenon) ghost box, consorted with the ghosts and arranged for them to interact with the guests with otherworldly touches and hot and cold spots.

Parr was down for the ride, not expecting the scary scene that was to unfold.

Throughout the event, Paranormal Paul asked the crowd if they were experiencing any of the paranormal symptoms he had arranged, and early on — as a skeptic might expect — no one had experienced anything.

It wasn’t until he led everyone to the top of the ruins during a tour later that night when things started to get weird.

“Everybody’s at the top floor in a concentric ring, and Paul’s in the middle with his ghost box and then he starts trying to talk to the ghost, and the ghost box just starts yelling, ‘Danger! Danger get out!,’” Parr tells me. Imitating the ghost box, he affects a gruff and urgent tone.

Paul dismissed it, saying that everything was fine and stuff like this is typical, but Parr, feeling responsible for everyone, decided to cut the tour short — just in case. The group descended, and headed to continue the party outside.

“Everybody is outside of the ruin, kind of hanging out, and Paul’s like ‘Man I’m kinda disappointed the ghosts didn’t really interact with anybody,’” Parr tells me.

Some time passes, and then suddenly, two girls come running toward the crowd in hysterics.

Apparently, the pair had been trespassing in an off-limits section of the ruins. While inside, something had been grabbing at them and breathing down their necks. They were pale and terrified.

After no guests had claimed to experience any physical ghost engagements all night like Paul had said, Parr directed the women to the paranormal investigator to share the news.

“They went to talk to Paul and I was like, ‘Okay, this is crazy!” Parr says.

Years pass, and he doesn’t see Paranormal Paul again, but then something happened that confirmed the Hot Wells ghosts were still holding up their end of the deal.

The case of the scared skaters

One day, Parr’s professional skateboarder friend called him up and told him three guys from a skate team were rolling through to film a video in San Antonio, and were looking to camp “somewhere weird” for the night instead of paying for a hotel. Naturally, they decided they would stay in the ruins of Hot Wells.

The skaters and Parr hit it off, and stayed up drinking until probably ’til 2 a.m. Parr went to bed, and woke up at the crack of dawn, like he always does, but his new friends were nowhere in sight.

“I looked out the window and their van was gone,” he says, thinking the Irish exit was strange.

The guys had stayed at the top floor of the ruins in sleeping bags. Shortly after noticing their van was gone, Parr got a text from one of them saying they left to film early and they were headed back to Houston.

“They wanted more than anything in the world to explore this whole place during the day tomorrow, I’m like, what happened?”Parr’s friend who arranged the evening, called him around 2 p.m, demanding to know what happened. In the dark, Parr immediately called the skater who had texted him.

“We didn’t think you would believe us,” he told Parr, before describing their experience staying in the Hot Wells Hotel.

As it turns out, the skateboarders set up their sleeping bags, but rather far apart from each other, not knowing they were in for hell. All through the night, they individually experienced something grabbing at them, strange feelings, and the sensation of the environment growing rapidly hot and cold. Finally, around 5:30 a.m, one sleepless skater, exasperated from the experience, shouted, “Enough!” His friend bolted up, glad to not be the only one experiencing it, and they immediately booked it out of there.

When the Hot Wells ruins began the first phase of city park development in 2015, Parr still lived on the grounds, but in a section deeper in the woods and technically off park property. Today, he’s still the park’s main advocate. Usually, he explains, whatever presence is there doesn’t typically bother him. Over the years, he has accidentally fallen asleep in the ruins several times without being disturbed. Generally, he feels like the spirits are friendly.

When I suggest that it’s likely because the ghosts enjoy his parties, and that their relationship seems outwardly, rather symbiotic — he lives off the land, they feel entertained — he doesn’t disagree.

No longer living at the base of the ruins, the height of his paranormal encounters appear to be behind him. But for Parr, living on the historic grounds as the artist in residence — even if he now resides a littler farther away from the building  — remains an exciting adventure.