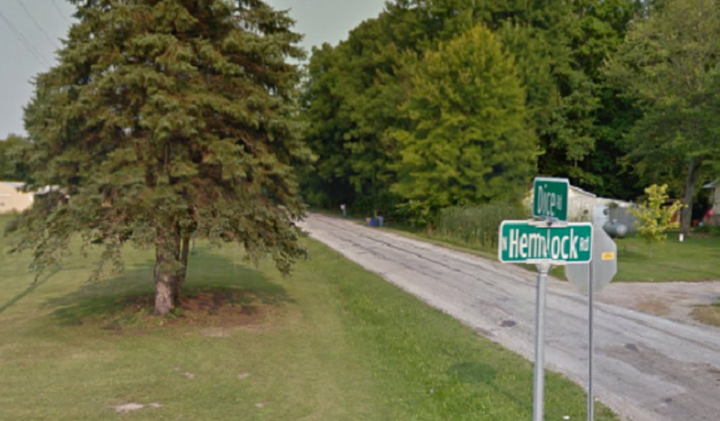 Dice Road crosses a rural section of Michigan between Saginaw and Midland, and with three reportedly haunted sites, it could be the most cursed road in the state.

It is one of the most well-documented paranormal cases in the nation’s history. So, it’s no wonder that Midland residents are taking such an interest in the paranormal happenings on the road and in the original home.

The mystery spans over four decades. And, it began with a man named Harold Pomeraning in 1974.

Pomeraning owned the home on Dice Road in Merrill when the hauntings began. After being terrorized by loud pounding noises inside and outside the home and unexplained fires, he contacted the Saginaw County Sheriff’s Office.

Deputies couldn’t figure out what was going on. They checked for footprints, searching for any evidence of people prowling around, and they looked for damage on the exterior of the house. They never could find any physical evidence to explain away the strange occurrences, according to retired Captain of the Saginaw County Sheriff’s Department, Fred Clark.

“I would say to a doubter, not to doubt. There are a lot of things that happen in this world that are unexplainable. And, I would also say that many of these things, we’re not to know,” Clark said.

Retired Sergeant of the Saginaw Sheriff’s Department, Charles Frisby, recounts his time at the home.

“This Dice Road corridor is kind of strange,” Frisby said. “We have the cemetery on one end and the Pomeraning home up the road. I heard the noise, I saw stuff out there. I don’t know how to explain it, But, I’ll tell you one thing. I saw it.”

With a scary story to be told, filmmaker Steven “Prozak” Shippy jumped on the opportunity to make a movie about Dice Road as the seventh installment in his “Haunted Saginaw” series.

“To me, when you spend all of those resources and can’t prove anything either way, you did prove that it was paranormal activity,” Shippy told Mlive. “There is no paranormal case in the world with even a tenth of this police activity.”

When Shippy heard about the story, he began doing some research and then he stumbled upon a binder full of police reports about the home. He talked to former officers who worked on the investigation, neighbors and anyone he could find who might know something about the home. He’s also visited the home.

The things seen on a nightly basis are hard to believe. But people of all ages and backgrounds recall stories detailing the times they visited Dice Road.

In a Facebook post in a Midland County community group, Jessica Gambino asked members to detail their experiences. She was inspired to do so after watching Shippy’s documentary.

The post took off. With more than 450 comments, it appears that many have reported encountering something paranormal out on Dice Road.

One commenter said, “I had a friend who lived on Dice Road in the ’70s and saw all the action with police and the investigation with the haunted house! It was real!”

Another Midland County resident, Shannon Schulz, said, “I went with my now husband (fiancé at the time) on Halloween with some friends at midnight. We got there at 11:50 p.m. Nothing. Then, right at midnight, all these orbs or ghosts appeared. Each one was above a grave in the cemetery. Just bouncing up and down. We just about pooped our pants and left. When we were driving there it was clear, but leaving it was foggy and creepy. It was something like a movie.”

Many residents agree that they, “Wouldn’t go there at night for any reason.”

Someone else even said that they went into the woods and got a lady on camera.

This apparition of a woman has been seen several times coming out of the Dice Road Cemetery at odd hours of the night and she could be the source of the strange occurrences. Filmmaker Shippy posits that the Pomeraning home may have been cursed after Harold Pomeraning had a dispute with a neighbor believed to be a witch.

Other Midland residents are not so quick to believe the mystery.

“I live 1.5 miles from there. One of my patients that just passed is buried there along with his wife and family. I spoke to his kids and brother. None of them have experienced anything. I drive by there all the time, even during the night, and nothing has ever happened. I’m not afraid of any of that stuff,” Nicole Zins said.

So, who occupies the home today?

The owners now, Dave and Louann Larsen, have been there for more than 40 years.

Never believing their home to be haunted, the Larsens described some strange happenings, like an antique radio making noise when it wasn’t plugged in, and objects being mysteriously moved.

“Louann has a high school friend that was divorced and dating a part time policeman with the Saginaw County Sheriff(‘s Office),” Dave said. “And, he and I went fishing one day. On the way home I said, ‘Hey, maybe next weekend we could have you guys over to our house for a barbecue.’ And he said, ‘No.’ And I said, ‘What do you mean no?’ And he said, “I’m not going to your house. That’s all I’m saying. I will not go to your house.’ Come to find out, he had been here, through the sheriff department. That threw up a red flag showing that something had gone on here.”

In addition, Larsen’s two daughters have an eerie story. Growing up they only knew a little about the home, but as they got older, they learned much more.

“My parents went out to dinner and we were here alone, sitting in the main living room.” Julie Larsen said. “We saw a flash outside and my dog started barking and got up on the bay window. And, then we looked and some guy put his face up to the window.”

“It was like a white face. It was literally like a glow,” Bridgette La Joice, Larsen’s other daughter, said. “You couldn’t see much of anything except a round, white head peeking in the window.”

“We ran into the other room and Bridgette called our neighbor,” Julie said. “It was snowing and there were no footprints or anything. There was nothing.”

“I would like some clarity to it,” she said. “It’s always in the back of my mind now. And, my kids are here quite often and now they’re questioning things.”

Interested in learning more? You can watch Steven Shippy’s documentary, “A Haunting on Dice Road: The Hell House”, on Amazon Prime.