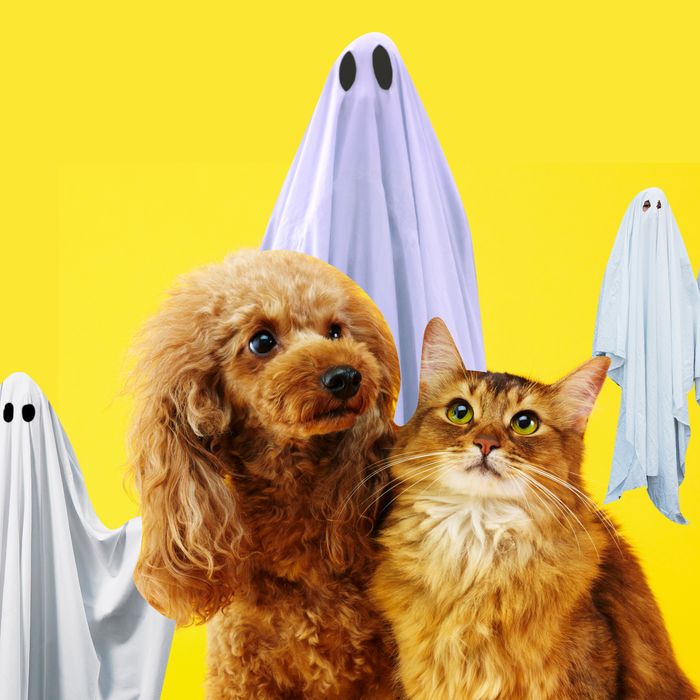 I love my dog, Cleo, so much, but she’s not exactly a canine rocket scientist or anything. So I didn’t think it was that odd when, one night a couple of years ago, she started intently staring into an empty corner of my apartment. As my roommate and I stood in the kitchen watching her — her small body fully alert in front of an empty wall — I felt a great fondness for my sweet, simple little mutt. “That’s my girl,” I thought. “Firing on all cylinders.”

“You know what it means when an animal stares into an empty corner like that?” my roommate said. “It means there’s a ghost in that corner, and she can see it.”

“Oh,” I said, and didn’t question the statement further.

Over time, my roommate’s comment calcified into fact in my mind, and every time I’d see my dog staring at nothing I’d think “Hm, must be a ghost.” It never spooked me. Their business seemed to be with Cleo, not me.

Now, though, with Halloween upon us, I decided to investigate this claim further. Can pets see ghosts? Can they communicate with them? Are some pets better at this than others? What is my dog talking about with them, and do they know if she loves me as much as I love her?

The answers to the first three questions, I discovered, depended on a couple of things. First, whether the experts themselves believed in ghosts in the first place, and second, whether they would answer my emails. For example, there is one extremely famous dog trainer — let’s call him Geezer Gillan — whose team did not respond to my multiple requests for comment, across multiple platforms, even though I once saw with my own two eyes an episode of E!’s Hollywood Medium where he connected with one of his deceased dogs.

Oh well. Fortunately, Jackson Galaxy, a cat behavior and wellness expert, and the host of Animal Planet’s My Cat From Hell was willing to talk with me, and told me that he himself is a believer in the supernatural.

“Everybody has their leaning one way or another. I am a believer in the spirit world. I’ve had many experiences. And that colors my perception a little bit,” he said when we spoke over Zoom one afternoon. From just a purely evolutionary standpoint, he explains, cats have evolved to sense things that we, as humans, can’t. Their eyes can see perfectly with the smallest bit of light, they can hear six to eight times better than we can, and their whiskers are designed to detect everything from temperature changes to air current changes.

Does this mean that cats can see ghosts, though? Galaxy concedes that skeptics might argue that, if you catch your cat staring at an empty wall, it’s just because they happened to hear a mouse inside of it, or a piece of plaster fell, or something else happened that we didn’t sense but our cat did. But Galaxy believes it could be more. His own cats, he says, are always picking up energies in his house. “I start from a place of saying there’s no way we’re the only sentient beings in the universe. I think it’s hubris to think of us as the only beings in an inhabitable, spiritual, energetic world.” So, in other words: Maybe … ?

Energized by the tentative yes I got from an Animal Planet star, I decided to dig deeper into the question, and talk to someone who’s an expert in both pets and ghosts. But, when several pet psychics ignored my emails, I began to lose hope. Perhaps I would never know if Cleo was really seeing ghosts. Still, this uncertainty did not stop me from warning several friends with new puppies that if they ever caught their dogs staring into an empty corner, they’re probably locking eyes with a supernatural being. Yes, my information was unconfirmed, but best to keep them on their toes, I figured.

Then, Katherine Bozzi got back to me. Bozzi is an animal communicator who lives in British Columbia, and who uses meditation to communicate with animals who are both alive and dead. Bozzi, of course, believes animals can see spirits. (It would be unusual to find an animal communicator who didn’t, I suppose, but I can’t be sure because, as I mentioned before, so many of them ignored my emails.) She says horses are the best at connecting with ghosts, because they’re herd animals, so their bonds are very strong, and they’re very emotional. Still, a dog or a cat definitely could connect with a spirit as well, in her professional opinion. Animals in general are more open to experiencing spiritual connections than humans, she said, because they’re not culturally conditioned to dismiss these moments as pure imagination.

“We’re all sentient beings, and we’re all souls in a body on Earth at this moment,” she explained. “We can feel that connection if we’re open to it.”

Selfishly, though, I wanted to know more about dogs. What was my Cleo experiencing? I reached out to Grisha Stewart, a dog trainer, author, and speaker based in Oregon. Stewart told me that many people have shared with her stories about their animals seeming to pick up on something spiritual. In one spooky instance, a fellow trainer told her about a dog they had worked with who refused to go down into the basement of the family’s home. The trainer couldn’t coax the dog downstairs, and eventually, the family hired a medium to come cleanse and exorcise the energy in the basement. Immediately after, she says, the dog had no problem going down there.

“Things like that make me think,” says Stewart, who admits that she’s always looking for a more rational reason for unusual animal behavior. Ultimately, though, she believes that if thinking that your pets can see and connect with spirits is helpful to you, or gives you a sense of reassurance, then that’s great. Why not hold on to that?

“My husband died a year and a half ago,” Stewart told me in September. “One of the things that I did when my husband died was to deliberately suspend this disbelief in the idea that he could reach me, because I knew it would be soothing to me.”

Stewart recounted the story of one woman who reached out to her. The woman’s father had died, and she had taken over caring for his dog, and every once in a while, the dog would stand up and wag excitedly, like someone was in the room.

“I’m going to take that with a grain of salt and say, well maybe it was hearing the UPS truck, or some sound outside,” she says, before adding: “But it feels really good to say maybe that was [her father]. And who are we to say it wasn’t?”

Get the Cut newsletter delivered daily