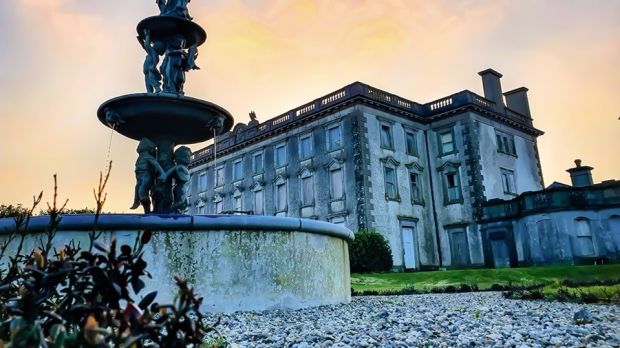 One of Ireland’s spookiest homes, a vast mansion with 97 windows that is said to have hosted the devil, is on the market at €2.5 million, having traded for some years as an after-dark tourist attraction with ghostly goings-on.

Loftus Hall, in Fethard on Sea, Wexford sits on 63 acres with direct access to the beach. It has 22 bedrooms and has accommodated film crews attracted by its spooky setting.

Its credits include the 2017 Gothic horror flick, The Lodgers, starring Spanish actress Charlotte Vega and Game of Thrones’ Eugene Simon, and paranormal broadcasts. At one stage the property was trending on Twitter, in 2015, for a Ghost Adventures Halloween special watched by 100 million in the States.

The Hall’s haunted reputation, dates back to 1766 and an earlier residence, Redmond Hall, on the same site. Lord Tottenham, who had married Anne Loftus lived there and this story concerns their daughter, also Anne.

There are many versions of the tale but, in short, it talks place on a dark and stormy night when a stranger came a-calling and he and Tottenham’s daughter, Lady Anne, spent hours playing cards together in the Tapestry Room.

During a game she is said to have bent down to retrieve a fallen card only to spy cloven hooves at the end of the stranger’s legs. She screamed prompting the stranger to disappear through the ceiling in a puff of smoke. Lady Anne never recovered and after her death the house became haunted.

There were sightings of the young woman and claims of poltergeist disturbances, so much so that its Protestant owners called in the local Catholic priest, Fr Thomas Broaders, a tenant on their estate, to perform an exorcism, according to the website Abandoned Ireland.

Fast forward a couple of hundred years and the Victorian mansion became a convent and then a hotel. In need of refurbishment, it came to market in 2008 asking around €1.7million but a subsequent sale fell through.

It reappeared on the market in 2011 at the substantially lower price of €625,000 when it was bought by its present owners, brothers Aidan and Shane Quigley, farmers and builders, whose family business,Neville Quigley Homes, built a slew of estates including College Gardens and Southern Gardens in Carlow town.

The house needed significant investment and Aidan did a diploma in the repair of historical structures and buildings at West Deal College of Arts and Conservation in the UK to better understand how to restore it. Now he says he was better off not knowing the extent of the works required before buying it.

“I wouldn’t have bought it. It was costly, time-consuming and unrewarding from a public point of view for much of the works remain invisible to the naked eye.”

Loftus Hall was built for John Henry Wellington Graham Loftus, the fourth Marquis of Ely, in 1870 and boasts plasterwork by James Hogan and Sons of Great Brunswick Street, now Pearse Street and an impressive oak staircase in the Jacobean style that is richly decorated with carving and marquetry and took the lion’s share of the €1.5million Quigley says he spent renovating the residence.

“It was about conserving a sense of dilapidation. It’s what the film crews and the public wanted.”

Most of the property’s 97 windows remain boarded up, for example. He claims to have spent a further €250,000 on the walled gardens.

Aidan spent the first six months sleeping in the house because he couldn’t get insurance for it and opened the property to the public offering tours of it and of the restored walled gardens as well as after-dark excursions where attendees hope to catch a glimpse of Lady Anne or the devil himself.

He roped in his kids to help out at the café, as tour guides and in starring roles in the scares before bedtime. His daughter Lia’s turn as a Communion-dress clad child that would appear to walk through walls has been Oscar-nomination worthy, he says, and had many of the €75 per head visitors blanching at the sight of her.

Whoever buys it will need deep pockets. To replace the windows could cost over €350,000 Quigley estimates while hotelier Francis Brennan, who visited the house for his RTÉ TV show At Your Service, put the overall renovation cost at €20 million.

And what to do about the pesky spectral squatters?

“While visitors may report a cold feeling in one or more of the rooms it is not until new owners take up residence that they are likely to manifest themselves,” explains the Rev David Pierpoint, archdeacon of Dublin, one of the country’s best-regarded exorcists, a practice he says is now called deliverance.

The Hook Head peninsula is one of Ireland’s most scenic spots and Loftus Hall is one of its two landmarks, the other being the 800-year old black and white striped Hook Lighthouse, Co Wexford’s most popular visitor attraction, which drew over 250,000 visitors last year,

Quigley has already moved on and hopes to have Loftus Lodge, a former mill in the village of Campile, open shortly offering eats and accommodation. He is selling the house privately, seeking €2.5million.