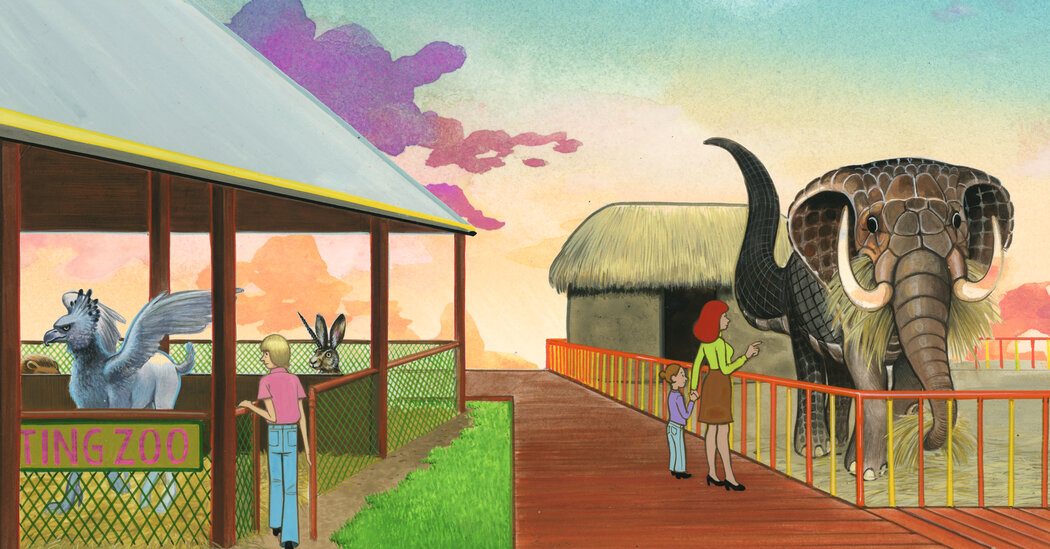 In one of the year’s most memorable openers, Matthew and Amber, a hippyish couple voiced by Michael Cera and Louisa Krause, make love under the stars, their naked, fleshy bodies enveloped by the blank, black space that is the forest around them. It’s an eerily enchanting scene flecked with droll humor that gives way to industrial menace when the duo stumble upon a towering chain link fence hiding something both wonderful and terrible: a whole wide world of unicorns, griffins, hydras — you name it.

Far from childish playthings, these mythical beings, or “cryptids,” bring our two dazed dreamers violently down to Earth.

Imbued with the polychromatic sensibility of 1960s animation like Heinz Edelmann’s work on “The Yellow Submarine,” “Cryptozoo,” the new feature directed by Dash Shaw, with animation directed by Jane Samborski, is a rapturously hallucinogenic daydream for mature audiences.

Especially valuable is the baku, a mystical pachyderm capable of sucking dreams — and nightmares — straight out of one’s head. Catastrophe is imminent should the beast fall into the wrong hands.

Opposite the “real” world in which cryptids are poached and trafficked is the titular cryptozoo, an amusement park and sanctuary intended to be a steppingstone toward a more integrated world. Here, cryptids of all kinds are commodified into tourist attractions — but at least they do not live in fear.

Phoebe (Angeliki Papoulia), a Medusa-like being who passes for human by tranquilizing the snakes atop her head and wrapping them in a head scarf, questions Lauren’s gradualist approach. An exoticized, refugee-like figure, she’s a too-familiar symbol of marginalization that magnifies the film’s schematic political commentary. Caught between an authoritarian state that hates them and a profit-driven liberal project that dehumanizes them, the cryptids are obviously better off fending for themselves. “Jurassic Park,” another film about failed utopias, comes to mind.

Yet “Cryptozoo” stands out as an aesthetically ambitious undertaking, seducing viewers with its hypnotizing hand-drawn animation and John Carroll Kirby’s pulsing electronic score. The story is interestingly windy enough, but it’s these otherworldly sounds and fluidly surreal, pastel-colored images that will leave you entranced.

Cryptozoo
Not Rated. Running time: 1 hour 35 minutes. In theaters and available to rent or buy on Apple TV, Google Play and other streaming platforms and pay TV operators.