Home Paranormal News The Brockmeier Variations: A Parade of Spectral Phenomena in “The Ghost Variations”... 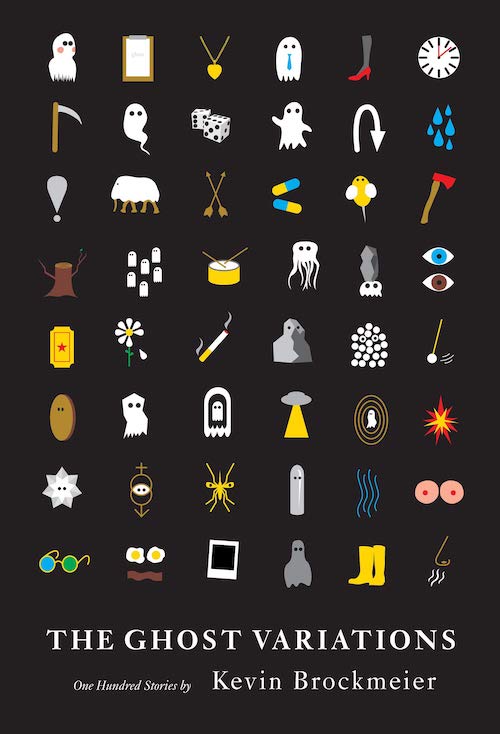 KEVIN BROCKMEIER HAS a knack for finding new ways to push past the reader’s expectations. Known for creating lush, mischievous tales that skirt the boundaries of narrative convention, Brockmeier’s pages are positively thrumming with stylistic cadences and luminous, yet economical visualizations that are more often akin to poetry than fiction.

There’s a distinct experimental contour to Brockmeier’s work. His rich imagination is inextricably linked to the anomalous structures he often favors for his books. But these features never deter his devotion to the emotional realities of his characters, even in the face of outlandish circumstances. Whether it’s a Coca-Cola-stoked pandemic that kills every human on Earth or an enormous glass ceiling falling slowly from the sky or pain made visible by rays of bright white light, Brockmeier’s empathic sensibilities remain the hands that pull the strings.

The fantastic elements of his narratives are exquisitely grounded, quickly capturing our attention in the first pages with a sense of intrigue and wonder that invites us to continue exploring these strange, yet strangely familiar, new worlds. Simply put, Brockmeier is a master of beginnings, and his new book is essentially a collection of intriguing openings.

The Ghost Variations is no ordinary story collection. It consists of 100 thematically organized ghost stories dished in bite-sized chunks. Each self-contained flash story runs two pages long, just enough for a single epiphanic moment. This feature effectively goads the reader to finish any given tale in one sitting, capitalizing on the enjoyment readers take in discovering where and how a story will end. This same feature, however, could also make it quite easy to put the book down after any given reading — not from lack of enjoyment, but from the quick sense of completion inherent in the format. But this criticism is more definitional than damning. The same allegation could be made about many other brilliant story collections (Ben Marcus’s The Age of Wire and String, Adam Ehrlich Sachs’s Inherited Disorders, or any of Lydia Davis’s story collections immediately come to mind), which is likely more an indication of a particular reader’s preference than any shortcoming of the author.

In contrast to the ghosts in Brockmeier’s 2006 novel, The Brief History of the Dead, the spectral beings in The Ghost Variations frequently traverse or inhabit the same spaces as the living — office buildings, grocery stores, a guidance counselor’s office, a broken escalator — creating an unexpectedly delightful synthesis of familiar and fantastic affairs. Paranormal manifestations also take on many different and unexpected forms. One moment, they appear as a “rain of ghosts” that falls from the sky (“Things That Fall from the Sky”), while another one crops up as the long-dead 27th letter of the alphabet — formerly located between K and L — which has been haunting the alphabet since the time of Cervantes (“The Ghost Letter”).

Not all ghosts, however, are created equal from one story to the next; they exist on a vast spectrum and often occupy vastly different existential planes. Some seem to evolve into superior beings, while others remain as bewildered by their fates as they were about their mundane circumstances in life. One such being is God Himself (“The Census”), who, in an effort to restore balance between the world’s real and imaginary beings, decides it best to become an imaginary being Himself. The ghost in “The Whirl of Time,” on the other hand, moves through time so quickly he can hardly choose a person or structure to haunt before they’ve passed out of the hauntable realm. And in “Wishes,” the spectral arrives in the form of a genie whose wishes must be spoken with perfect clarity to avoid risking certain calamity. “They were all the same, human beings,” the genie reflects, “or at least the ones who summoned him from his vessel were. They wanted so much and brought such terrible misfortune on themselves.” Most often, the paranormal beings face the same uncertainties, irritations, insecurities, misapprehensions, and philosophical puzzles as we do. Consequently, these ghost stories are not about ghosts but rather living, breathing people, albeit seen through a fantastical lens.

Playfulness and horror never venture too far apart in these tales. In “Playtime,” for example, a living girl who pursues her dog into the woods becomes trapped by a maze of ghostly tree shadows in a glade, where she awaits an unnamed, off-page horror. The ghosts in “Take It with Me” discover they can steal colors from the living world to brighten up their once grayscale afterlife, leaving the living world bereft of color. In “Mira Amsler,” Mira is bewildered to receive several embarrassing awards for her own death, which has not yet happened, at the 41st Annual Spirits’ Choice Awards.

One of the collection’s most comical features is the way it explores the bureaucratic sides of the afterlife, which are only too recognizably rife with unfortunate mishaps, oversights, and slips of the pen. “The Office of Hereafters and Dissolutions” follows a genial old man into the afterlife, where he is constantly hounded by a collections agency for a $25 entrance fee that he has already paid. In “There Are People, They Had Lives,” an overcrowded afterlife is expanded into first and second afterlives, and inhabitants of the second afterlife are drawn via lottery. In “Countless Strange Couplings and Separations,” a man is forced to leave the afterworld when it is discovered that he is, in fact, still alive, and he decides to file paperwork to appeal his expulsion.

One of my personal favorites in this collection, though only tangentially paranormal, seems to stand out as a commentary on Brockmeier’s own relationship to fiction. “The Abnormalist and the Usualist” offers a parable from the perspective of a Parablist who witnesses an ongoing feud between two professors of theoretical scripture: one an Abnormalist, the other a Usualist.

From his fiberglass chair in the hallway, the Center’s lone adjunct faculty member, a Parablist, who held that even the plainest fact was a story that proposed some alternate meaning, watched the two of them shouting and tangling their limbs together as they attempted to stand up. Inwardly he grinned, reflecting how, despite the inexhaustible quarrels of matter and spirit, life was harmonious and sweet, and the world something magnificent.

Much like the quarrels between these two staunch and immovable intellectuals, writerly discourse can too easily devolve into fruitless arguments about what fiction should or shouldn’t be. One might ask, “Is the realist or surrealist the more literary craftsman?” Brockmeier calls the dichotomy itself into question, offering a more generous perspective: what we insist upon focusing on in fiction, and perhaps in narrative in general, is often far too narrow.

In Brockmeier’s world, life and consciousness are the truly uncanny features of existence. With a stylized linguistic elegance, The Ghost Variations examines the indefinite nuances of our mortal transience. This parade of spectral phenomena exposes humankind’s propensity to cast itself in victimized roles, not realizing that the stage on which people perform is, in fact, situated within the theatre of the absurd.

Anyone intent on finding an overarching consciousness or metaphysics behind this great assemblage of ghosts may come up short. Some tales fix ghosts to people or places, while others are so liberated they are capable of dislodging themselves from time and existence itself. A risky approach, but in Brockmeier’s masterful hands the payoff is profound. His work radiates with the brazen assertion that no two beings are entirely alike or endowed with the same legalistic strictures. Make no mistake: this book is haunted, possessed by a plurality of minds that can be found within the author’s imagination, animated by a patient and finely attuned control of the written word that propels to the foreground of every story the beauty, delight, and fluidity of language itself.

From austere and sentimental to cerebral and cynical — and sometimes outright bizarre — the collection’s flash format highlights Brockmeier’s remarkable tonal and stylistic range. Like musical variations whereby material is repeated in altered form, with each literary variation Brockmeier sets out to alter not only the form of the ghost story but the form of his own vast stylistic capabilities.

Exploring the paranormal allows Brockmeier the space and angle to provide a rare, sometimes tragic, yet always gorgeous perspective on the world we inhabit. It is a work inextricably connected to death, as ghost stories are, but it is also festooned with vitality and color, the vast field of the unknown that somehow manages to spill over with beauty. Like his smirking Parablist, Brockmeier is content to let narrative tensions remain frayed and unresolved, leaving us to ponder the story’s ramifications — often imbued with a certain hopefulness — long after we’ve finished the book.

In this way, even when they don’t frighten, these ghost stories are nonetheless haunting. They introduce worlds beyond our present circumstances, inviting us to imagine the myriad possibilities that are nearer than we think, even if outside the realm of our immediate conceptions. This is the true gift of Brockmeier’s variations: he proves that conventional boundaries are not solid brick walls but are as permeable as a curtain blowing in an open window, accessible from either side through which the same winds have been coming and going all along.

Ryan Smernoff is a writer who has worked as an assistant editor at Henry Holt, Knopf, and Norton. He holds an MFA in Creative Writing from Columbia University.