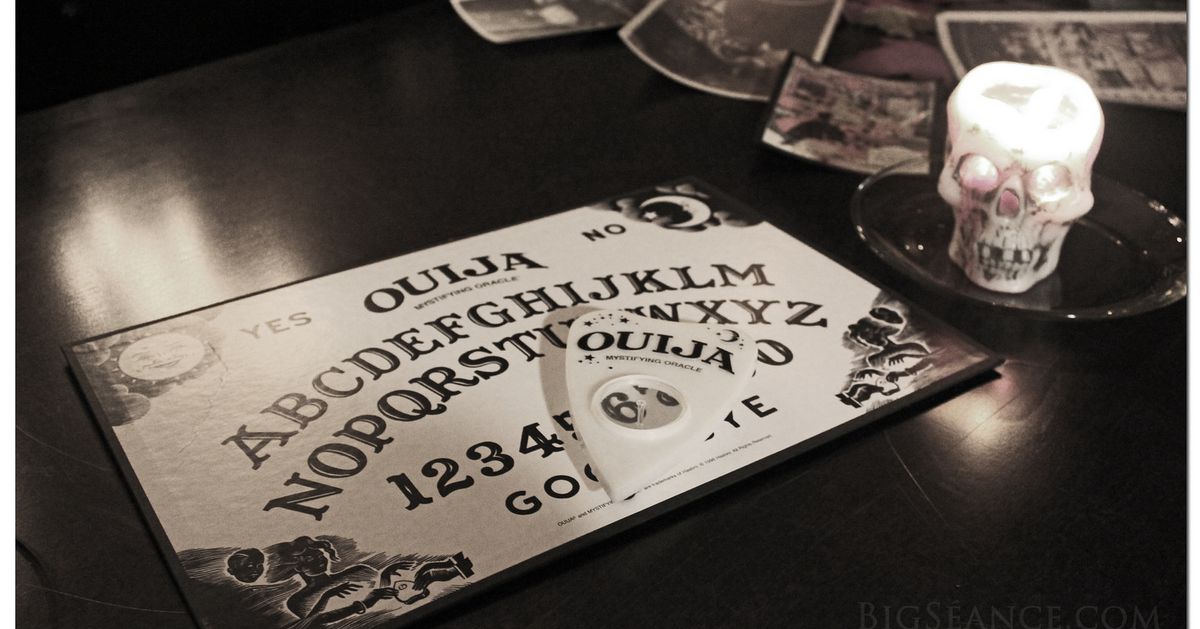 It’s that time of year again — the season when paranormal entities come out to play. But if you’re thinking about grabbing a Ouija board for your next conversation with the other side, you might want to think again.

Despite their long history as hoax spiritualist devices turned hit toys turned tools of the devil, Ouija boards won’t actually put you in contact with demons or spirits. Any scary firsthand reports you might hear or read of real-life Ouija board horror stories are exaggerations, false claims, or a misunderstanding of how Ouija boards actually work.

That might be disappointing news if you’re hosting a Halloween sleepover, but it might also leave you asking, “How do Ouija boards work?” The answer is surprisingly simple.

If you’ve never used a Ouija board, the concept is pretty straightforward. With a group or by yourself, you place your hands lightly on a triangular pointer called a planchette. The planchette rests on the board itself, which has the words “yes” and “no” in its top corners, an alphabet in the center, and the word “goodbye” at the bottom.

The idea is to summon the spirits you want to communicate with, and they’ll move the planchette around the board to spell out answers to the questions you ask — until they or you finally say goodbye and the spirits go back to wherever they came from.

It all sounds pretty harmless, but there’s a long tradition of people believing that Ouija boards are dangerous occult gateways that can lead to demon possession or worse. After all, what happens if it’s a non-friendly spirit that’s moving the planchette without your control?

In fact, there’s a simple scientific explanation: The mysterious mechanism that powers the Ouija board is called the ideomotor effect (pronounced “idio-mo-tor” or “id-ee-aah-meh-ter”), and it’s basically a way for your body to talk to itself.

The ideomotor effect is an example of unconscious, involuntary physical movement — that is, we move when we’re not trying to move. If you’ve ever experienced the sudden feeling of jerking awake from sleep (known as the hypnic jerk), you’ve experienced a more abrupt version of the ideomotor effect: your brain signaling your body to move without your conscious awareness. The obvious difference is that the ideomotor effect happens when you’re awake, so the reflexive movements you make are much smaller.

In the case of a Ouija board, your brain may unconsciously create images and memories when you ask the board questions. Your body responds to your brain without you consciously “telling” it to do so, causing the muscles in your hands and arms to move the pointer to the answers that you — again, unconsciously — may want to receive.

There are multiple scientific studies that have shown various instances of the ideomotor effect in action. In one well-known and oft-repeated variant of the Ouija board test, blindfolded participants spell much more incoherent messages. (You can try this one at home.)

These experiments easily demonstrate that the Ouija board only works when the participants are able to manipulate the pointer themselves. If a ghost or spirit were really in the room, it would be able to direct the planchette to spell out coherent messages without any assistance. But there is no ghost, and when the Ouija board users are deprived of their ability to spell out words they can see, the game rapidly devolves into gibberish.

Before Ouija boards were invented, spiritualists and other would-be ghost communicators used makeshift devices called “talking boards” that served a similar purpose. Talking boards first became popular in mid-19th-century America, when millions of people suddenly gained an interest in talking to the dead following the tremendous loss of life in the Civil War. The popularity of talking boards, and their use as a tool to exploit grieving war families, meant scientists actually started studying the ideomotor effect in the midcentury, well before Ouija boards and planchettes were patented in 1890.

Over the years, research has determined that the ideomotor effect is closely tied to subconscious awareness — and that its effect is maximized when the subject believes he has no control of his movements. Paradoxically, the less control you think you have, the more control your subconscious mind is actually exerting.

The effect might also make the Ouija board an effective tool to help you tap into your own subconscious. In one study published in 2012, scientists found that using the Ouija board allowed subjects to recall factual information with more accuracy than if they weren’t using the board. Participants were instructed to answer a series of yes/no questions and to rate whether they were confident in their answers or merely guessing. Later, they were subjected to another round of questions but used a Ouija board to indicate “yes” or “no,” once again rating their confidence level in their answers. In cases where participants believed they didn’t know an answer, they were able to give more correct answers, more often, when using the Ouija board than when they believed they were only guessing on their own.

The researchers behind that study have gone on to speculate that using the Ouija board as a technique to unlock subconscious knowledge could lead to insights about the early onset of Alzheimer’s and other neurodegenerative diseases.

In other words, the Ouija board is potentially a very powerful communication tool — just not in the way most people think.

This real physical effect causes some people to believe that seemingly miraculous or paranormal phenomena are behind certain behaviors and occurrences. It’s a common element of demon possession hoaxes, since witnesses come to believe the “possessed” person is moving without her own control. It can also convince people they have the gift of automatic writing, meaning they insist that spirits can communicate with the living through their “uncontrolled” handwriting. Often, the ideomotor effect is used to defraud people who visit exorcists, psychics, mediums, and other self-proclaimed spirit-channeling types — sometimes leading to severe financial, physical, and psychological harm.

Dowsing is another example of the ideomotor effect being exploited for financial gain. The practice, whose stated purpose is to divine water or other things located underground or concealed within something else, involves holding a special device (like a dowsing rod or a divining rod) and letting the ideomoter effect cause your hand to “mysteriously” point to the location of the desired object or substance. These devices have been scientifically tested and debunked again and again, but that hasn’t stopped their purveyors from falsely claiming they can detect everything from gold to liver disease and hepatitis to “harmful earth radiations.” In 2013, one charlatan was convicted of selling nearly $70 million in fake bomb detectors to Iraqi police.

Finally, the ideomotor effect lies behind a controversial, repeatedly debunked form of pseudoscience therapy called “facilitated communication,” which emerged as a popular therapy technique in the 1990s. Facilitated communication claims to work by allowing disabled or autistic patients to “communicate” through slight finger movements. In reality, science has proven many times over that the patients’ movements are caused by the ideomoter effect, and that their caregivers are reading meaning into nothing. One scientist even referred to facilitated communication as “Ouija board stuff.”

The disastrous effects of this fake therapy include a sex abuse case in which the caregiver claimed she used facilitated communication to obtain consent from her patient, and a devastating parental custody case where manipulative caregivers used it to suggest that the children involved had “accused” their parents of abuse. Sadly, it still exists today as a fraudulent speech therapy technique used with autism patients, disguised under various names like “rapid prompting method,” “supported typing,” or “progressive kinesthetic feedback.”

Ironically, the same factor lies at the heart of both the cause and the effects of the ideomotor phenomenon: We want to believe. Our desire to confirm the existence of ghosts, spirits, and other improbable possibilities is what convinces Ouija board users, facilitated communication proponents, and anyone else who encounters the ideomotor effect in action that they’ve experienced something real: a real visitation from another dimension, some sort of mystical sign, or an indication that a patient trapped in his own mind is suddenly able to break free and communicate.

But the marvelous thing about a Ouija board isn’t what a planchette might read or a psychic might claim the spirits are saying through it from the other side. In reality, the true wonder of the Ouija board is what lies within our own subconscious.