Home Paranormal News The Skirvin: The US’ most haunted hotel? – BBC News 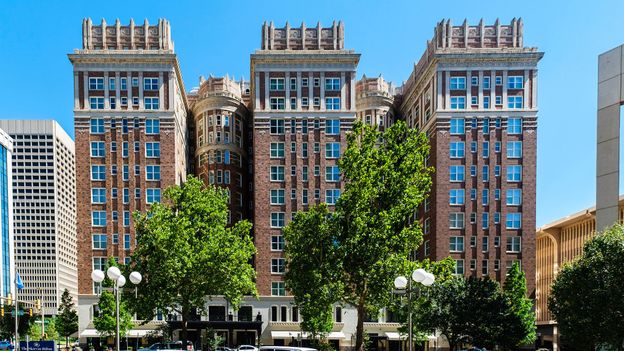 “Seat”, appeared on the Ghost Hunting Tools screen. McCoy, using GhostTube SLS, showed the stick-figure outline of a tall figure seated on the jade-green chairs in front of the lift. McCoy said it was a man in his late 20s named Charles who was a contractor downtown pre-1950. She told me she felt a pain at the back of her head – often, she explained, ghosts will want to indicate to the living how they died.

Back down the hallway, we passed another cold spot in a slightly different location. I felt a shiver, and goosebumps again appeared on McCoy’s arm. “It’s coming from 813,” she said, pointing to the door in front of us.

“Pen” appeared on the app. Lowering my pen from my notebook, I then became sufficiently uneasy and decided I’d had enough.

McCoy handed me a small perfume sample-sized glass container of protection potion – an olive oil base with a hodgepodge of herbs.

“Your own shield in a vial,” she said.

That night, I kept a watchful vigil over my wife and daughter – the neon glow of the nightstand alarm clock throwing eerie shadows around our room as I stayed alert for signs of Charles and, yes, Effie.

If you liked this story, sign up for the weekly bbc.com features newsletter called “The Essential List”. A handpicked selection of stories from BBC Future, Culture, Worklife and Travel, delivered to your inbox every Friday.