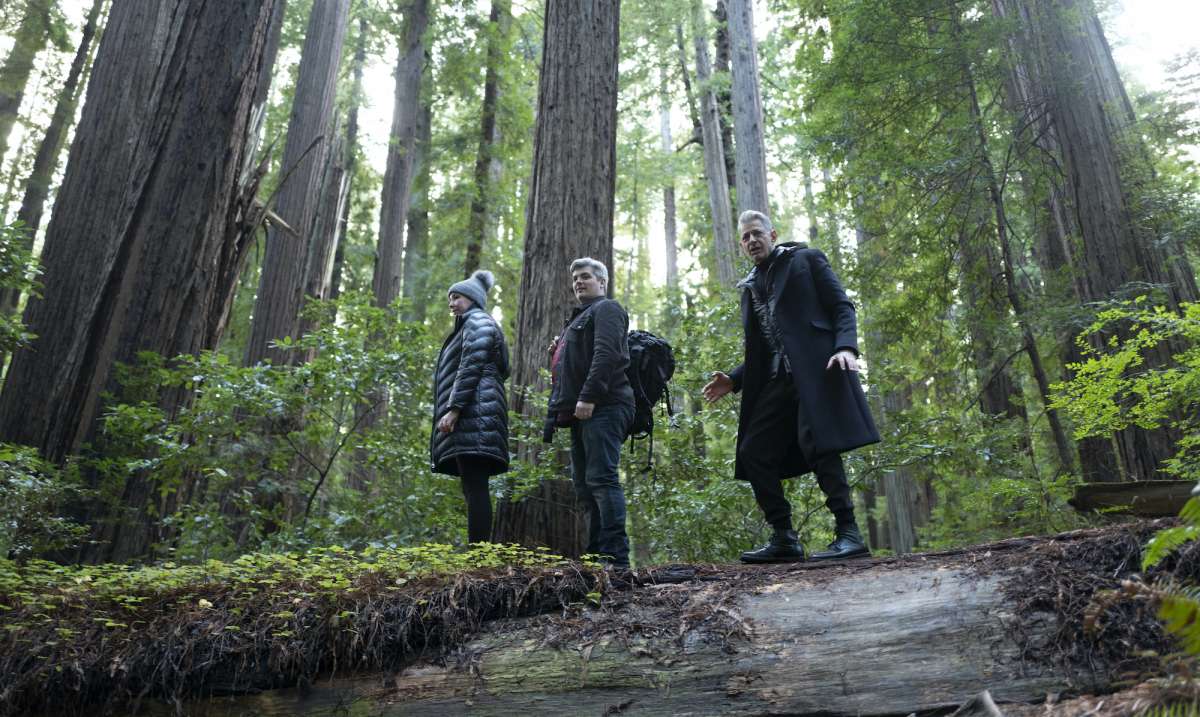 Not Bigfoot. He and his wife Dana, professional paranormal investigators, have spent countless hours in the woods searching for the mythic Sasquatch in their careers. What he couldn’t believe was that Jeff Goldblum, the multi-hyphenate renaissance man who’s experiencing a late-career renaissance of his own, was asking for the Newkirks to take him Bigfoot hunting for his Disney Plus show.

On “The World According to Jeff Goldblum,” the actor takes a deep dive into one seemingly familiar topic for each episode. On the first season, which aired in late 2019 and early 2020 and earned an Emmy nomination for outstanding hosted nonfiction series, the actor explored things like tattoos, sneakers and ice cream. For season two, the first five episodes of which drop today on Disney Plus, he’s exploring topics like fireworks, magic and — this is where the Newkirks come in — monsters.

“At first glance, no matter what, most people always think the existence of Bigfoot is weird and strange,” Greg Newkirk said, “but the more you actually dig into Bigfoot and the legends and experiences that people had, you realize that Bigfoot is much weirder than you initially thought.”

The thing is, the Newkirks aren’t traditional Bigfoot hunters like the cryptozoologists (those who study legendary animals like the Loch Ness Monster and the Yeti) who appear on shows like “Expedition Bigfoot,” traversing the woods looking for physical evidence of cryptids.

“We can’t track animals,” Greg Newkirk said. “I’m not going to pick up scat and tell you what it belongs to.”

“We can’t put our finger in the air and tell which direction the wind is going,” Dana Newkirk added. “There are a lot of weirder directions we take when it comes to Bigfoot.”

But as you might expect from Jeff Goldblum, weirder is better, even when it comes to very weird subjects. It turns out he asked for them specifically, as a producer told the Newkirks, because “he wants to hang out with people he thinks are fun.”

In a (what some might call pseudoscientific) field saturated with ghost hunters, UFOlogists and cryptozoologists, the Newkirks have carved a niche for themselves by taking a multidisciplinary approach and looking at the areas where these strange phenomena overlap.

In ghost encounters, people often report lost time, seeing strange lights, getting tingling sensations — which are all things that some people who claim to have encountered Bigfoot also say they’ve experienced.

That doesn’t mean, though, that they’ll stop looking. So Greg and Dana packed up their car with some artifacts from their Traveling Museum of the Paranormal and Occult, like casts of Bigfoot footprints and “Bigfoot pheromones,” and headed to the woods to teach Dr. Ian Malcom himself how to search for a being that, if it’s real at all, is particularly adept at avoiding being found.

Where they went, of course, was Mount Shasta.

“Originally they were looking for a place with Bigfoot sightings in Southern California. And we were like, ‘Sorry to say, there’s not a whole lot of those down south,’” Greg Newkirk said. “We actually had to convince them to go up to Northern California, in Humboldt County, because that’s the birthplace of most of the modern Bigfoot legends.”

Bigfoot legends are so pervasive in Humboldt County that there’s even an “Intro to Bigfoot Studies” class at Humboldt State University, and the fabled creature has been accused of murdering people there.

But it turns out, that area of Northern California isn’t just famous for Bigfoot — it’s also where parts of “The Lost World: Jurassic Park” was filmed.

“They had us sitting in the woods on this fallen redwood tree,” Greg said. “We see some rustling in the distance and there’s a camera crew. And then we see this just tall tan creature, literally this mythical creature comes out of the woods.”

“[Jeff] walks up impeccably dressed, and he puts his fingers to his temples and he goes, ‘You, you’re Greg Newkirk and you, you’re Dana Newkirk,’” Greg continued. “I could barely talk because I was so entranced. And I even said to him, ‘You have to understand, this is about as incredible as us actually finding Bigfoot.’ He’s equally legendary.”

The Newkirks spent two days exploring the woods with Goldblum looking for Bigfoot, using techniques like knocking on trees — knocks in the woods are commonly reported with Bigfoot encounters — and using those pheromones, which the Newkirks say smell worse than you can possibly imagine.

“We gave him a real strong whiff,” Greg said, “and he almost fell over.”

According to the Newkirks, Goldblum maintained an open mind about Sasquatch, and all the other “weirdness,” as they call it, they threw his way.

“[Goldblum] had so many questions and he just was incredible,” Greg said. “We sat and shared ghost stories with him around a campfire. He held our haunted objects from the museum. He asked questions about them. He told us all of these stories about his life. He was unbelievable.”

“He has the best sense of humor,” Dana added, “and also weirdly humble and curious. It’s infectious. He has a very fun, ready-to-embrace-all-things attitude.”

While the Newkirks won’t reveal what happened in the episode, they did give some insight into how the actor reacted to their strange passion.

“I think what we found was why Bigfoot is important,” Greg said. “Things like Bigfoot teach us to maintain a curiosity about a world that is becoming increasingly more mundane. When we can get creative about it, when we can imagine monsters and we can chase monsters, it gets us out into the world that we feel like we know back and forth already.”

“And so I think he saw some of that in us and was like, ‘Oh, OK, I get this. This is, this is fun. This is valuable. We’re learning about ourselves,’” Dana said.

“I think Jeff felt the same way we did after the adventure,” Greg added. “He asked if he could be an honorary Newkirk. So we’ll take it. We’ll see if he’ll come for Thanksgiving.”