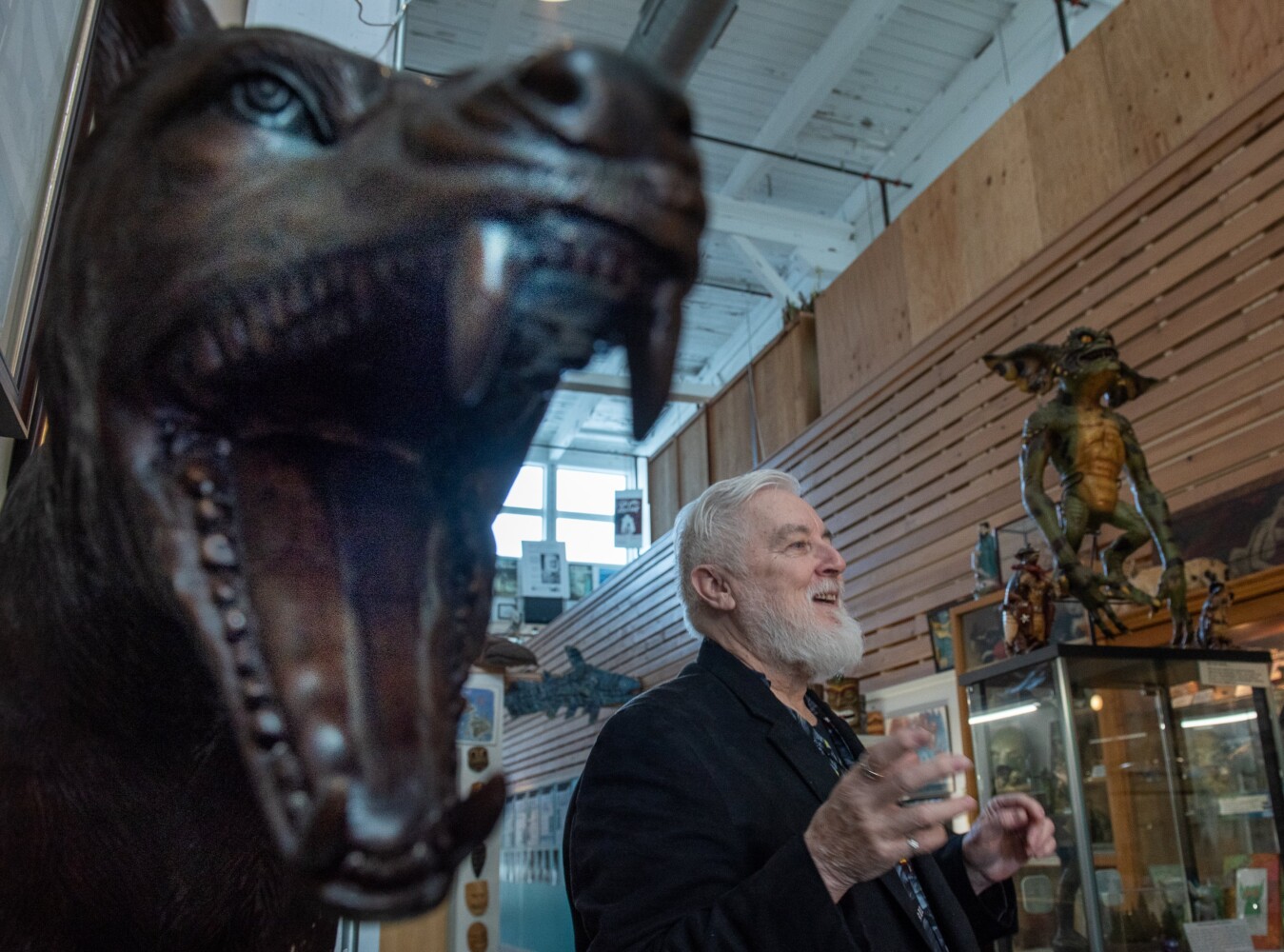 International Cryptozoology Museum Director Loren Coleman talks about the museum during a recent tour of the museum in Portland. Russ Dillingham/Sun Journal

Toys and movie memorabilia, including this from the movie “Gremlins,” are found throughout the museum. Russ Dillingham/Sun Journal

Abominable snowpeople will get their own section. Lake monsters, too, obviously.

Ditto for werewolves and dogmen, eventually.

Loren Coleman has moved his hefty collection of 100,000 books — on as-yet-discovered creatures, natural history, parapsychology, ufology and more — up to Bangor, future home of the International Cryptozoology Museum Bookstore. He has an attached archive set aside for scholars and fellow cryptozoologists, and a 10-year plan to build a new museum that’s 10 times the size of his popular tourist destination at Thompson’s Point in Portland.

While the new bookstore and archive are opening this spring, there’s still years left to enjoy the original International Cryptozoology Museum, where the famous Patterson-Gimlin footage plays on a loop and every inch is filled with plaster casts, pop art, sculptures and stories of witness sightings of cryptids too numerous to count.

The star at Thompson’s Point is the 8.5-foot-tall Crookston Bigfoot, massive, crafted out of two musk oxen hides — a must-have photo op.

The star in Bangor when the new museum is built might just be a 9-foot-tall papier-mache Wendigo created by members of the Penobscot band from Indian Island.

But first, there’s that volume of volumes to organize and shelve.

“It’s just unbelievable to think what 100,000 books looks like,” said Coleman, 74. “When I started in 1960, I went to the librarians and said, ‘Do you have any books on cryptozoology?’ The word wasn’t even being used back then. I joke with some of my friends, ‘Well, I hadn’t even written any yet, so there weren’t many in the library.’”

His interest was piqued young — Coleman’s sixth-grade teacher helped him land his first artifact, a flag from the 1960 abominable snowmen expedition led by Sir Edmund Hillary — and he opened his International Cryptozoology Museum in August 2003.

A section of the museum is dedicated to the Beast of Bray Road, a wolf- or bear-like creature allegedly witnessed in 1936 in Elkhorn, Wisconsin. Russ Dillingham/Sun Journal

Coleman bought an oversized house in a Portland neighborhood so he could live on top and fill the first floor with all manner of plaster Bigfoot casts, books, artwork and skulls. It was open by appointment and popular with film crews, from “Weird Travels” to “Monsterquest,” eager to interview Coleman about lake monsters, sea monsters, swamp monsters, mutant canines or Bigfoot, to name a few.

By 2009, the museum was off to Congress Street. Two years later, larger quarters still on Avon Street.

This winter, it was featured on AAA’s “Unique Museums of the Northeast,” in the BBC’s “Five of the world’s most unusual museums” and recommended as the first stop on Atlas Obscura’s “The Great American Bigfoot Tour.”

Exhibits rotate in and out for space. Right now, you’ll find the entrance laid out with Chris Murphy’s “Sasquatch Revealed” exhibit, which traveled the country before finding a home at the museum.

“One thing that’s happened — in the beginning when all of this became the museum, it was all my artifacts. Since that time, we’re getting rather large figures or artifacts or replicas,” Coleman said. “We sponsored an expedition looking for the giant salamander over the summer, in California. I commissioned a 6-foot-long bronze giant salamander to go in the middle of the museum in Portland, along with the different material that we’ve got pursing that quest.”

The expedition used traditional and underwater drones, and didn’t find the six-footer rumored since the 1920s, “but they got some new lore and new eyewitness accounts, so that was exciting,” he said.

A rendering of the Dover Demon is on display at the museum. Three teenagers in Dover, Massachusetts, say they saw the large-eyed creature “with tendril-like fingers” in 1977. Russ Dillingham/Sun Journal

Look for that exhibit later this fall.

Laid out on two floors, the downstairs at Thompson’s Point is filled with cabinets celebrating the Loch Ness Monster, Dogmen, dinosaurs that maybe didn’t die out and even “crypto-brewoology”: a collection of Sasquatch Stout, Snallygaster blended whiskey, dark lager from Lake Monster Brewing and other spirits.

Upstairs, it’s lots of Bigfoot and a little Coleman, with memorabilia from his long career and many appearances, including, as of last month, a one-off custom action figure by artist Charlie D. Perez.

“One thing that I’ve learned since I started this in 2003, which seems to me like yesterday, looking at the long-haul, is that now I’m seeing museums — Bigfoot museums, Mothman museums — popping up all over the country,” Coleman said. “Now that our museum is almost 20 years old, now I’m the consultant around the world to tell people how to do it.”

And if someone else tries to open an international cryptid museum, like the person he’s advising in Germany?

“I will always be able to say that we were the first,” he said. “Maine is always the first, right?”

His Maine plans for now include opening the bookstore and archive at 585 Hammond St. in Bangor, which will also feature some small exhibits, as well as moving there with his wife, Jenny, a member of the museum’s board, and eventually plotting that new monster-sized museum.

One of the prized displays at the museum is an early collection of Bigfoot artifacts. Russ Dillingham/Sun Journal

“Space is cheaper, and there’s a lot more of it, in Bangor, so the long-term idea is to create a museum from the ground up in Bangor,” he said. “We can have more space and really combine archives, office space and a huge amount of exhibition space. Whether or not I’m still alive is an unknown, but because it’s a nonprofit, and 501c3, and I have staff that are in training, I really see a long-term vision, a dream that will live on. My legacy will live on beyond me because I’m setting it up that way.”

He’ll have 100 of his own books in the archive underway, 40 he’s written and 60 more he wrote chapters or introductions for. Two more are due out this year, one of them being “a real survey of mermaids and mermen all across the world,” with the late Mark Hall.

(Access to the archive will be mostly limited to researchers; it won’t be open to the general public.)

One of hundreds of posters and signs at the museum. Russ Dillingham/Sun Journal

Coleman anticipates taking a hands-on role in Bangor, so fans of beastly mysteries dropping by for a Rougarou or Pukwudgie T-shirt, or a deck of Bigfoot playing cards during a bookstore visit, might luck into finding him there.

Active in the field for more than 50 years, he’s been called the “Godfather of Cryptozoology” and the “world’s leading, living cryptozoologist” by convention promoters.

“That, and ‘legend,’” Coleman said. “I always joke with these people who do that, ‘As long as you put the word ‘living’ in front of that . . .’ I never thought I would be an ‘elder statesman,’ elder cryptozoologist. It’s all part of the game.”

He gets the sense that some people visiting the museum are tourists looking for something strange. Some are interested in mystery or nature. Some, but not many, want to come in and scoff.

“I’ve found through almost seven decades now that cryptozoology is a gateway science,” Coleman said. “One mother that came in, she said, ‘I’m really worried about Johnny. I think he’s going to grow up and ruin his life because he’s interested in cryptozoology.’ I said, ‘No, don’t worry, don’t worry. He might grow up and become an engineer.’”