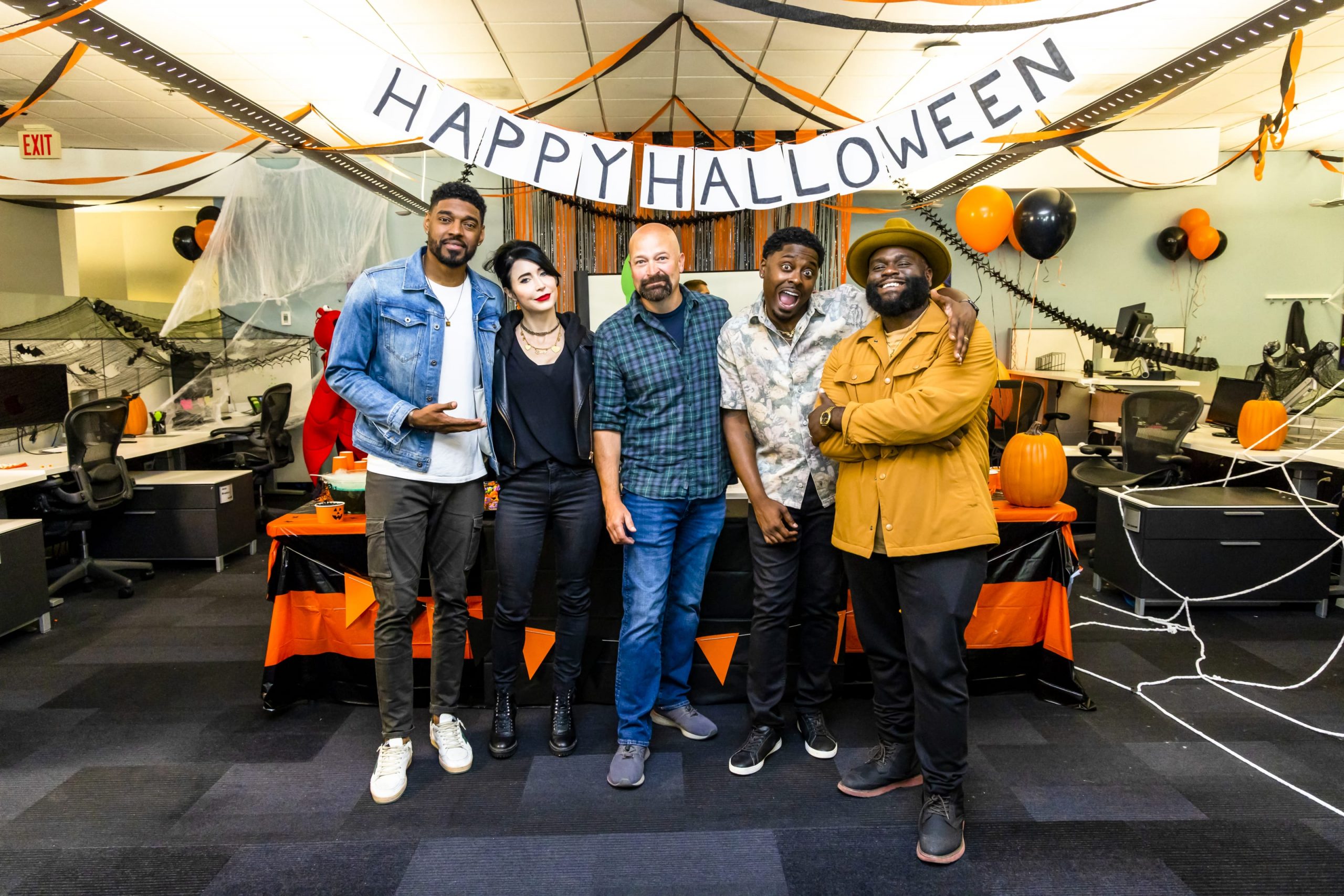 Next up: the lineup of paranormal shows available on Travel Channel. Keep in mind, the premiere date for each show is also the date it will be available on discovery+.

Ghosts of Devil’s Perch is the first Ghostober offering, and it begins Sunday, August 21 at 9:00 p.m. ET. Butte, Montana is known as “The Devil’s Perch”, and the sheriff and mayor of the old mining town enlisted paranormal investigator Dave Schrader, tech expert K.D. Stafford and psychic medium Cindy Kaza to try and contain the paranormal activity that keeps getting stirred up. During the eight-episode series, the team explores different areas of Butte.

Paranormal Caught on Camera premieres Sunday, Sept. 11, 10:00 p.m. ET. Viewers can watch frightening paranormal videos as a group of experts also view them in an effort to analyze what is actually going on. This series will run for 13 episodes, each at one hour long. 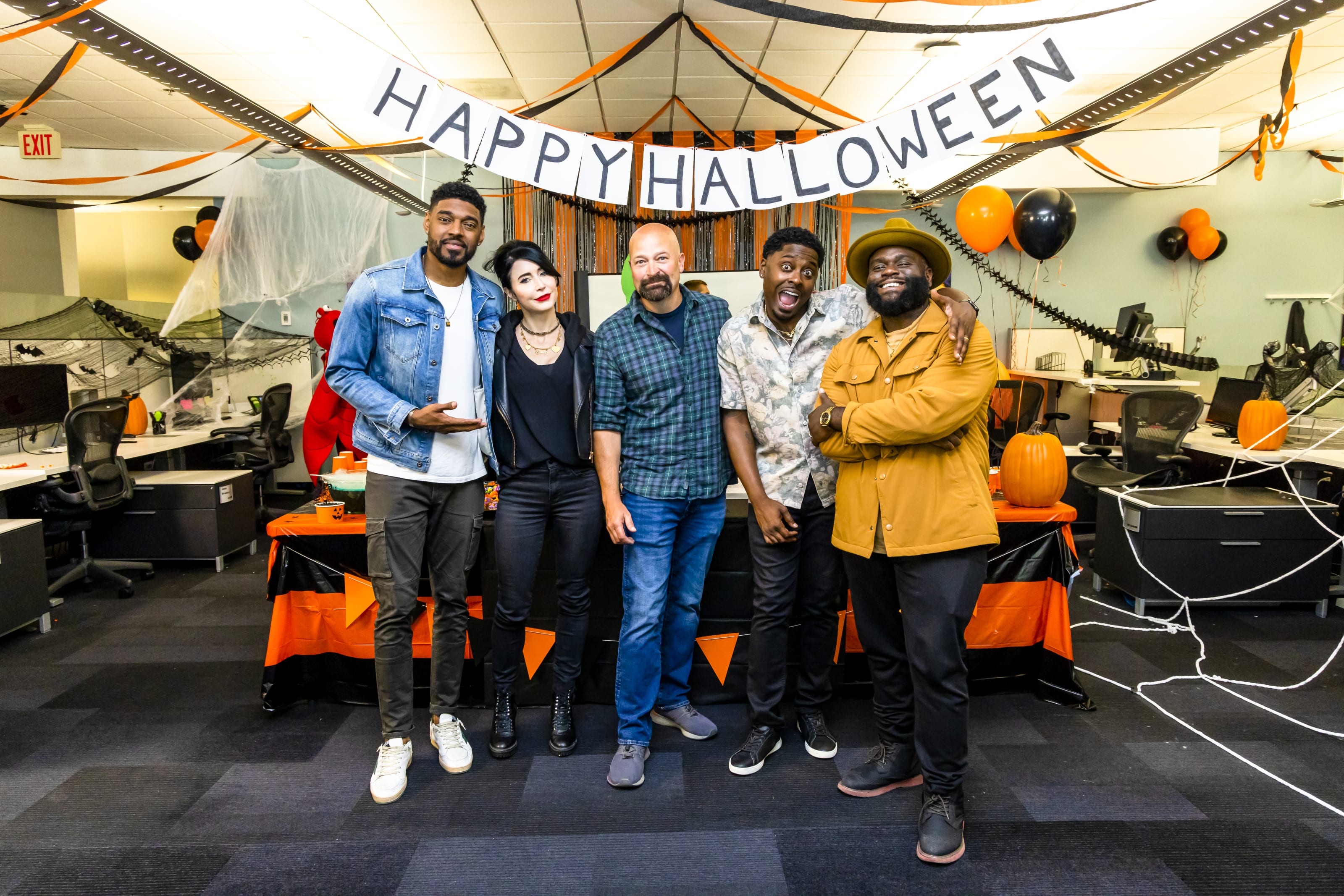 The Ghostober Preview Party starts September 12 at 10:00 p.m. ET. Join the Ghost Brothers, Cindy Kaza (Ghosts of Devil’s Perch) and Jason Hawes (Ghost Hunters) as they throw a good old-fashioned office Halloween party. The trio will give us sneak peeks of the Ghostober lineup for 2022.

Ghost Adventures’ new season begins September 15 at 10:00 p.m. ET. Zak, Aaron, Billy and Jay are back, and once again they travel to multiple haunted locations. At each destination, they talk to the locals, to eyewitnesses and various experts in an effort to put together the paranormal puzzles. Ghost Adventures will consist of nine one-hour episodes.

Next up, Ghostober welcomes a new 10-episode series. Haunted Scotland begins streaming on discovery+ Friday, September 23 with a three-episode binge. American medium Chris Fleming and Gail Porter of Scotland join together to lead a paranormal team through the investigation of horrific crimes, scary stories and sightings of the supernatural kind. All of these events took place in one of the world’s most haunted countries, Scotland.

Ghost Adventures is back with a new special debuting on Thursday, September 29, 9:00 p.m. ET. Ghost Adventure’s: Devil’s Den invites us to join along as the GA team conducts an investigation at Downey, California’s shuttered Los Padrinos Juvenile Detention Center, AKA “The Devil’s Den.” This two-hour special sees the team explore beyond the barbed wire to find out what exactly is going on. 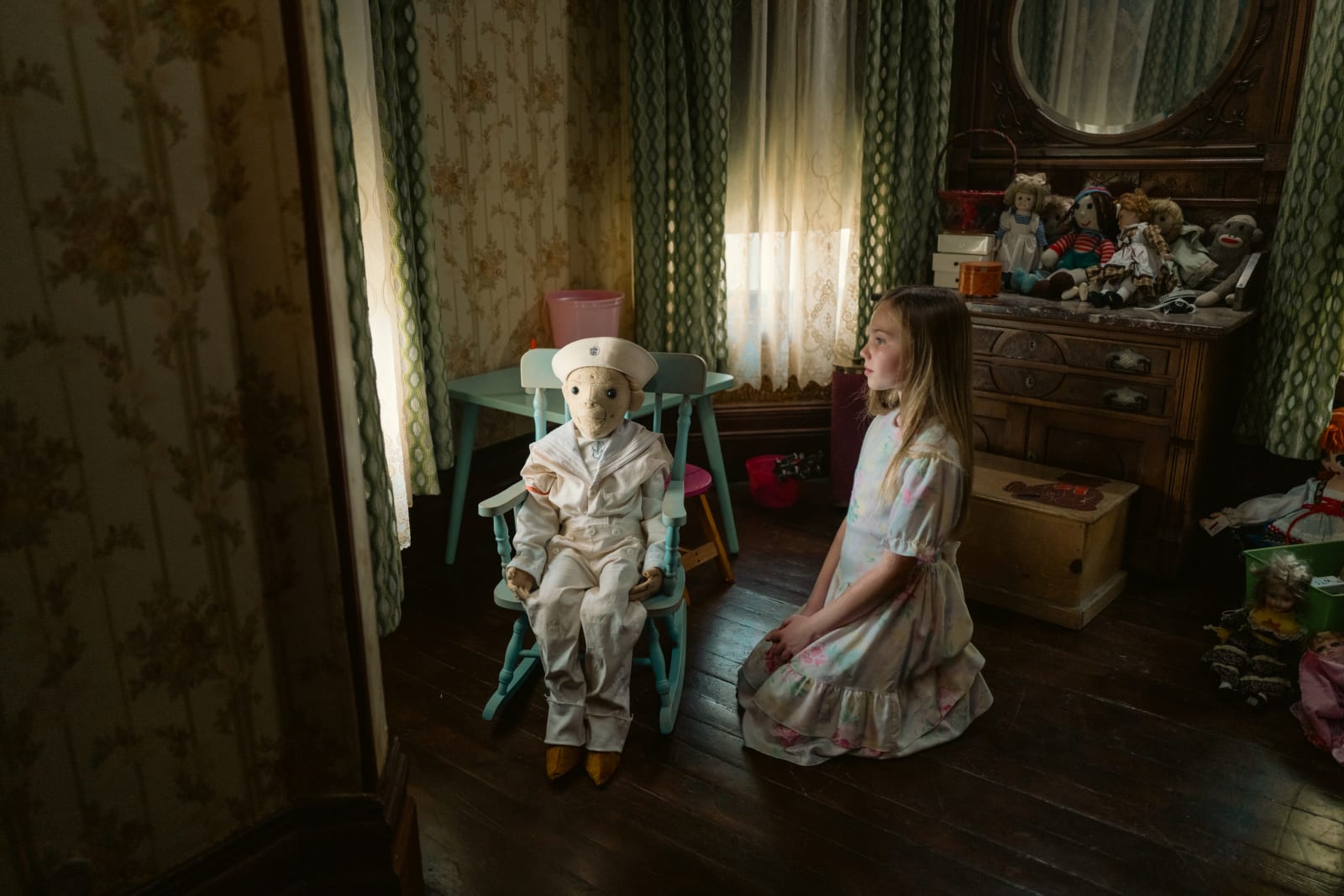 Shock Doc – The Curse of Robert the Doll premieres Friday, September 30 at 8:00 p.m. ET. Most followers of the paranormal are familiar with the tale of Robert the Doll, who currently resides in a glass case in a Key West museum. The legend says that you will find yourself cursed if you do not follow Robert’s very specific rules (visitors are instructed to introduce themselves to Robert, to ask permission before taking a photo, and to say goodbye before leaving), and those who do not, suffer the consequences. This two-hour Shock Doc special takes a look at the back story of Robert the Doll in an effort to find out why he is thought to be so nefarious.

Eli Roth is back on Travel Channel for Ghostober, this time with a new series called Eli Roth Presents: My Possessed Pet. The four-episode season begins on Friday, September 30, 10:00 p.m. ET, and will explore the true tales of people who insist their family pet has been cursed, haunted or possessed.

TAPS returns with a new season of Ghost Hunters starting Saturday, October 1 at 9:00 p.m. ET. Original Ghost Hunters Jason, Steve and Tango, along with Shari DeBenedetti return to revisit their scariest cases, as well as investigating new cases of hauntings. Aided by state-of-the-art technology and some special guest investigators, the team will face frightening paranormal activity in their usual manner, hoping to either validate or debunk each case.

Jack Osbourne’s Haunted Homecoming begins streaming on discovery+ Sunday, October 2. In this new series, Jack returns to the UK to his childhood home in Buckinghamshire, where he had multiple experiences as a child. While there, he visits not only the family home, but also an old pub, a local theater and notoriously haunted Missenden Abbey. The series consists of three one-hour episodes. 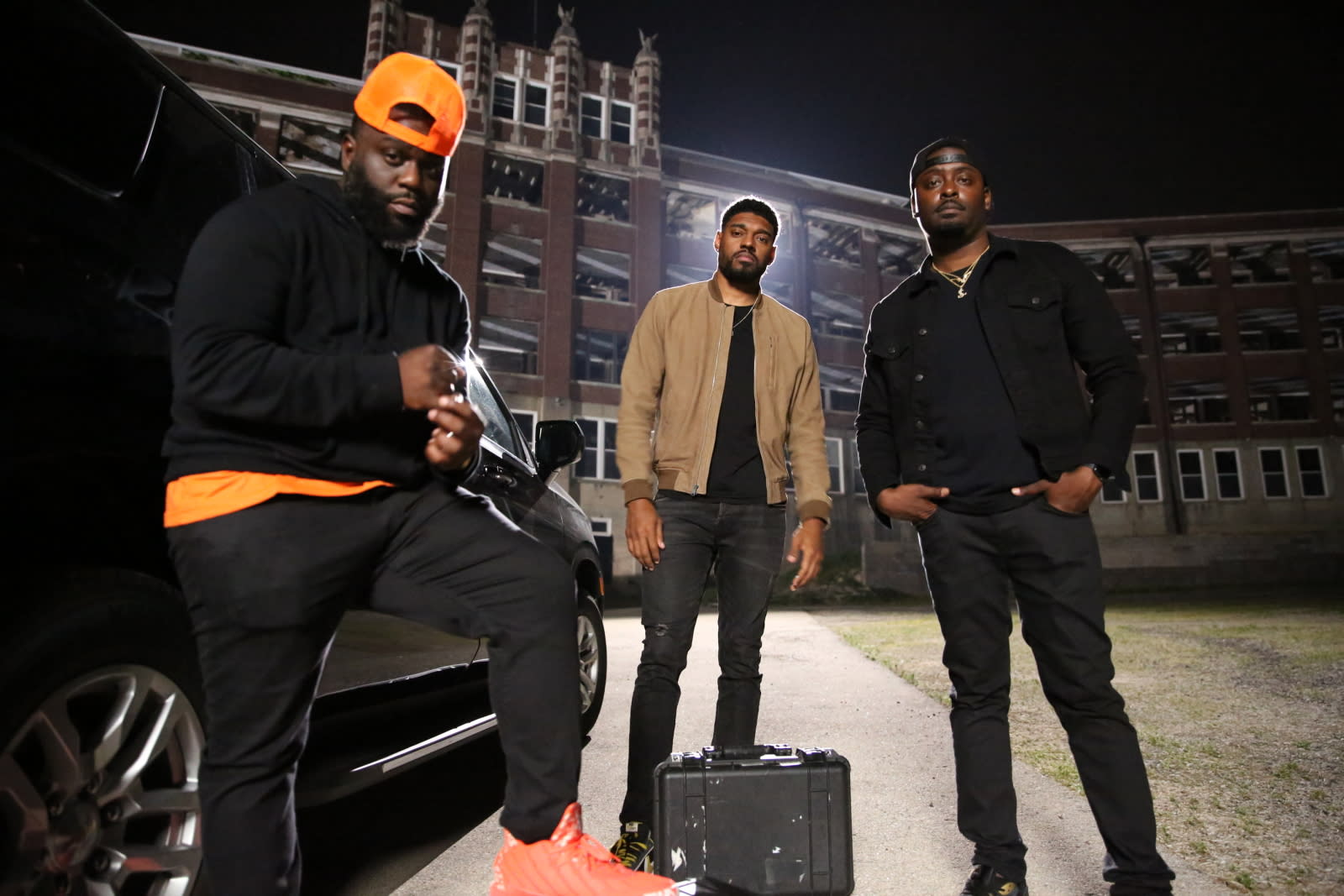 Hero shot of The Ghost Brothers Marcus Harvey, Juwan Mass & Dalen Spratt in front of the location for the investigation at the Waverly Hills Sanatorium in Louisville, KY as seen on Travel Channel.

Ghost Brothers: Lights Out begins its new season with a three-episode binge on discovery+ beginning Friday, October 7. The Ghost Brothers set out on a ghost-hunting mission to find out if the scary stories are true, while conducting unconventional experiments to dig into the truth. The season will include eight on-hour episodes.

Shock Doc – Ghosts of Flight 401 is a new two-hour special premiering Friday, October 28 at 8:00 p.m. ET. In December of 1972, Eastern Airlines Flight 401 crashed in the Everglades in Florida. Over 100 people lost their lives, and it is said that their ghosts soon began to haunt the area, and even other airplanes. On the 50th anniversary of the crash, paranormal investigator Steve Shippy is joined by psychic medium Cindy Kaza as the two attempt to contact the lost souls of Flight 401.

Eli Roth’s new series Urban Legend makes its debut on Friday, October 28 at 10:00 p.m. ET. This anthology series explores classic urban legends in the style of a “mini-horror film.” Each tale is supposed to be true, but of course, as is usually the case where urban legends are concerned, the stories always happened to a friend of a friend.

The Haunted Museum: 3 Ring Inferno is a two-hour special premiering on Halloween night at 9:00 p.m. ET. The special is produced by Ghost Adventures’ Zak Bagans in collaboration with Eli Roth. For those who have not watched The Haunted Museum, it’s a film anthology series that tells terrifying stories inspired by the haunted objects on display in Bagans’ Las Vegas museum. In this Ghostober special, we will watch the tale of a boy and his father who make the mistake of stealing an antique suitcase that contains an old tent. The tent takes the two into a frightening circus from the past, where they encounter a being that wants their very souls.

Next: Ghostober: All of the Halloween shows coming to Food Network

Do you like to watch the Halloween shows on Food Network? Tell us what you think about the new additions to the schedule by using the comments section.