THIS is the moment a “ghost” was captured walking across a road yesterday – but it has left Irish people divided.

The eerie CCTV footage appears to show a translucent figure strolling on Dublin‘s Temple Street – near the children’s hospital – before quickly vanishing on Wednesday morning.

The spooky clip was shared on social media and has since gone viral.

Ryan Graydon posted the clip on Facebook and said: “What the actual f*** Temple Street this morn.”

And a number of people took to the comments and said they can see the outline of a person too.

One said: “Paranormal caught on camera.” 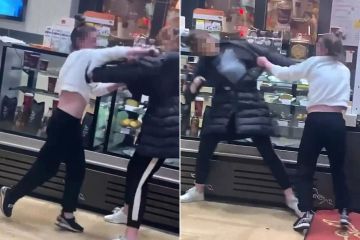 Someone else wrote: “Whoever it is may the soul RIP.”

While other social media users reckon it’s a reflection of a silver balloon.

One said: “Guys it’s the reflection of a silver no. 3 balloon the end of it looks like ‘the ghost’ but I moves exactly the same as the top of the silver balloon at top of screen once you see it you can’t unsee it.”

And another commenter wrote: “It’s some sort of reflection you can see a silver balloon reflection also.”

Most read in The Irish Sun

Earlier this year, paranormal investigators told how they believe they have captured images of a ghost in the window of an abandoned asylum.

And after examining images taking during the visit, the gang believe they caught the spirit of a child looking out at us from the window in some of their images.

Recounting the visit, Richard Morrison said: “We travelled there last week to have a look at the building as we have been told this building holds a lot of negative energy.

“From speaking to locals they have informed us that the asylum is haunted.

“We walked around the outside and had taken lots of pictures, and this image stands out for us.”

The asylum, built in 1868, was by far the largest public building in the county at the time of its construction.