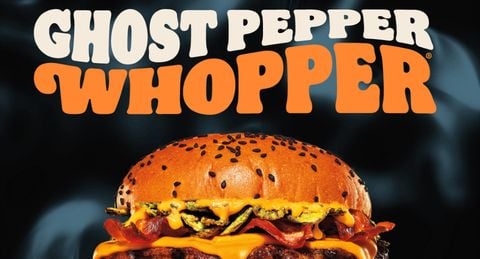 Burger King is encouraging consumers to become amateur ghost hunters with the app integration timed for Halloween. The campaign could appeal to people who enjoy reality shows and movies that depict paranormal sleuths trying to make contact with the dead, or those who are simply looking for a different type of at-home activity for the fall season.

A new “Home of the Ghosts” ad depicts a woman scrolling through her phone in bed while home alone until she’s startled to find out she may have company from the other side. Initially frightened by the paranormal goings-on, she’s relieved when her BK App reveals Whopper rewards and eventually enjoys a meal with her invisible companion.

The ghost detector itself purports to track electromagnetic field activity, a common tactic among seasoned hunters (though one that’s drawn plenty of skepticism). Burger King could generate stronger engagement for the mobile tech by tying it to rewards for a limited-time Whopper that comes on an orange bun evoking pumpkins and autumnal hues. The spicy take on the Whopper hit restaurants nationwide Oct. 10, while the ghost detector and exclusive offer for Royal Perks members runs Oct. 17-31.

The marketer has previously cooked up frightful menu offerings to drive ordering around the spookiest holiday. In 2018, Burger King introduced the Nightmare King, a sandwich on a sickly green sesame bun that was alleged to interrupt sleep cycles and cause nightmares. Another seasonal iteration of the Whopper that captured consumer attention was served on a striking black bun — and produced some interesting results. A similar promotion running in Canada this year promotes the ghost detector and centers on a Whopper dripping with black garlic sauce.

Burger King leaning more heavily into mobile could help combat slumping sales. Earlier this fall, parent Restaurant Brands International introduced a Reclaim the Flame initiative to turn the brand around in the U.S. The program involves a $150 million marketing investment and $250 million in upgrades to restaurants. One of the mandates behind Reclaim the Flame is to recenter focus on the Whopper.

On the marketing front, Burger King last week unveiled a refreshed brand positioning and campaign that plays on the classic “Have it Your Way” tagline to throw a spotlight on customer personalization. It was developed with the company’s new creative agency of record for the U.S., OKRP.