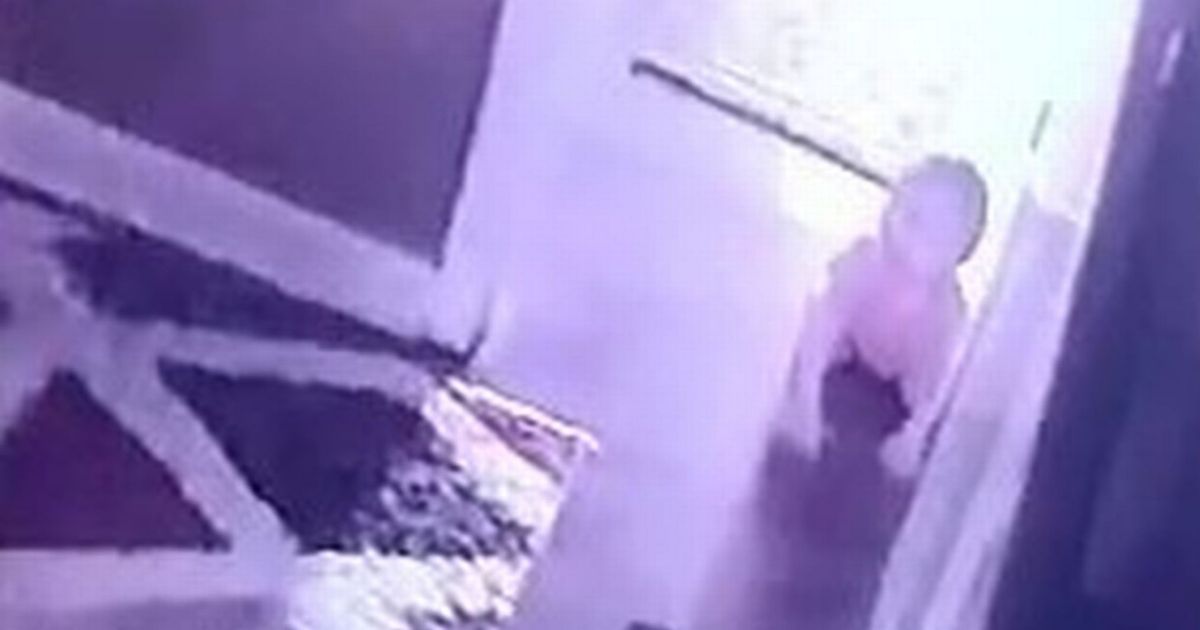 A terrified mum has revealed that she now believes her house is haunted after capturing footage of what she claims is a ghost pushing her baby over on CCTV.

Ashley Scott, 34, has claimed that the home she resides in is riddled with ghosts and she now fears for her tot’s safety.

Recalling the moment she saw the eerie footage, Ashley said she was at the supermarket when her partner Chris Geisler, 38, sent her the eerie clip after noticing their baby fell in an unusual way earlier this month.

The creepy video, filmed on the couple’s home security camera, shows their one-year-old, Gavin, crawling into his parent’s bedroom where dad Chris was watching TV.

All of a sudden, the little one can be seen stopping – on all fours – as he looks in awe at his dad for a couple of seconds before suddenly jolting forward as if he is pushed from behind.

The stunned baby, who almost face-plants the floor, then turns around to find whatever ‘pushed’ him – only for there to be nothing visible there.

However despite there being nothing there, the mum says she has felt other paranormal experiences in the home, and believes that a ghost was responsible for the shove.

Ashley went on to add that she now fears what other ‘forces’ may do to her baby next.

The mum, from Elizabethton, Tennessee, US, said: “I was actually grocery shopping down the road and Chris sent me a video because it really freaked him out.

“He was just baffled by what he saw and said ‘what do you think of this?’ and I was just freaked out, I didn’t know what to really think.

“Chris saw it at the time and watched the footage back because he was confused – he didn’t know if maybe he just stumbled but it looked really strange to him.”

She continued: “So he went back on the footage and looked and it just seems a little odd.

“He was just crawling into our bedroom and he was looking at his dad and then the next thing you know it’s like something had pushed him.

“It’s just weird. It’s too odd, I’ve never seen a child fall like that. He was on all fours, on his hands and knees – I don’t think he lost his balance or anything, he’s a very strong baby.”

The 34-year-old went on to say that because her son turned around, “he noticed something like something was there,” adding that: “You don’t just look back like that naturally unless you expect something to be there.”

Gavin’s mum said that she does not believe he feel by himself, and thinks that “something” pushed him, adding “I hope nothing like that is going on or hurting him but it sort of seems that way.

“It’s just creepy. I was really upset and worried about him – like ‘what would do that?'”

The stay-at-home mum went on to say that has always been a believer in the paranormal, and has had numerous mysterious experiences throughout her life.

And it all started from when she was a child and saw a ghost in her bedroom which she says scared her but seemed harmless.

Recalling this memory, Ashley said: “I’ve had things when I was younger, when I was a little girl – I remember seeing a little boy in my bedroom.

“Me and my sister shared a room when I was younger and the first thing I ever experienced, I was sleeping in my room and I woke up and saw a little boy.

“He was just standing there next to my sister’s bed and it really freaked me out.”

She then said that she had never experienced anything like that again, up until moving into the condo she is now, saying: “It seems like the condo is haunted because there are too many odd things we can’t explain.

“We just kind of dealt with it before because it never seemed to harm any of us but now this has happened we think very differently about it.”

Despite living in the apartment for three years, the couple claim they have experienced multiple inexplicable things that they believe to be paranormal activity.

However, they added that they have lived in harmony with whatever otherworldly being is responsible for the unusual activity in their home – up until this point – as nothing ‘violent’ has ever occurred.

But now that little Gavin has been pushed, the parents fear for his safety at the hands of other forces and say they may be forced to move if anything else happens, with Ashley explaining: “We’ve experienced a few odd things in the home like noises and things like crashing and we can’t explain what the crash was.

“About two years ago it sounded like the pots and pans crashing across the other end of the apartment and we went to look for what it might have been and we just couldn’t find anything.

“The pots were fine, nothing had crashed, but the sound – you can’t mistake that. Something did it, we just can’t find out what did it.”

The mum added that she has “always kind of accepted it” because it has never bothered her that there is ‘something else’ there, but now that incident happened with her one-year-old, she is becoming worried.

She clarified, saying: “Nothing violent has ever happened in the past.

“But when that happened to Gavin it started really worrying me because if he’s going to get pushed – that really freaked me out. I’m definitely on edge, we all are.

“I’m a stay at home mum and I’m always around Gavin so he’s always protected as much as I can protect him but it scares me because you don’t know what any other force might be able to do.”